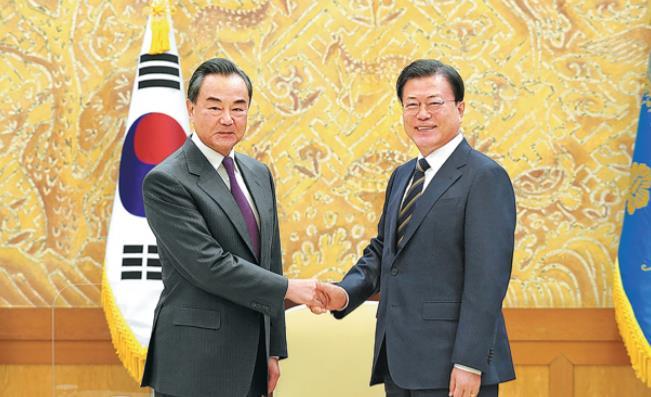 State Councilor and Foreign Minister Wang Yi (left) and Republic of Korea President Moon Jae-in greet each other during their meeting in Seoul on Thursday. (Photo: AFP)

Beijing and Seoul have agreed to launch the China-Republic of Korea diplomatic and security "2+2" dialogue as well as a bilateral dialogue on maritime affairs.

The two new dialogues were part of a 10-point consensus reached at the meeting between State Councilor and Foreign Minister Wang Yi and ROK Foreign Minister Kang Kyung-wha in Seoul on Thursday.

The Chinese Foreign Ministry called the talks "productive", as the outcomes also include agreeing to set up a committee charting the future development of China-ROK relations.

The two sides aim to take the 30th anniversary of the establishment of bilateral diplomatic relations in 2022 as an opportunity to plan the ties' growth over the next 30 years.

Also, the two sides agreed to hold a new round of high-level strategic dialogue between their diplomatic departments, enhance mutual trust in diplomacy and security and promote cooperation in maritime affairs.

During his talks with Kang, Wang said his visit to the ROK showed the great importance China attaches to bilateral ties as well as China's great confidence in the ROK's efforts to overcome the pandemic.

As strategic partners, China and the ROK should work together to follow the strategic guidance of the heads of state, deepen cooperation in various fields, maintain regional peace and stability, promote the process of regional integration, and actively participate in the reform of the global governance system, Wang said.

Wang expressed the hope that the ROK will properly handle sensitive issues between the two countries and safeguard the basis of bilateral mutual trust and cooperation.

Kang said the bilateral strategic cooperative partnership has maintained positive momentum for growth in recent years, and the two countries set an example for the international community by working together to fight the pandemic.

The ROK is ready to follow the lead of the heads of state, constantly enrich bilateral relations and formulate long-term plans for their growth, she said.

Kang added that Seoul is willing to study the Global Data Security Initiative put forward recently by China, and it looks forward to strengthening communication and coordination with China on issues such as tackling climate change, as well as safeguarding multilateralism and free trade.

On the trade front, the two sides agreed on Thursday to reach an agreement at an early date on the second phase of the China-ROK free trade agreement, and they agreed to produce a joint plan for bilateral economic and trade cooperation in 2021-25.

Beijing and Seoul also agreed to work with Tokyo to actively promote the negotiation process of the China-Japan-ROK free trade agreement.

The two sides agreed to continue to work together to maintain peace and stability on the Korean Peninsula and promote the process of the political settlement of the peninsula issue.

Wang relayed a message from President Xi Jinping to Moon, and the ROK leader expressed appreciation for Xi's message.

In addition to bilateral ties, the two sides exchanged views on the peninsula situation. Moon spoke highly of China's constructive role in the peninsula's peace process, and Wang said the commitment to dialogue for settling the peninsula issue should not be altered.