BEIRUT, Aug. 7 (Xinhua) -- The huge explosions that smashed Port of Beirut on Tuesday will have a tremendous negative impact on the Lebanese economy which has been suffering from the most serious crisis in its history, local experts say. 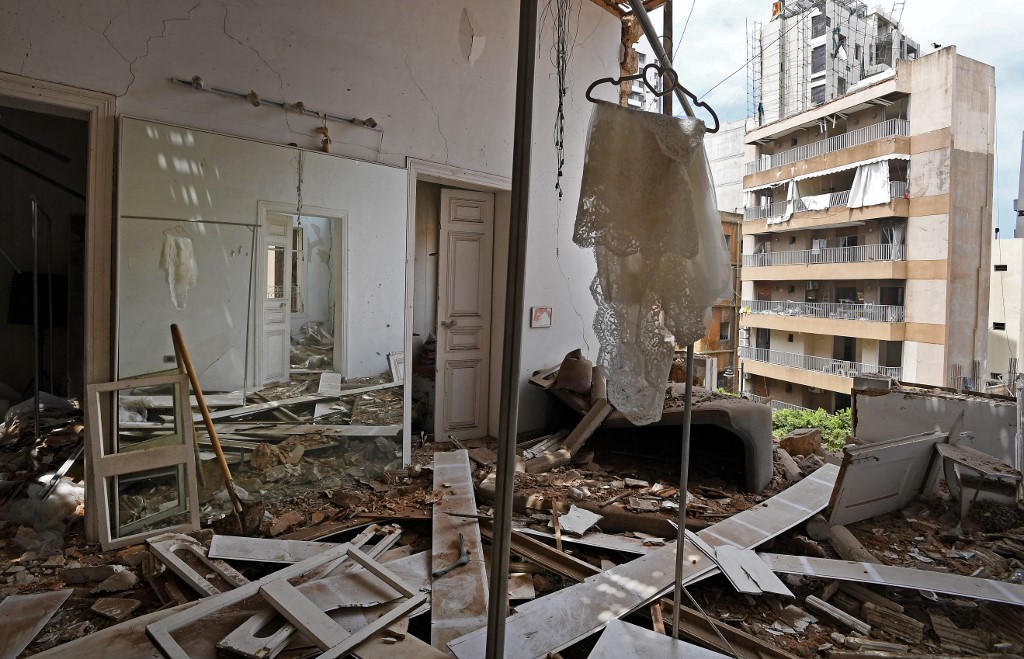 "Lebanon's economic crisis had already reduced the profit through Port of Beirut from 20 million U.S. dollars to less than 10 million dollars per month. Now, as 80 percent of the port is destroyed, we can no longer expect any profit or benefit from this facility," Patrick Mardini, president of the Lebanese Institute for Market Studies, told Xinhua.

Mardini added that shops and factories that were operating ahead of the explosions generated profit for their owners and salaries for employees, but most of them have been partially or totally destroyed by the disaster.

"It is as if we had a tree that produces fruits but then the tree was uprooted," he said.

Ahead of the explosion, the Lebanese economy was already suffering from an unprecedented crisis amid shortage in U.S. dollar and a weak local currency with complications for traders to import products, driving thousands of companies and shops out of business while laying off thousands of employees.

The outbreak of COVID-19 exacerbated the crisis by halting businesses given the long periods of lockdown imposed to contain the spread of the virus.

The huge explosions happened on Tuesday at around 6:10 p.m. local time (1510 GMT), and shook buildings all over Lebanon's capital while causing heavy damage.

Damage was estimated by Beirut's governor at around 3 to 5 billion dollars.

Pierre Khoury, dean of the Faculty of Business and Insurance at the Lebanese German University, told Xinhua that the destruction of Port of Beirut constitutes a blow to the heart of the Lebanese economy.

"We all know that Lebanon's economy relies on import to a great extent. We import our basic needs such as wheat and flour through the port in addition to other products consumed by the Lebanese, not to forget the materials that are used in agriculture and industry," Khoury said, adding that Port of Beirut is the main source of the added value generated for the Lebanese economy.

Khoury noted that Lebanon has also lost the products that were stored at Port of Beirut, which were supposed to enter the Lebanese market for consumption by citizens.

He added that the collapse of the city will also weigh heavily on big companies operating in Lebanon.

"These companies were already suffering from the economic crisis. This new disaster will prevent many of them from maintaining their operations in the country," he explained.

Adnan Rammal, representative of the trade sector in the Economic and Social Council, told Xinhua that losses from the destruction of Port of Beirut include the loss of jobs for people who work at the facility.

"We have also incurred big losses when it comes to the land fleet that transport products from and to Lebanon," Rammal said.

He noted that hundreds of thousands of containers arrive in Lebanon through Port of Beirut to supply the local market with needed products and secure the material for industrialists.

"Lebanon's industry sector today will be greatly impacted as the country exports a big volume of its locally manufactured goods through the port while Syria also relies on the port to receive some of its needs through this vital facility," Rammal added.

Experts believe that Lebanon must try and rely mainly on its capacity to deal with the repercussions of this huge disaster.

Khoury said this may be an opportunity for Lebanon to strengthen its industry sector while encouraging the Lebanese to consume locally manufactured goods rather than importing most of the needs.

"Again, while the efforts are worth it, this may be difficult if we lack necessary materials to produce locally our basic needs," Khoury explained.

Maridini emphasized the need to invite foreign companies to reconstruct and manage the port, saying "the government does not have the capacity of rebuilding the port."

Beirut port is one of the most important logistics hubs in the eastern Mediterranean, providing a strategic link among the markets of Asia, Europe and Africa.

Ahmed Tamer, director of the port of Tripoli, the largest city in northern Lebanon, announced on Thursday that Tripoli's port is ready and capable of playing a role to temporarily replace Beirut's port following the explosion.

Investigations into the explosions are currently ongoing with primary information revealing that Ammonium Nitrate stored since 2014 in a warehouse at Port of Beirut may have caused the explosions.

The accident killed at least 137 people and injured about 5,000 others with death toll expected to rise as dozens of people are still missing and local and foreign rescue teams are searching for victims under the rubble.