Authorities in Belarus blocked more than 50 news media websites that were covering weeks of protests demanding that authoritarian President Alexander Lukashenko resign but protesters still turned out again Saturday, some forming a chain of solidarity in the capital. 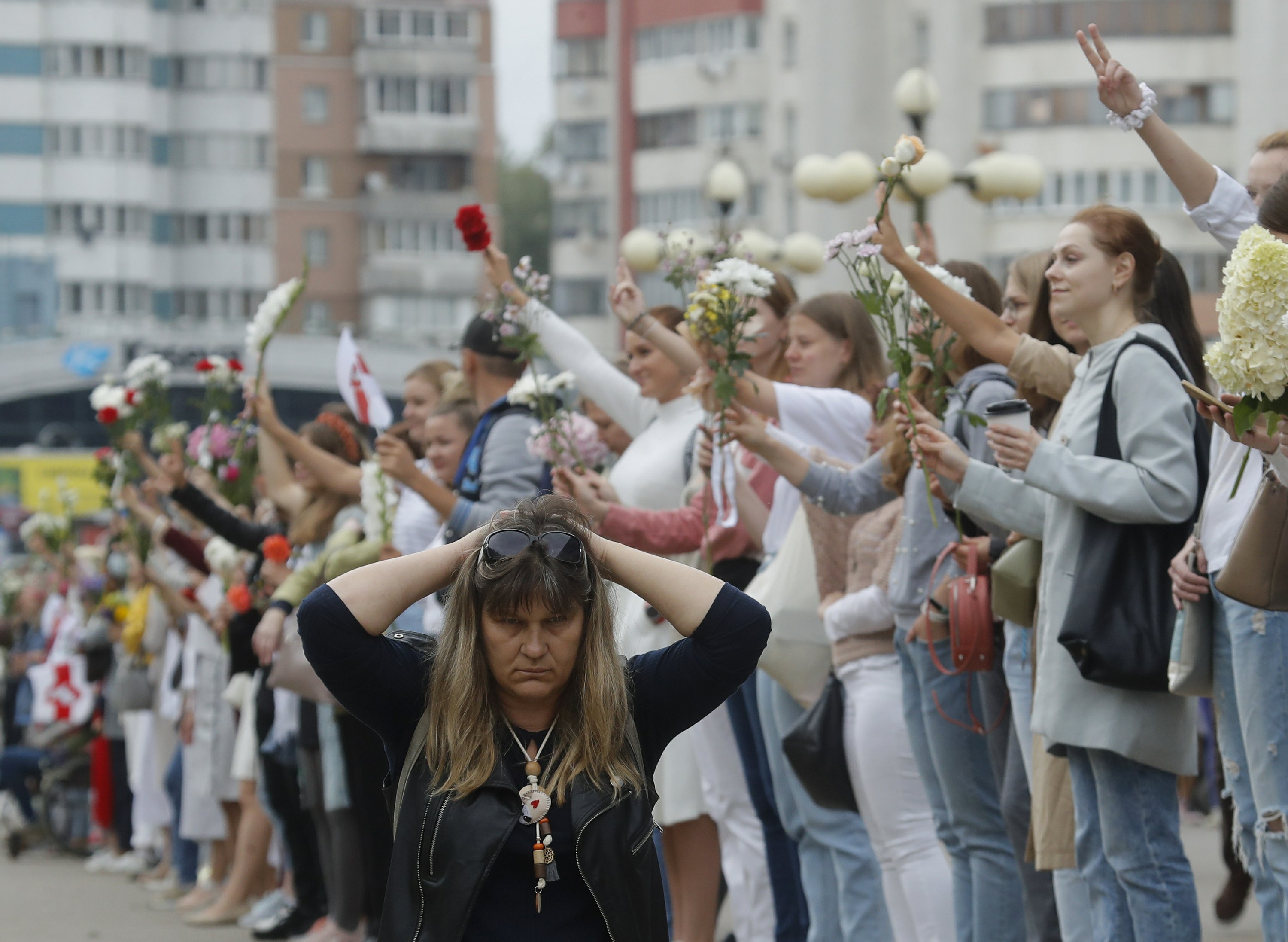 A woman kneels on the ground as people create a human chain during a protest in Minsk, Belarus, Saturday, Aug. 22, 2020. (Photo: AP)

Protests unprecedented in Belarus for their size and duration broke out after the Aug. 9 presidential election, in which election officials say Lukashenko won a sixth term in a landslide. Protesters allege the officials results are fraudulent and are calling for Lukashenko to resign after 26 years in power.

Police responded harshly to the protests at first, arresting 7,000 people and beating many of them. But the police crackdown only widened the scope of the protests, and now anti-government strikes have been called at some of the country's main factories, former bases of support for Lukashenko. Some police have posted videos of themselves burning their uniforms and quitting in disgust at the government's response.

In an enormous show of defiance, an estimated 200,000 protesters rallied Aug. 16 in the capital, Minsk. Lukashenko's main election challenger, Sviatlana Tsikhanouskaya, has called for another massive show of opposition this Sunday.

"We are closer than ever to our dream," she said in a video message from Lithuania, where she took refuge after the election, knowing that some previous presidential challengers in Belarus had been jailed for years.

Public shows of support for Lukashenko, who has ruled Belarus with an iron fist since 1994, have been comparatively modest. A pro-government rally in Minsk on Aug. 16 attracted about a quarter as many people as the protest march. On Saturday, only about 25 people showed up for a bicycle ride to support the president.

On Saturday, hundreds of women dressed in white formed a human chain in Minsk as sign of protest. Another demonstration in the evening was attended by 3,000 people.

"Threats, intimidation, blocking no longer work. Hundreds of thousands of Belarusians are telling him 'go away'' from all corners and squares," said Anna Skuratovich, one of the women in the chain.

Protesters say they are fed up with the country's declining living standards and have been angered at Lukashenko's dismissal of the coronavirus pandemic, as well as his decades of repressing dissent.

"Lukashenko can't propose anything other than tears for the USSR, bans and truncheons," said Tatian Orlovich, in the crowd at the evening protest.

Lukashenko alleges that the protests are inspired by Western forces including the United States and that NATO is deploying forces near Belarus' western border. The alliance firmly denies that claim.

The 65-year-old leader renewed the allegation Saturday during a visit to a military exercise in the Grodno region, near the borders of Poland and Lithuania.

"You see that they are already dragging an 'alternative president' here," he said, referring to Tsikhanouskaya. "Military support is evident — the movement of NATO troops to the borders."

Lukashenko later spoke to a rally of several thousand supporters in Grodno, where he threatened to close factories that are on still strike as of Monday. Strikes have hit some of the country's major companies, including vehicle and fertilizer manufacturers, a potential blow to the largely state-controlled economy that has been struggling for years.

Authorities on Friday threatened demonstrators with criminal charges in a bid to stop the protests. Investigators also summoned several opposition activists for questioning as part of a criminal probe into a council they created with the goal of coordinating a transition of power for the former Soviet republic of 9.5 million people.