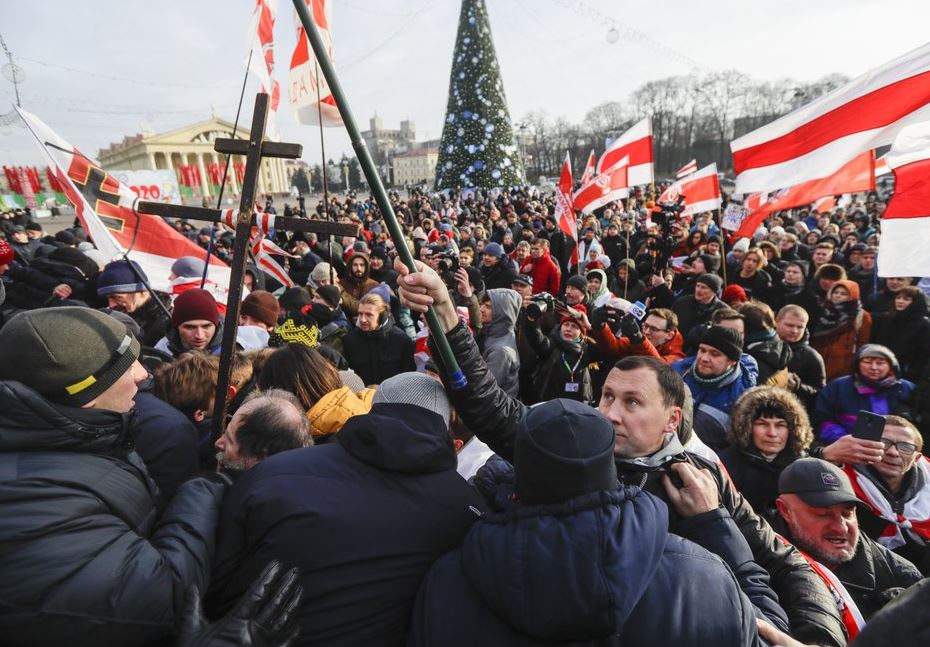 The leaders of Russia and Belarus sat down for talks Saturday on deepening ties between the two allies — a meeting that triggered a protest in the Belarusian capital.

More than 1,000 opposition demonstrators rallied in Minsk to protest closer integration with Russia, which they fear could erode the post-Soviet independence of Belarus, a nation of 10 million. The protesters marched across the Belarusian capital, chanting “No to integration!” and “Belarus to Europe!”

Russian President Vladimir Putin hosted Belarusian President Alexander Lukashenko for talks in Sochi, on Russia’s Black Sea coast, to discuss economic agreements intended to bring the two ex-Soviet neighbors and allies even closer. Lukashenko, who has ruled Belarus with an iron fist for more than a quarter-century, relies on cheap Russian energy and loans to maintain his country’s Soviet-style economy.

Russia and Belarus signed a union agreement in 1997 that envisaged close political, economic and military ties, but stopped short of forming a single nation.

The Kremlin has recently cranked up the pressure on Belarus, raising energy prices and cutting subsidies. Russian officials say Minsk should accept closer economic integration if it wants to benefit from lower energy prices.

Speaking at the start of talks in Sochi, Lukashenko urged Putin to continue sending fuel shipments at Russia’s domestic prices.

“We just want equal conditions — nothing else,” Lukashenko said with a wry smile as he faced Putin across the table.

“We shall talk about future prospects. It’s a landmark meeting,” Putin said.

Some in Belarus fear that the new agreements could pave the way for a full merger of the two countries, concerns fueled by Russia’s 2014 annexation of Ukraine’s Crimean Peninsula.

There also has been speculation that Putin, who has been in power for nearly two decades, could contemplate a merger with Belarus as a way to stay at the helm of the union state of Russia and Belarus after his current presidential term expires in 2024.

“The Kremlin no longer wants to pay for rhetoric and is starting to demand political concessions from Minsk ahead of 2024, in a hint at the new state and the new job for Putin,” said Valery Karbalevich, an independent Minsk-based political analyst.

Putin himself has been coy about his future plans.

Lukashenko has bristled at the Russian pressure, charging that some Russian officials want to push Belarus into weakening its sovereignty. The Belarusian leader has vowed not to surrender Belarus’ post-Soviet independence, but the opposition in Belarus has remained nervous.

“Politicians are playing with Belarusian sovereignty like in a card game, and we will keep protesting as long as a threat to our independence remains,” said Pavel Severinets, the organizer of Saturday’s rally.

The protest wasn’t sanctioned by the authorities, but police allowed the demonstrators to march across downtown Minsk.

“They are again trying to pull us back into that rotten empire that is trying to revive itself at the expense of neighbors,” said 19-year-old student Mikhail Olshansky, who covered his face with Belarus’ pre-Lukashenko red-and-white flag.

Lukashenko has shown little tolerance for dissent, earning him the nickname of Europe’s last dictator, but he has increasingly sought to reach out to the West as he faces pressure from Russia.

The US and the European Union have repeatedly criticized Belarusian authorities for flawed elections and crackdowns on the opposition, but they have lifted some their sanctions in recent years as Belarus freed political prisoners.

“Minsk is playing a simple game, trying to win advantages for its Soviet-style economy by threatening to break the union with Russia and get closer to the West,” Karbalevich said. “That is the reason why repressions against the opposition were put on standby. Lukashenko doesn’t want to wake up one day as a provincial governor in Russia.”