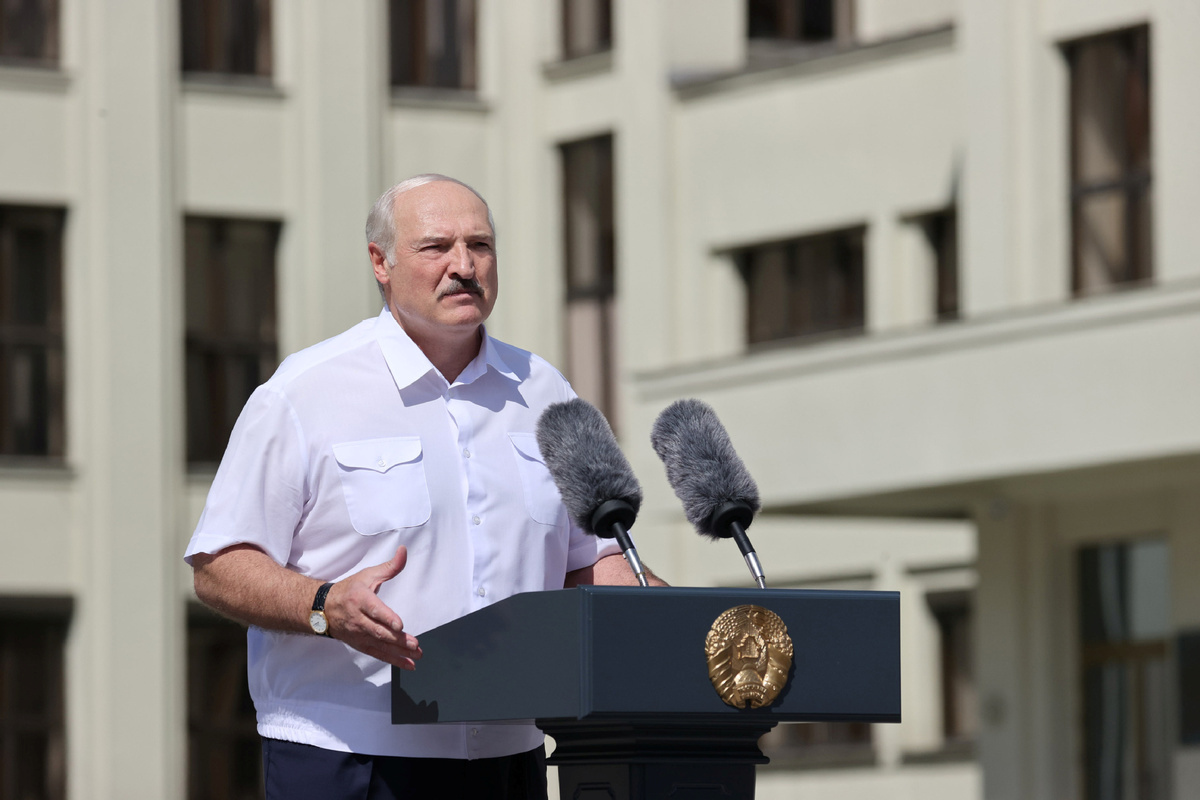 Belarusian President Alexander Lukashenko speaks during a rally of his supporters near the Government House in Independence Square in Minsk, Belarus, August 16, 2020. (Photo: Agencies)

Belarusian President Alexander Lukashenko said his Russian counterpart has pledged to support and offer security assistance in the case of external military threats, if requested by Belarus.

According to Belarusian state news agency BelTA, Lukashenko had a telephone conversation with Vladimir Putin on Saturday, and the two presidents made an agreement "as far as military matters are concerned".

Saturday was the seventh consecutive day of large protests against the results of the country's Aug 9 presidential election in which election officials announced the 65-year-old Lukashenko won a sixth term in a landslide. It was reported that the police have cracked down against the protesters and detained some 7,000 people so far.

Opposition supporters claimed that the election figures were manipulated and protesters have been beaten mercilessly by police since the vote. Tikhanovskaya insisted she won support ranging from 60 percent to 70 percent.

"I had a long and thorough discussion about the situation with the president of Russia. And I was a bit surprised by how up to date he is on what's going on," Lukashenko said.

"He and I agreed: at our request they will provide comprehensive security assistance to ensure Belarus's security."

Lukashenko did not specify what sort of assistance Russia would be willing to provide. But he said "when it comes to the military component, we have an agreement with the Russian Federation", referring to a mutual support deal the two former Soviet republics signed back in the 1990s.

The President of Belarus also noted the buildup of the military component in neighboring Poland and Lithuania, where NATO military exercises are held.

"I am more worried about the situation that is unfolding on the territory of our neighboring states－Poland and Lithuania. As you know, military exercises of NATO troops are taking place there. That would have been fine, but there is an escalation and a buildup of the armed component in these territories," Lukashenko said hours after the phone talks with Putin.

The EU will offer to Minsk its assistance in the dialogue with the opposition to settle the current crisis in the country, the EU foreign ministers said in a statement after a video conference on Friday.

US Secretary of State Mike Pompeo said Saturday that he was glad to see that some protesters in Belarus had been freed, but that it was not enough. He also said the presidential election in Belarus fell short of democratic standards.

In another development, a funeral was held Saturday for Alexander Taraikovsky, a 34-year-old protester who died Monday in the capital of Minsk. Belarusian police said he died when an explosive device he intended to throw at police blew up in his hand.