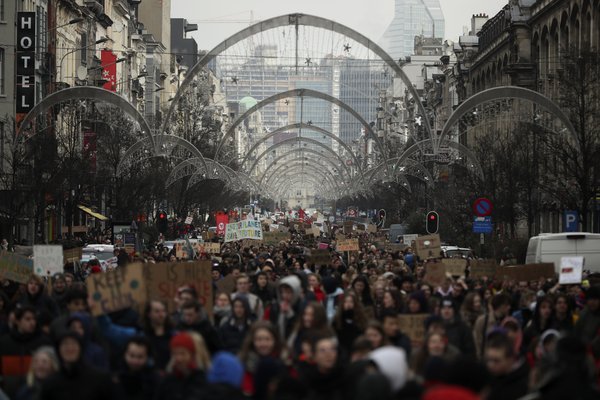 Thousands of youngsters march during a climate change protest in Brussels, Thursday, Jan. 31, 2019. Thousands of teenagers in Belgium have skipped school for the fourth week in a row in an attempt to push authorities into providing better protection for the world's climate. (AP: Photo)

A Belgian environment minister resigned Tuesday after claiming she had confirmation from state security services that massive climate demonstrations in recent weeks were staged as a plot against her.

Though regional environment minister Joke Schauvliege initially failed to step down after admitting she had no such information from intelligence officials, she resigned after talks with her party leadership.

“I said something that was not correct,” Schauvliege said, but insisted it didn’t amount to lying.

The opposition said it was outrageous to lie and abuse the name of the state security organization for personal purposes and also said she sought to discredit a just cause that is widely shared in the nation.

“This way, it is tough to continue on as climate minister,” she said at an emotional news conference.

Over the past two months, tens of thousands of protesters have demonstrated across Belgium for better climate protections and have often targeted Schauvliege’s policies, which they consider woefully insufficient.

At first she welcomed the marches, but over the weekend, she said “a lot of people in these marches don’t realize that they are part of a system which is a setup.” She added that “state security has told me about this.”

In her apology, she said she overreacted because of social media criticism and lack of sleep.

Anuna De Wever, the 17-year-old driving force behind the Thursday student protests that gathered up to 30,000 demonstrators, said she was dumbfounded when she heard it. “At first, I had to laugh really hard,” she told VRT network, denying she was a pawn in a plot against anyone.

A new march of schoolchildren and students is set for Thursday. Two weeks ago, 70,000 demonstrators took to the streets of Brussels for the biggest march up to now.

Schauvliege was the environment minister for northern Belgium’s Flanders, the biggest, most populous and richest area of Belgium.

A previous version of this story has been corrected to show that the first name of the 17-year-old protest organizer is Anuna, not Aruna.