WORLD Belgian judge to decide next phase in Spain-Catalonia fight

Belgian judge to decide next phase in Spain-Catalonia fight 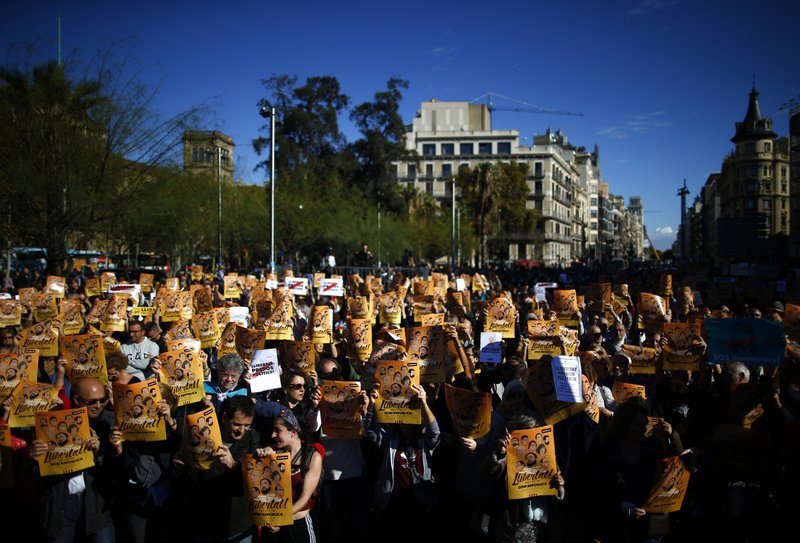 The fight between Spain and Catalonia’s separatists reached a Belgian judge Sunday after the region’s deposed leader and four ex-ministers surrendered in Brussels to face possible extradition to Madrid for allegedly plotting a rebellion.

Hours after former Catalan regional president Carles Puigdemont and the others turned themselves in to Belgian authorities, Puigdemont’s party put him forward as its leader for an upcoming regional election called by the Spanish government. The choice means he could end up heading a campaign from Brussels while he fights a forced return to Spain.

The five Catalan politicians who fled to Belgium after Spanish authorities removed them from office on Oct. 28 were taken into custody Sunday on European arrest warrants issued after they failed to show up in Madrid for questioning.

A Belgian investigative judge had 24 hours after their voluntary surrenders — 9:17 a.m. local time on Monday — to decide whether to jail them or let them free in Belgium while the extradition process takes it course.

The judge also has the option of not detaining them but imposing conditions on their freedom, such as orders to remain in Belgium, Deputy Public Prosecutor Gilles Dejemeppe told The Associated Press.

Dejemeppe said the extradition process could take more than 60 days, well past the Dec. 21 date set for the regional election in Catalonia.

Spanish government spokesman Inigo Mendez de Vigo has said that any politician can run in the election unless he or she has been convicted of a crime.

Puigdemont and the four ex-ministers left for Belgium last week as the Spanish government, seeking to quash Catalan separatists’ escalating steps to secede, applied constitutional authority to take over running the region.

The officials said they wanted to make their voices heard in the heart of the European Union and have refused to return to Spain, alleging they could not get fair trials there.

Nine other deposed Catalan Cabinet members, however, heeded a Spanish judge’s summons for questioning in Madrid on Thursday. After questioning them, the judge ordered eight of them to jail without bail while her investigation continues. The ninth spent a night behind bars before posting bail and being released.

Whether in Brussels or Barcelona, Puigdemont is at the heart of political jockeying for position to start a campaign that promises to be as bitter as it is decisive to Spain’s worst institutional crisis in nearly four decades.

While parties try to rally support to win back control of Catalonia’s regional parliament, pro-secession parties are debating whether or not to form one grand coalition for the upcoming ballot.

Another former president of the region, Artur Mas, told Catalan public television on Sunday that he backed a fusion of parties for the December vote. Bus Mas, the first Catalan leader to harness the political momentum for secession, said the main goals of secession supporters must be recovering self-rule and the release of the jailed separatists.

“If we add the issue of independence, we won’t get as many people to support us,” Mas said.

An opinion poll published by Barcelona’s La Vanguardia newspaper Sunday forecasts a tight election between parties for and against Catalonia ending the region’s century-old ties to the rest of Spain.

The poll predicts that pro-secession parties would win between 66-69 seats. They won 72 two years ago. Sixty-eight seats are needed for a majority.

Puigdemont and his fellow separatists claim that a referendum on secession held on Oct. 1 gives them a mandate for independence, even though it had been prohibited by the nation’s highest court, polled only 43 percent of the electorate, failed to meet international standards and was disrupted by violent police raids.

Catalonia’s Parliament voted in favor of a declaration of independence on Oct. 27. The next day, Spain’s central government used the extraordinary constitutional powers to fire Catalonia’s government, take charge of its administrations, dissolve its parliament and call the December election.

Hundreds of pro-secession Catalans gathered in towns across the region Sunday.

“We want to send a message to Europe that even if our president is still in Brussels and all our government now is in Madrid jailed, that the independence movement still didn’t finish, protester Adria Ballester, 24, said in Barcelona.