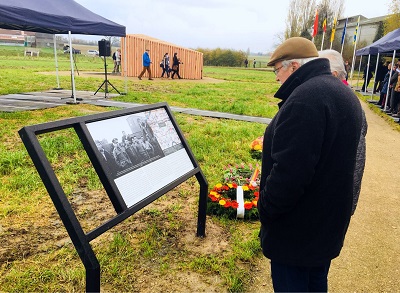 Poperinge, Belgium (People's Daily) – A three-meter-tall bronze statue was erected in a historic place in Belgium on Wednesday to commemorate the anniversary of the 13 Chinese laborers killed in a German bombardment in World War I.

The site where the statue stands is the place occupied by a camp used for the 13 Chinese laborers. It is near the village of Busseboom in Poperinge, Belgium.

Under the scheme of “laborers-as-soldiers,” around 140,000 Chinese young men aged 25 to 30 came to West Europe, providing logistical services to the Allied Forces, who at that time were suffering a severe manpower shortage.

About 20,000 of these laborers never made it back to their motherland. Some died of illness and tough working conditions, while others from attacks like the one in Poperinge.

Wreaths were laid in front of the statue by Poperinge  Mayor Christof Dejaegher, Chinese Ambassador to Belgium Qu Xing and British Ambassador Alison Rose, among other Chinese and Belgian dignitaries. 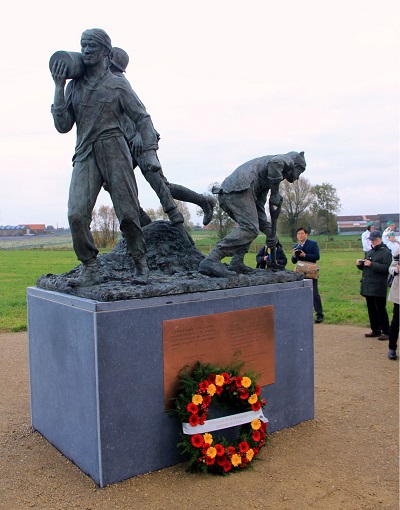 “Entering the third year of the war, millions of soldiers died in the battlefields, and all the belligerent parties felt a serious manpower shortage. To some extent, those who can ensure their logistical supply will win the war,” said the Chinese ambassador in an emotional speech to the crowd.

“We think it is indispensable for our generation who enjoy peace to build a monument to commemorate them, about 20,000 Chinese laborers-as-soldiers who devoted their lives to come to a place they had never been, and to help a people they had never met," said Qu.

“We are standing here at a historic place. This site offers testimony to the many sacrifices made by the members of the Chinese Labor Corps throughout and after the end of the First World War,” said the British ambassador.

“We must admit that the contributions made by the Chinese Labor Corps were not well recognized at the end of the war. I am grateful for the efforts undertaken by the local authorities and by the Chinese Embassy to give them the recognition they deserve.

They did essential work to support the frontline troops such as unloading ships and building dugouts, and were therefore of key importance to the successes of the Allied Forces in the final days of WWI.

After the war ended, they stayed in the region to help clear mines, recover the bodies of soldiers and fill in miles of trenches, helping the locals restore their lives that were put on hold in 1914, Rose said.

"We find it important because this part of WWI history was almost forgotten. It's a pity. The Chinese lived here, worked here, fought for our freedom. We want to commemorate their contributions to our victory," the mayor said.