Sirens are set to wail before streets fall silent on Tuesday in Belgium as the country holds a day of mourning for the victims of the devastating floods that left nearly 200 dead in western Europe. 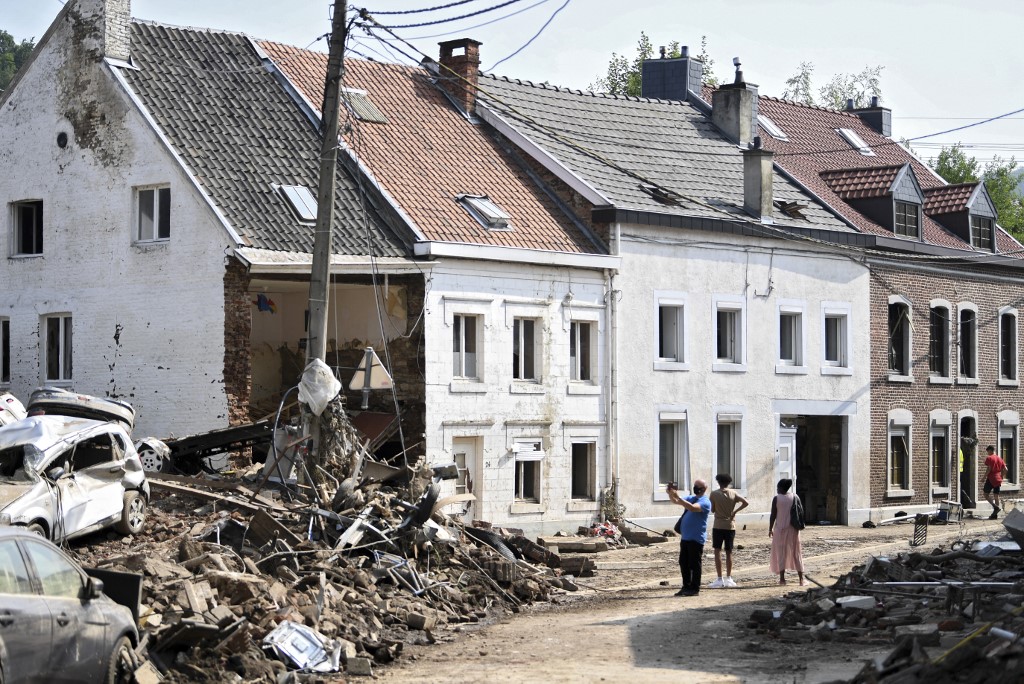 Residents walk among the destroyed buildings in Pepinster, near Liege, on July 19, 2021, following heavy rains and flooding across areas of France, Belgium, Germany and The Netherlands. (Photo: AFP)

Heavy rains last week sent torrents of floodwaters sweeping through towns and villages, mostly in Germany and Belgium in the worst deluge in living memory.

At least 31 were killed in Belgium alone, with dozens still missing or unaccountable, while in Germany 165 were killed and rescuers are still scouring the rubble for victims.

The number of missing in Belgium has fallen over the past two days as telephone contact is re-established and more people are traced.

The clean-up is still under way to help the regions hit hardest recover from the scenes of destruction that saw dozens of homes collapsed and cars piled on top of each other.

Waters have subsided since Friday but workers and volunteers face a mammoth task to clear away the detritus and help local residents rebuild their shattered lives.

Belgium's King Philippe and Prime Minister Alexander De Croo are set to visit the ravaged city of Verviers for an official ceremony of homage before emergency workers sound their sirens and a nationwide minute of silence is held at midday.

Buses, trams and metro trains will come to a halt in Brussels and the country's athletes preparing for the Olympics in Japan will mark the moment.

The Belgian tricolour was already being flown at half-mast on official buildings, as was the star-spangled flag of the European Union around the bloc's headquarters in the capital.

The day of mourning comes ahead of Belgium's national holiday on Wednesday -- but events for that are set to be sombre as the country still reels from the flooding.

In neighbouring Germany, Chancellor Angela Merkel was due to meet victims of the deluge still struggling to come to terms with the losses.

The number of people missing remains unclear, mainly because of disrupted communication networks.

As the scale of the flood disaster became clearer, questions mounted in Germany about whether enough was done to warn residents ahead of time.

The German government on Monday pledged to improve the country's under-fire warning systems as a spokeswoman admitted that the tragedy had shown authorities "need to do more and better".

Although meteorological services had forecast torrential rain and flash floods, many residents said they were caught off-guard by rapidly rising waters.

The disaster has catapulted climate change to the top of the agenda in Germany, ahead of September's polls that will mark the end of Merkel's 16 years in power.