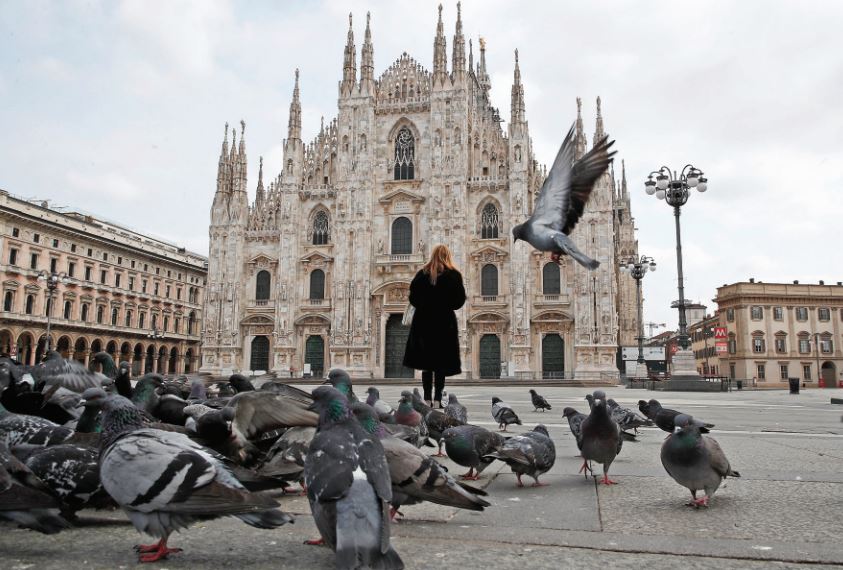 A lone woman feeds pigeons outside the usually busy Duomo gothic cathedral, in downtown Milan, Italy, on March 22. The Northern Italian city has become a ghost town under lockdown measures that remain in place. (Photo: AP)

Most Italians have had their lives put on hold as a result of the nationwide lockdown aimed at limiting the spread of the novel coronavirus.

Daniele Cologna, who lives in the fashion hub of Milan, capital of Lombardy, the most severely affected region of Italy, is among them.

Cologna's previous daily routine of extensive traveling and socializing has been replaced with him having to do almost everything from home. He ventures out once a week to shop for provisions.

"Milan is eerily quiet and empty," he said. "Most of the people here abide by the lockdown rules and stay at home. We are told to limit our going out of home to a range of 500 meters, either to go walk your dog or buy some groceries."

Cologna said there has been some enforcement of the rules and each resident has been asked to carry a self-compiled notice, stating his or her purpose for going out. Police officers may check the document and transgressors can be fined.

Panic buying was an issue in the early days of the lockdown but it is not now, he said. Supermarkets are open and well stocked, and there are no shortages, other than a lack of hand sanitizers, disinfectant, and face masks.

"When I go out, I wear glasses, face mask, and gloves, and stay about 2 meters from everyone," he said, noting that the wearing of a face mask alone is not enough to rule out the risk of contagion, something that the World Health Organization has publicized.

"I am fairly convinced that today, if face masks were available, most people would wear them when they go shopping for groceries, but the main problem is we just do not have them," he explained.

Since the novel coronavirus outbreak emerged in February, the Italian government announced a smaller-scale lockdown on Feb 21, that covered 11 municipalities in Lombardy, but as the situation escalated, a national quarantine was imposed on March 9.

"I think it is the only truly effective measure, everything else is either too slow, such as developing a cure or a vaccine, or does not impact the spread of the disease because mere social distancing without a lockdown won't be enough," said Cologna, who fears 40 percent of the Italian population may still have failed to grasp the severity of the COVID-19 disease that the virus causes.

"There are still too many people about, although it really depends on the region," he said. "Those communities which have been hit hardest tend to be more aware and tend to abide by the rules."

He said the smaller increases in novel coronavirus cases seen recently suggest the lockdown is working.

"We just need to hunker down and be patient," he added.

"We have, unfortunately, a lot more deaths, because, among the hardest-hit communities, there were small towns with a very high percentage of the population who are over 80," Cologna said. "It's an interesting experience. It's a challenge for a free and open society, but I am confident that we will get through this."

He said some nations have not restricted movement enough, or have done so too slowly.

"We also had a hard time believing our Chinese friends at the end of January, when they said: be wise, be ready, start preparing for real. Our politicians also hesitated at first, but it was a mistake.

"Act now, act decisively, keep everyone at home, enforce a total lockdown. Safety will come at a huge cost for the economy, but a huge loss of life would be so much worse."