Thousands of protesters took to the streets of Berlin chanting "We are free people" as they complained about Germany's social distancing measures.

The demonstrations come amid increasing concern about an upturn in coronavirus infections in Germany.

Protesters marched from the landmark Brandenburg Gate through central Berlin before holding a rally on a wide boulevard. Police then broke up the rally, saying that the organizers were unable to ensure that safety and health regulations were being observed.

The police said on Twitter that over 17,000 attended the protest. A criminal complaint against the organizers for failing to comply with the regulation was later filed.

Many protesters wore no masks and disregarded social distancing rules. Some yelled at people who wore masks, telling them to remove them. There were placards reading "Stop corona insanity," while some protesters wore T-shirts with "Corona=fake news" printed on the front.

Some even danced and sang "We are free people" to the tune of rock band Queen's "We Will Rock You." 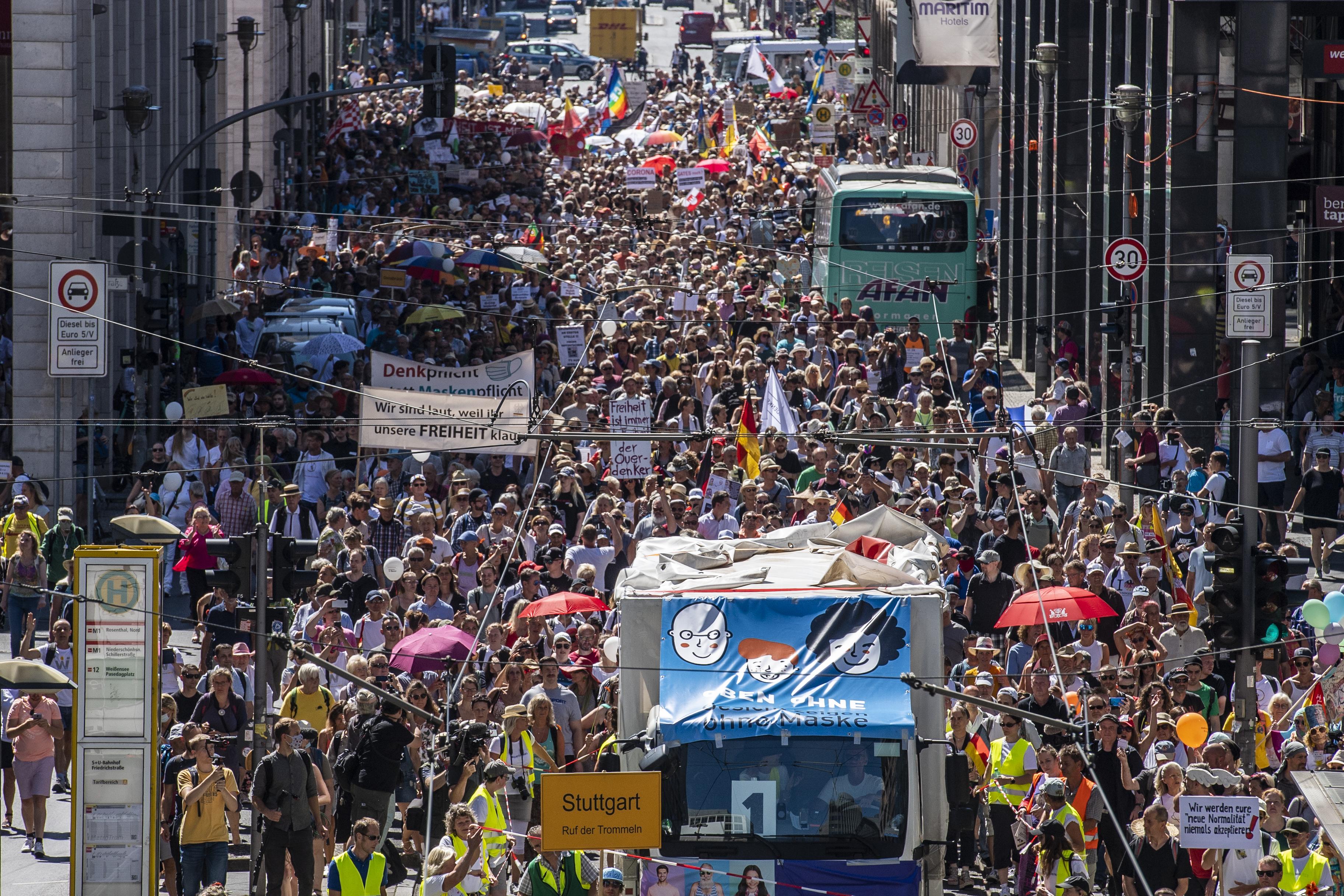 The protest, called the "Day of Freedom," was supported by some neo-Nazi groups and conspiracy theorists, along with Germans who say they are fed up with the government's restrictions to curb the pandemic.

Germany enforced a strict lockdown in mid-March and started to ease it from the end of April. However, large public gatherings are still banned and mask-wearing is compulsory in all shops and on public transport.

In Stuttgart, the same group has repeatedly demonstrated against the restrictions imposed by the government to contain the coronavirus.

"Yes, demonstrations should be allowed even amid the pandemic. But not like this," Spahn tweeted, adding that social distancing, health and safety rules and wearing face masks serve to protect everyone.

Saskia Esken, co-leader of the ruling Social Democratic Party, wrote on Twitter that "Thousands of #Covidiots are creating a second wave in Berlin, without distancing or masks."

A total of 955 new infections have been confirmed in the past 24 hours in Germany, the highest in months, according to the Robert Koch Institute (RKI), the German government agency and research institute responsible for disease control and prevention.

However, protests are still permitted, with authorities urging participants to be cautious.

In Germany, people are now required to quarantine for two weeks upon returning from high-risk areas unless they can present a negative coronavirus test taken within 48 hours, or have a test at the airport.

(With input from Xinhua News Agency.)