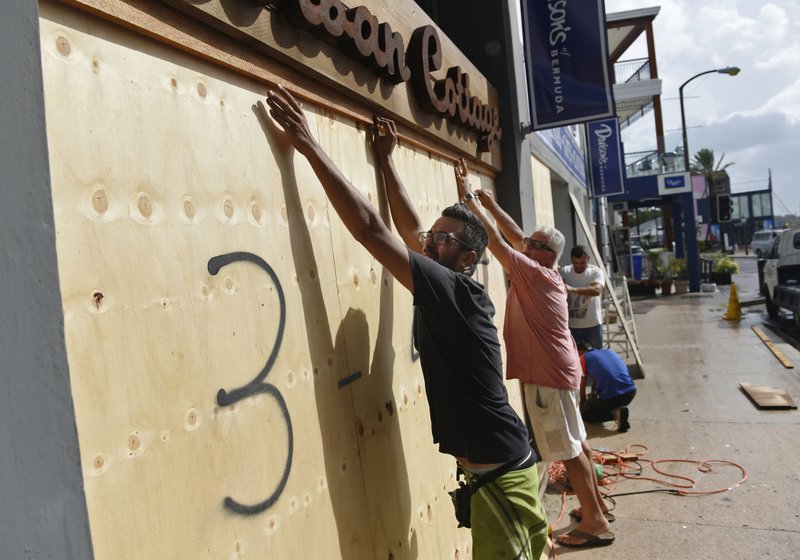 Powerful winds from Hurricane Humberto began hitting Bermuda on Wednesday as the government urged people to stay off the streets during the British territory's close brush with the powerful Category 3 storm. And another growing storm threatened tourist resorts along Mexico's Pacific.

The U.S. National Hurricane Center said hurricane-force winds began to hit the island of some 70,000 people by late afternoon and would probably last into early Thursday.

James Dodgson, director of the Bermuda Weather Service, said the storm was projected to pass about 80 miles (130 kilometers) to the north of Bermuda during the night and could produce tornadoes and dangerous storm surge.

"Humberto's a big hurricane and we're looking at the conditions already deteriorating. There's some very strong winds kicking in, particularly this evening," he said.

Caines said non-emergency medical services would be closed until Thursday. Evening flights from the U.S. and Great Britain were canceled.

"We'd like to ask all of Bermuda to prepare for the storm, to know that the government and everyone is rooting for us, and we can get through this," Caines said. "We've been through this before."

Humberto's maximum sustained winds had strengthened to 120 mph (195 kph) and the storm was centered about 100 miles (160 kilometers) west-northwest of Bermuda in late afternoon. It was moving east-northeast at 20 mph (31 kph).

Forecasters said Lorena was expected to "pass very close" to the coast somewhere between the port of Manzanillo and Puerto Vallarta on Wednesday night and Thursday, while growing toward hurricane force. The still-uncertain long-term forecast track showed it approaching the Los Cabos resorts by Saturday.

Maximum sustained winds were 70 mph (110 kph) as of late afternoon, with higher gusts. It was centered about 75 miles (125 kilometers) south of Manzanillo and was moving northwest at 13 mph (20 kph).

Hurricane warnings were in effect from Punta San Telmo to Cabo Corrientes.

Heavy rains were spreading onshore along the coast, the Hurricane Center said. Mexican officials voiced concern that some parts of southern Mexico, which have seen a lack of rainfall, could now get torrential rains and floods from the combined effects of Lorena and two other weather systems.

In parts of Colima, Jalisco and Michoacan states, "due to the combination of these three atmospheric phenomena, it is forecast that the total accumulations of rain could ... represent 40% of the rain for an entire year in that part of the country," said Blanca Jiménez Cisneros, director-general of Mexico's National Water Commission.

Classes were suspended in Colima as a precaution.

In Texas, the remnants of Tropical Storm Imelda had already drenched parts of Southeast Texas with more than 12 inches (30.5 centimeters) of rain, but officials in the Houston region said that so far there had been no severe problems. It was the first named storm to hit that area since Hurricane Harvey's much heavier rains flooded more than 150,000 homes around the city and caused an estimated $125 billion in damage in Texas.

Tropical Storm Jerry also formed Wednesday morning far out in the Atlantic and was forecast to become a hurricane as it nears the outermost Caribbean islands Thursday night or Friday.