WORLD Besieged IS militants refuse to surrender, ask for an exit

Besieged IS militants refuse to surrender, ask for an exit 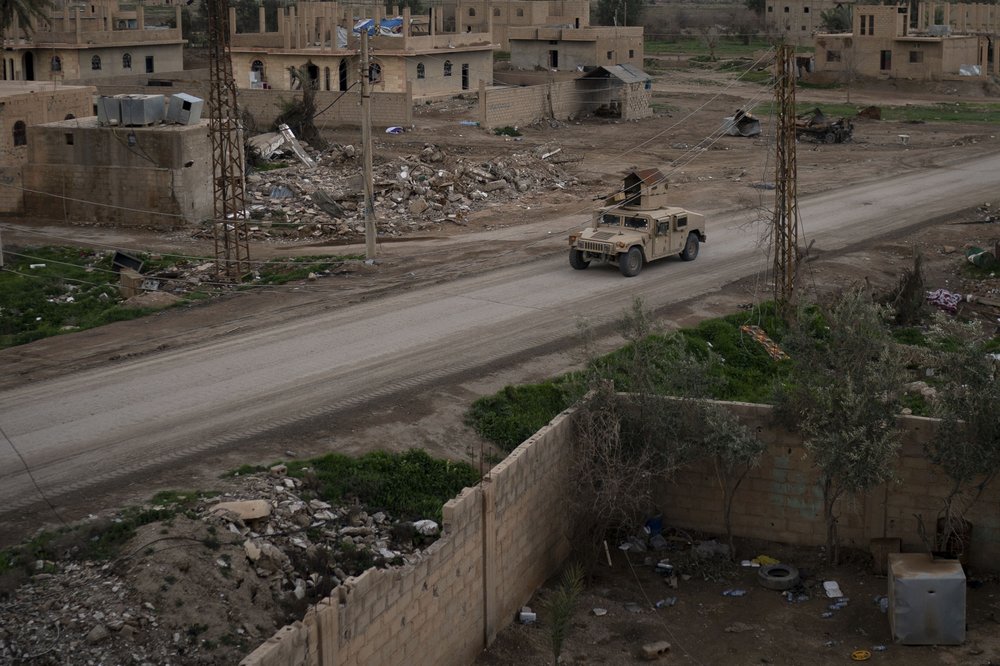 A Humvee drives in a village recently retaken from Islamic State militants by U.S.-backed Syrian Democratic Forces (SDF) near Baghouz, Syria, Sunday, Feb. 17, 2019. Islamic State militants are preventing more than 1,000 civilians from leaving a tiny area still held by the extremist group in a village in eastern Syria, a spokesman for the U.S.-backed Syrian militia fighting the group said Sunday. (Photo: AP)

More than 300 Islamic State militants surrounded in a tiny area in eastern Syria are refusing to surrender to U.S.-backed forces and are trying to negotiate an exit, Syrian activists and a person close to the negotiations said Monday.

The extremists are bottled up in the village of Baghouz, where they are hiding among hundreds of civilians and preventing them from leaving. The stalling tactics are likely to further delay a declaration of the end of the IS group’s self-proclaimed caliphate, which the U.S.-backed Syrian Democratic Forces were hoping to make last week.

A person familiar with the negotiations said the militants are asking for a corridor to the rebel-held northwestern province of Idlib, and demand that they be allowed to leave along with the evacuated civilians. He spoke on condition of anonymity because he was not authorized to speak about the talks, which he described as taking place indirectly.

The Britain-based Syrian Observatory for Human Rights, an activist group that monitors the civil war in Syria, said another request by IS to be evacuated to neighboring Iraq was also rejected. IS released 10 SDF fighters it had been holding on Sunday, but it was not clear what, if anything, the extremists would get in return, the Observatory said.

The speck of land in Syria’s remote eastern desert, near the border with Iraq, is all that remains of a self-styled caliphate that once sprawled across a third of both countries and included several major towns and cities.

In that tiny patch on the banks of the Euphrates River, the militants are holed up in what SDF officials describe as a small tented village atop a network of tunnels and caves. There are civilians inside as well, possibly including hostages.

The SDF and the U.S.-led coalition have been fighting IS in the surrounding region since September. In recent years, they and other forces have steadily driven IS from nearly all the territory it once controlled, in battles that have killed tens of thousands of people and left entire towns and neighborhoods in ruins.

The DeirEzzor 24, an activist collective in eastern Syria, said several trucks loaded with food entered IS-held areas in Baghouz on Monday. It also reported the release of the SDF fighters, without saying whether there was a quid pro quo.

DeirEzzor 24 said the truce reached last week has been extended for five more days as of Sunday. It added that in return several trucks loaded with food entered the IS-held area on Sunday.

At least 62 people have died in recent weeks, mainly from exhaustion and malnutrition, after making their way out of militant-held territory, the International Rescue Committee said. Spokesman Paul Donohoe said two-thirds were children under the age of one. He said they either died along the way or soon after arriving at a camp for the displaced.

Over 30,000 people who left the last IS-held areas have arrived at the al-Hol camp in Syria’s northern Hassakeh province in the last few weeks, raising the overall population of the camp to almost 42,000.

The Observatory said the blasts in the Qusour neighborhood during rush hour Monday killed 17 people and wounded about 50. The Edlib Media Center, an activist collective, said the bombings killed 13 and wounded dozens.

The first blast occurred in the early afternoon and another followed seconds later. The opposition’s Syrian Civil Defense, a group of volunteer first responders, said one of its members was wounded.

The city of Idlib is controlled by al-Qaida-linked militants, who have wide influence in northern Syria.

The city has been hit with bombings in recent months that killed or wounded scores of people.