WORLD Besieged US hospitals grappling with shortage of medical workers

Besieged US hospitals grappling with shortage of medical workers 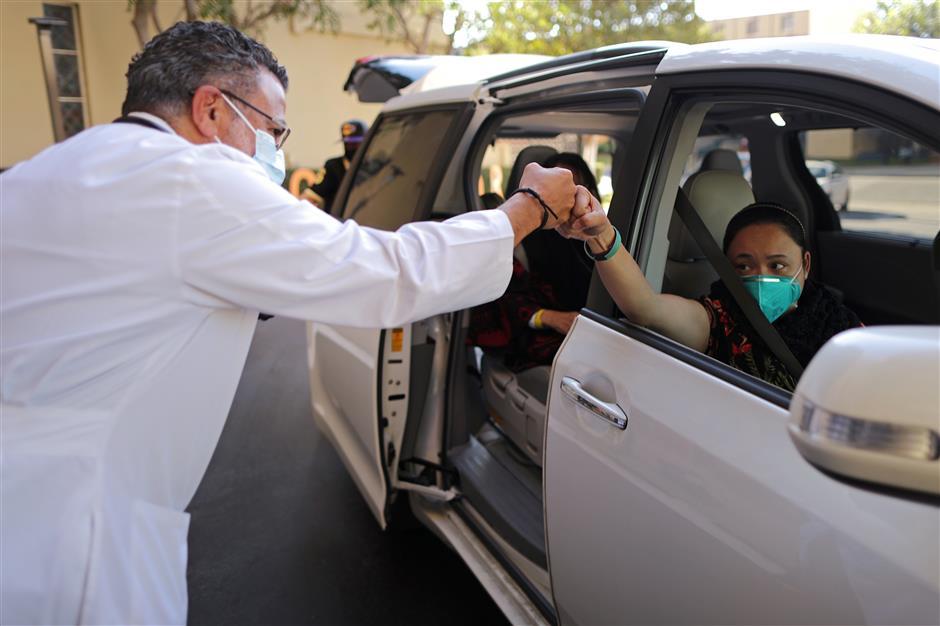 Doctor Maged Tanios fist bumps Shantell Pambuan, 33, daughter of nurse Merlin Pambuan, 66, after Merlin Pambuan walked out of the hospital where she spent 8 months with the COVID-1 at St Mary Medical Center in state California, US on Tuesday. (Photo: AP)

With so many states seeing a flood of coronavirus patients, United States hospitals are again worried about finding enough medical workers to meet demand just as infections from the holiday season threaten to add to the burden on American health care.

California, which is enduring by far its worst spike in cases and hospitalizations, is reaching out to places to fill the need for 3,000 temporary medical workers, particularly nurses trained in critical care.

“We’re now in a situation where we have surges all across the country, so nobody has many nurses to spare,” said Dr Janet Coffman, a professor of public policy at the University of California in San Francisco.

Hospitals in some states have enlisted retired nurses and students.

In Alabama, more than 120 students and faculty members from the University of Alabama at Birmingham’s nursing school began helping last week at UAB Hospital.

“I know our biggest concern is staff, even more concerned about that than physical beds and physical ICU units,” North Carolina Governor Roy Cooper said on Tuesday.

Elected leaders and health officials across the US are asking people to stay home for the holidays while also trying to show the public that the COVID-19 vaccines trickling out to health care workers and nursing home residents are safe.

A day after getting vaccinated on live television, US President-elect Joe Biden said that he has full confidence in the vaccine.

The medical staff shortages are happening as some states report a record number of deaths.

Both Mississippi and West Virginia surpassed their previous highs for virus deaths reported in a single day on Tuesday while Arizona saw its second-highest daily increase during the pandemic.

South Carolina Governor Henry McMaster tested positive for the virus and was to receive outpatient antibody treatment for “mild symptoms,” his office said on Tuesday.

In Tennessee, which is seeing the nation’s worst new COVID-19 infection surge per capita, the state health commissioner has warned that combining the Thanksgiving surge with another would “completely break our hospitals.”

Deaths in Florida’s nursing homes doubled during the Thanksgiving holiday. The rise drew concern from advocates also worried about gatherings over Christmas and other year-end celebrations.

Much of California has exhausted its usual ability to staff intensive care beds.

All of Southern California and the 12-county San Joaquin Valley to the north have been out of regular ICU capacity for days.

An emergency room physician in Los Angeles who helped set up a surge hospital last spring said there are no plans to reopen it.