Beto O'Rourke says nothing in his past will hinder 2020 run

MADISON, Wis. (AP) — Democratic presidential candidate Beto O'Rourke told supporters Sunday that he's never taken LSD and there's "nothing" he hasn't already revealed about his past that could come back to hurt his run for office. 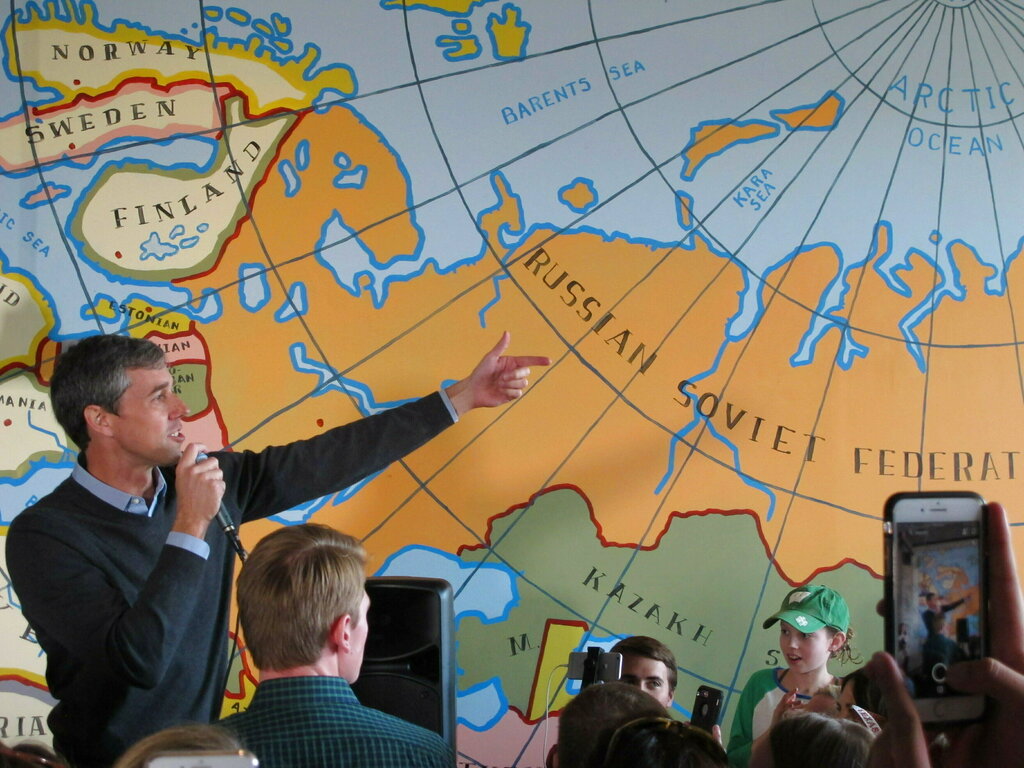 The former Texas congressman — who has become known for his propensity for using the "f-word" — also promised again to clean up his language, despite breaking such past vows.

O'Rourke grabbed much attention as he wrapped up his first week of campaigning, but his challengers could be found at events from the Upper Midwest to the South. And looming over them all is the shadow of one prominent Democrat not in but not out, former Vice President Joe Biden. He has yet to announce a decision.

Speaking in front of a large map of Russia inside a coffee shop in Wisconsin's capital, O'Rourke promised to return often, addressing concerns Democrats raised in 2016 after Hillary Clinton never campaigned in the state after her party's primary and lost the state to Donald Trump by fewer than 23,000 votes.

"This state is fundamental to any prospect we have of electing a Democrat to the presidency in 2020," O'Rourke said, adding that he was "really glad" Milwaukee was chosen to host the 2020 Democratic national convention. The city, which O'Rourke was visiting later Sunday, beat out Miami and Houston.

O'Rourke, of course, has to secure the Democratic presidential nomination before he can worry about the general election. But then he's also already said he'd prefer to pick a woman as his running mate, should he make it that far. O'Rourke said Sunday that it was presumptuous to commit to that so early, but that doing so would make a "tremendous amount of sense" given the number of qualified women candidates.

Many remember the Texan for declaring "I'm so f--king proud of you guys" on national television during his concession speech in November, after narrowly losing his Senate race to incumbent Republican Ted Cruz. O'Rourke said Sunday that he'll not use profanities any more, after being asked by a voter if he was going to "clean up his act," especially in front of children.

"Point taken, and very strongly made," O'Rourke said. "We're going to keep it clean." He made a similar pledge during his race with Cruz, then didn't make good.

O'Rourke has previously admitted to a 1998 arrest for drunken driving and said nothing else will come out that could be used against him during the 2020 presidential campaign. Later, he signed the skateboard of a supporter who asked if he had ever taken the drug LSD. The candidate responded that he hadn't.

About 400 people came to the coffee shop to hear O'Rourke. Half made it inside and half listened from the sidewalk through the opened door. O'Rourke wore a St. Patrick's Day necklace featuring green cabbage but said he had coffee — not beer — with his breakfast: "Although it can be justified as an O'Rourke on St. Patrick's Day to do that," he joked, in a nod to his Irish heritage.

The Republican Party's official Twitter accounted noted his past arrest, tweeting, "On this St. Paddy's Day, a special message from noted Irishman Robert Francis O'Rourke" and including an altered photo of the Democrat's mug shot wearing an oversized, green leprechaun hat over the phrase "Please Drink Responsibly."

Other highlights of Sunday's campaigning:

Democratic presidential candidate Elizabeth Warren said during a campaign stop in Tennessee that her proposed tax on "ultra-millionaires" is a key step in reducing corruption and privileges for the rich, while making the economy work better for poorer people.

An energetic Warren spoke a racially-mixed group of about 400 potential voters while standing on a podium in front of the American and Tennessee flags in a large room at Douglass High School in Memphis, Tennessee, on Sunday afternoon. It was her first stop in a three-state tour of the South.

Warren is the first of a crowded field of Democratic presidential candidates to visit the Deep South in the run-up to the 2020 election. She is scheduled to visit the Mississippi cities of Cleveland and Greenville before a CNN town hall in Jackson on Monday. Selma and Birmingham in Alabama are on the agenda Tuesday.

Warren touted her tax on whose households with a net worth of $50 million or more. Warren said the tax revenue, estimated at $2.75 trillion over a ten-year period. could help in reducing the cost of housing, health care and child care.

"It is an America that is working great for those at the top and not working for anyone else, and that's why I'm in this fight," Warren said. She reminded the crowd that she is running a grassroots campaign that does not accept corporate donations.

Kirsten Gillibrand formally joined the 2020 White House race on Sunday and previewed the hard line she will take against President Donald Trump by announcing a rally outside one of his signature Manhattan properties.

The New York senator had spent more than a month traveling around the country to gauge support for a run. Gillibrand's announcement that she was joining the dozen-plus Democratic candidates seeking the White House came in a nearly three-minute video released early Sunday, when she says the national anthem poses this question: "Will brave win?"

She said her debut speech as a candidate will come this coming Sunday in front of the Trump International Hotel & Tower in New York.

Democratic presidential candidate Amy Klobuchar says an exchange with a tearful Vietnam veteran who lost his son to mental illness is "a moment I'm never going to forget, no matter where I go in Iowa."

The Minnesota senator spoke to voters Sunday at a Davenport, Iowa restaurant. It was the final stop of a two-day swing through the state.

The man, who was sitting toward the front of the room wearing a Vietnam Veterans hat, began crying as Klobuchar spoke about her respect for Sen. John McCain, who died last year. The Republican was a prisoner of war during Vietnam.

Klobuchar approached the man after her speech to take a photo. She stood with a hand on his back for several minutes as he recounted losing his son and told her he fears the U.S. may get into more wars.

Afterward, Klobuchar told reporters the moment "brings up again the importance of mental health centers." She says mental health care has been one of the biggest concerns she's heard from voters.

The South Bend, Indiana, mayor said says he's received contributions from 65,000-plus individual donors. That's key because the Democratic National Committee said last month up to 20 candidates can qualify for debates in June and July by collecting donations from at least 65,000 individuals, with at least 200 unique donors in at least 20 states.

In an email to supporters, Buttigieg said "we weren't even close" to 65,000 donors when the DNC originally announced the requirement. The 37-year-old veteran says more than 76,000 people have now donated.

He also told "Fox News Sunday" that "all of the signs are pointing in the right direction" to shift from just exploring a 2020 run to becoming an official candidate, as Gillibrand did Sunday.

New York Mayor Bill de Blasio criticized former President Barack Obama during a small gathering in New Hampshire as he mulls a run for president, saying that Obama's early days in office were "a lost window."

Minutes later, in front of a larger audience, de Blasio praised the Affordable Care Act, Obama's signature legislative achievement, calling it "progress." Obama pursued the health care legislation during his first two years in office and has been criticized at times for focusing on health care instead of the struggling economy.

A handful of people were present in a second-floor private room of a Concord restaurant when de Blasio compared Obama to President Franklin D. Roosevelt, who took office in 1933 amid the Depression and immediately began a series of actions that came to define the modern presidency's focus on a 100-day agenda. The mayor said Roosevelt was the only person who "had a greater head of steam and political momentum and capital coming into office."

"He, to his great credit, did the 100 days and the reckless abandon and understood that you had to achieve for people to build the next stage of capital to use for the next thing," de Blasio said. "Obama, I think, nobly went at health care, but it played out over such a long time and it got treated politically as such a narrow instead of universal item, tragically, that it was a lost window. And I'm not saying anything I don't think a lot of people feel."