A defiant President Joe Biden rejected blame for chaotic scenes of Afghans clinging to U.S. military planes in Kabul in a desperate bid to flee their home country after the Taliban's easy victory over an Afghan military that America and NATO allies had spent two decades trying to build. 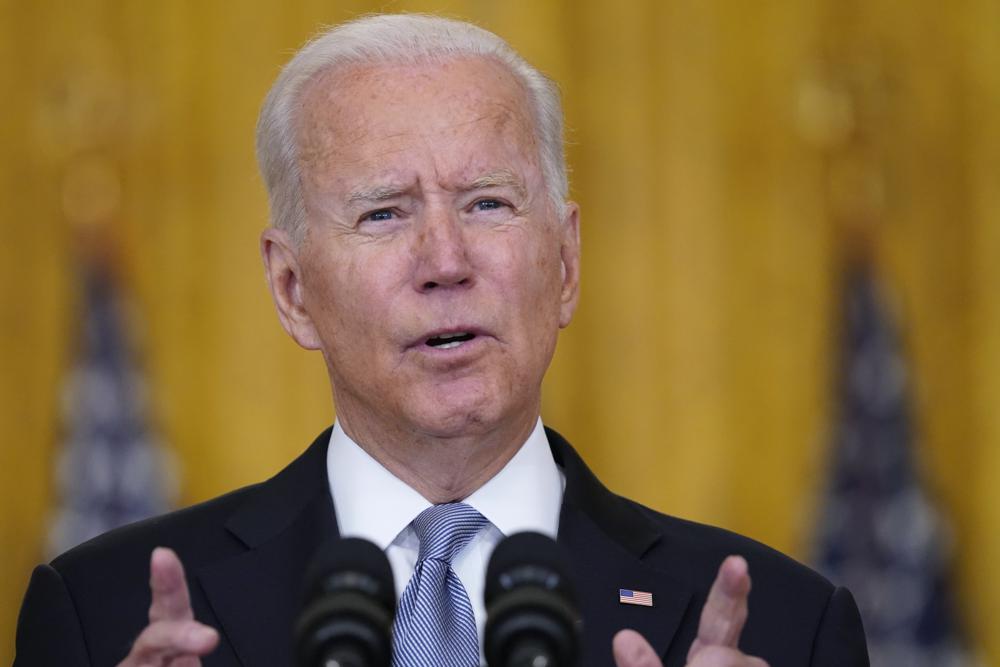 President Joe Biden speaks about Afghanistan from the East Room of the White House, Monday, Aug. 16, 2021, in Washington. (Photo: AP)

At the White House, Biden on Monday called the anguish of trapped Afghan civilians "gut-wrenching" and conceded the Taliban had achieved a much faster takeover of the country than his administration had expected. The U.S. rushed in troops to protect its own evacuating diplomats and others at the Kabul airport.

But the president expressed no second thoughts about his decision to stick by the U.S. commitment, formulated during the Trump administration, to end America's longest war, no matter what.

"I stand squarely behind my decision" to finally withdraw U.S. combat forces, Biden said, while acknowledging the Afghan collapse played out far more quickly than the most pessimistic public forecasts of his administration. "This did unfold more quickly than we anticipated," he said.

Despite declaring "the buck stops with me," Biden placed almost all blame on Afghans for the shockingly rapid Taliban conquest.

His grim comments were his first in person to the world since the biggest foreign policy crisis of his still-young presidency. Emboldened by the U.S. withdrawal, Taliban fighters swept across the country last week and captured the capital, Kabul, on Sunday, sending U.S.-backed Afghan President Ashraf Ghani fleeing the country.

Biden said he had warned Ghani — who was appointed Afghanistan's president in a U.S.-negotiated agreement — to be prepared to fight a civil war with the Taliban after U.S. forces left. "They failed to do any of that," he said.

Internationally, the spectacle of the Taliban takeover and the chaos of the evacuation effort was raising doubts about America's commitments to its allies.

German Chancellor Angela Merkel said it was "bitter" to watch the complete collapse in a war that Germany and other NATO partners had followed the U.S. into after the Sept. 11 attacks, which were plotted from Afghanistan. The humiliating scenes seemed certain to give comfort to American foes.

At home, it all sparked sharp criticism, even from members of Biden's own political party, who implored the White House to do more to rescue fleeing Afghans, especially those who had aided the two-decade American military effort.

"We didn't need to be seeing the scenes that we're seeing at Kabul airport with our Afghan friends climbing aboard C-17s," said Rep. Jason Crow, a Colorado Democrat and Iraq and Afghanistan military veteran.

He said that is why he and others called for the evacuations to start months ago. "It could have been done deliberately and methodically," Crow said. "And we think that that was a missed opportunity."

Besides the life-and-death situation in Kabul, the timing of the crisis was unfortunate for Biden's domestic efforts at home. It could well weaken his political standing as he works to combat the COVID-19 pandemic and build congressional support for a $1.2 trillion infrastructure bill and an even larger expansion of the social safety net.

Still, the focus at home and abroad on Monday was on Kabul's airport, where thousands of Afghans trapped by the sudden Taliban takeover rushed the tarmac and clung to U.S. military planes deployed to fly out staffers of the U.S. Embassy, which shut down Sunday, and others.

At least seven people died in the chaos, including two who clung to the wheels of a C-17 and plunged to the tarmac as it flew away, and two others shot by U.S. forces. Americans said the men were armed but there was no evidence that they were Taliban.

With tens of thousands of U.S. citizens and others as well as Afghans desperate to escape, Biden insisted the U.S. had done all it could to plan.

In fact, Afghan leaders had asked the U.S. not to publicly play up any advance efforts to evacuate former military translators, female activists and others most at risk from the Taliban, saying that in itself could trigger what the Afghans said could be "a crisis of confidence," Biden said.

Pentagon spokesman John Kirby said late Monday that the U.S., which had taken charge of air traffic control at the Kabul airport, had resumed airlifts out after suspending them due to the morning's stampedes onto the runways by frightened Afghans.

Kirby said U.S. forces are planning to wrap up their oversight of the evacuation by Aug. 31, also the date Biden has set for officially ending the U.S. combat role in Afghanistan.

The U.S. hopes to fly out up to 5,000 people a day once more of 6,000 U.S troops being deployed to secure the evacuation arrive, and once more transport planes can land, he said.

Biden pledged to work to also evacuate private U.S. citizens and citizens of foreign governments, as well as Afghans who formerly worked with Americans in the country, journalists, prominent women and other Afghans considered most at-risk of Taliban reprisal.

As of July, the U.S. had a visa application backlog of 18,000 former Afghan employees alone who were seeking a haven in the United States, and had been able to evacuate only a few thousand in what was meant to be a sped-up process over the last month.

Veterans groups and nonprofit groups that worked with Afghan women appealed to Biden on Monday to keep troops at the Kabul airport at least through the end of the month, to keep the escape route out of Taliban hands.