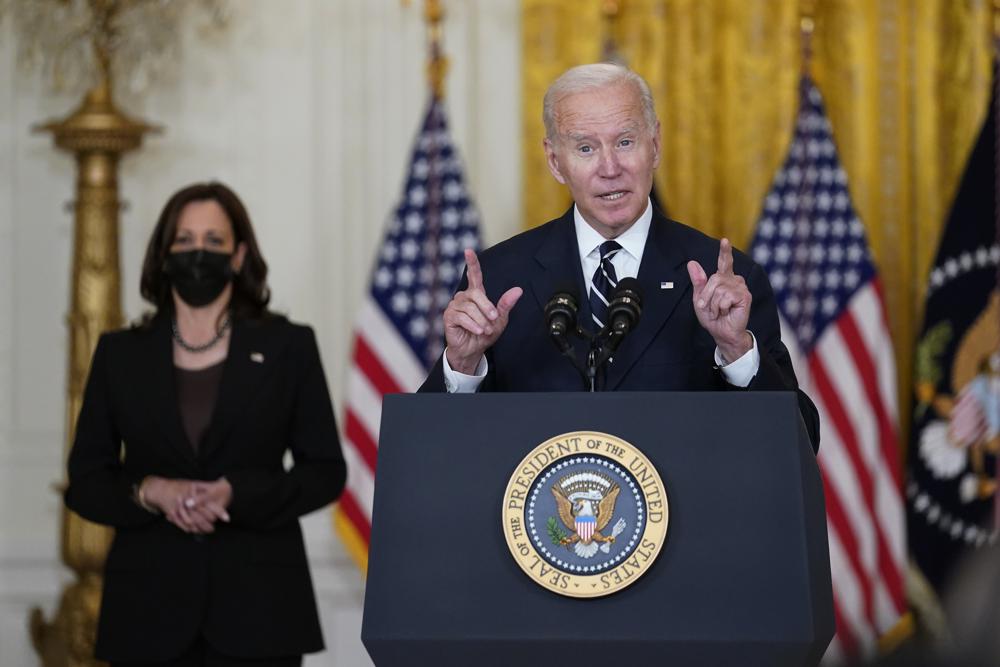 President Joe Biden speaks about his domestic agenda from the East Room of the White House in Washington, Thursday, Oct. 28, 2021, as Vice President Kamala Harris looks on. (AP Photo/Susan Walsh)

President Joe Biden declared Thursday he had reached a “historic” framework with Democrats in Congress on his sweeping domestic policy package, but he was still struggling for critical final support from skeptical colleagues for the hard-fought and dramatically scaled-back bill.

Eager to have a deal in hand before his afternoon departure for global summits, Biden made his case privately on Capitol Hill to House Democrats and publicly in a speech at the White House. He’s now pressing for a still-robust package — $1.75 trillion of social services and climate change programs — that the White House believes can pass the 50-50 Senate.

He departed for Europe with Democrats closer to a deal but battles remaining as they press to finish up the final draft in the days and weeks ahead.

“It will fundamentally change the lives of millions of people for the better,” Biden said about the package, which he badly wanted before the summits to show the world American democracy still works.

“Let’s get this done,” he exhorted.

Together with a nearly $1 trillion bipartisan infrastructure bill, Biden claimed the infusion of federal investments would be a domestic achievement modeled on those of Franklin Roosevelt and Lyndon Johnson.

“I need your votes,” Biden told the lawmakers at the Capitol, according to a person who requested anonymity to discuss the private remarks.

But final votes will not be called for some time. The revised package has lost some top priorities, frustrating many lawmakers as the president’s ambitions make way for the political realities of the narrowly divided Congress.

Paid family leave and efforts to lower prescription drug pricing are now gone entirely from the package, drawing outrage from some lawmakers and advocates.

Still in the mix, a long list of other priorities: Free prekindergarten for all youngsters, expanded health care programs — including the launch of a new $35 billion hearing aid benefit for people with Medicare — and $555 billion to tackle climate change.

There’s also a one-year extension of a child care tax credit that was put in place during the COVID-19 rescue and new child care subsidies. An additional $100 billion to bolster the immigration and border processing system could boost the overall package to $1.85 trillion if it clears Senate rules.

One pivotal Democratic holdout, Sen. Kyrsten Sinema of Arizona, said, “I look forward to getting this done.”

However, another, Joe Manchin of West Virginia, was less committal: “This is all in the hands of the House right now.”

The two Democrats have almost single-handedly reduced the size and scope of their party’s big vision.

Republicans remain overwhelmingly opposed, forcing Biden to rely on the Democrats’ narrow majority in Congress with no votes to spare in the Senate and few in the House.

Taking form after months of negotiations, Biden’s emerging bill would still be among the most sweeping of its kind in a generation, modeled on New Deal and Great Society programs. The White House calls it the largest-ever investment in climate change and the biggest improvement to the nation’s healthcare system in more than a decade.

In his meeting with lawmakers at the Capitol, Biden made clear how important it was to show progress as he headed to the summits.

“We are at an inflection point,” he said. “The rest of the world wonders whether we can function.”

With U.S. elections on the horizon, he said it’s not “hyperbole to say that the House and Senate majorities and my presidency will be determined by what happens in the next week.”