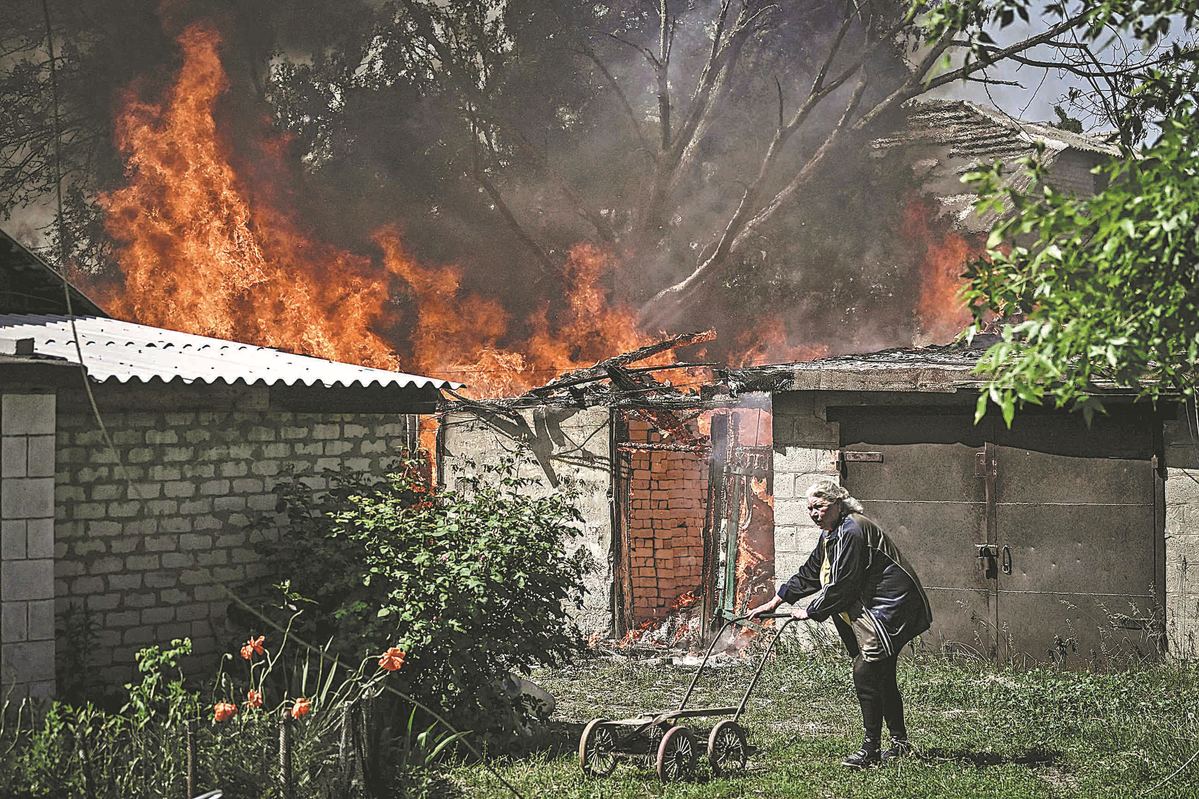 An elderly woman walks away from a burning garage after shelling in the city of Lysytsansk in the eastern Ukrainian region of Donbas on Monday. (Photo: AFP)

US President Joe Biden said he will not send rocket systems to Ukraine that could potentially reach into Russia, after reports that the administration was preparing to send long-range systems to the besieged European nation.

The Washington Post reported that the administration had been mulling providing the Multiple Launch Rocket System, or MLRS, which would allow Ukrainians to fire rockets much farther than they are currently able to.

The MLRS had reportedly been a top request from Ukrainian officials, who say they need it to stop the advance of Russian forces in the east.

"We're not going to send to Ukraine rocket systems" that can reach Russia, Biden told reporters at the White House on Monday, the Reuters news service reported.

The US has provided thousands of portable Stinger anti-aircraft and Javelin anti-tank missiles to Ukrainian forces as well as advanced drones and field artillery.

Russian Foreign Minister Sergey Lavrov last week cautioned Western powers against supplying Ukraine with weapons capable of hitting Russian territory, warning that such a move would be a "serious step toward unacceptable escalation".

Russia's Ambassador to the US Anatoly Antonov reinforced that message, demanding that Washington "not take such a provocative step".

Lavrov was expected to visit Saudi Arabia on Wednesday where he will meet foreign ministers from Gulf Cooperation Council states, two Gulf officials said on Tuesday.

Attention has been focused on Sievierodonetsk, where part of the city is "controlled by the Russian army" and Russian troops are "gradually moving toward downtown", Serhiy Hayday, head of the Lugansk regional military administration, said on Tuesday.

"The city is essentially being destroyed ruthlessly block by block," Mayor Oleksandr Striuk told The Associated Press. He said heavy street fighting continues in the city.

On the other side of the border, officials in the Russian city of Kirov have ordered residents to clear out the basements of their apartment blocks so that they can be used as potential bomb shelters.

On Monday, Turkish President Recep Tayyip Erdogan called his Russian counterpart Vladimir Putin, who told him that Moscow is ready to work with Ankara to free up Ukrainian ports that Russia has blocked during the "special military operation". Erdogan called Zelensky as well later that day, and both leaders "unanimously agree on the need to restore peace".

During an earlier call with the leaders of France and Germany, Putin was asked to release the Ukrainian fighters that had been holed up in the Azovstal steel plant in Mariupol.

Kyiv has said it wants to exchange the soldiers in a prisoner swap, but Moscow has indicated that they will first stand trial.