White House hopeful Joe Biden on Friday leveled fierce criticism at Donald Trump, with his campaign saying the president has resorted to "abhorrent" lies about Democrat Kamala Harris's eligibility to be vice president. 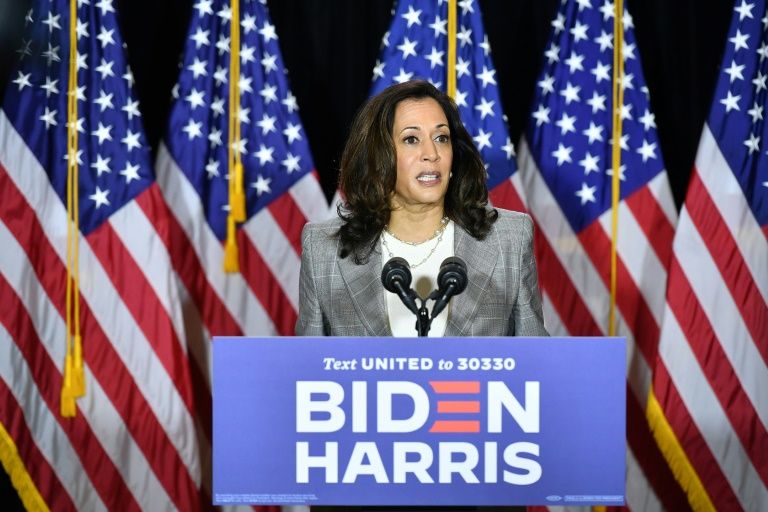 Joe Biden's running mate, Senator Kamala Harris, has faced baseless accusations that she might be ineligible to serve as vice president because her parents were immigrants. (Photo: AFP)

Biden named Harris, a woman of color who was born in the United States and is constitutionally eligible to be both vice president and president, as his running mate on Tuesday. She quickly faced attacks that Democrats deemed racist.

"I heard it today that she doesn't meet the requirements," Trump said Thursday, citing an article by a conservative law professor that questioned the immigration status of Harris's parents at the time of her birth.

Harris, 55, was born in Oakland, California to a mother from India and a father from Jamaica.

Trump "has sought to fuel racism and tear our nation apart," Biden spokesman Andrew Bates said in a statement, referring to the "grotesque, racist birther movement" led by Trump that promoted the lie that Barack Obama, the nation's first black president, was not born in the United States.

"So it's unsurprising, but no less abhorrent, that as Trump makes a fool of himself straining to distract the American people from the horrific toll of his failed coronavirus response that his campaign and their allies would resort to wretched, demonstrably false lies in their pathetic desperation."

The conservative professor's article cited by Trump followed claims shared thousands of times on Facebook that Harris could not become president because her parents hailed from abroad.

Article 2 of the US Constitution states that "no person except a natural born citizen, or a citizen of the United States" shall be eligible for the presidency.

Section 2 of the 14th Amendment says "all persons born or naturalized in the United States" are US citizens.

Trump grudgingly acknowledged late in his 2016 presidential campaign that Obama was American-born.

Since then, Trump has faced accusations of racism, and has embraced other conspiracies.

Polls show him trailing Biden in the November election.