Joe Biden unleashed a stinging critique Wednesday of President Donald Trump's response to the coronavirus, calling on Trump to "wake up" to the havoc caused by the pandemic and do more to prevent further harm. 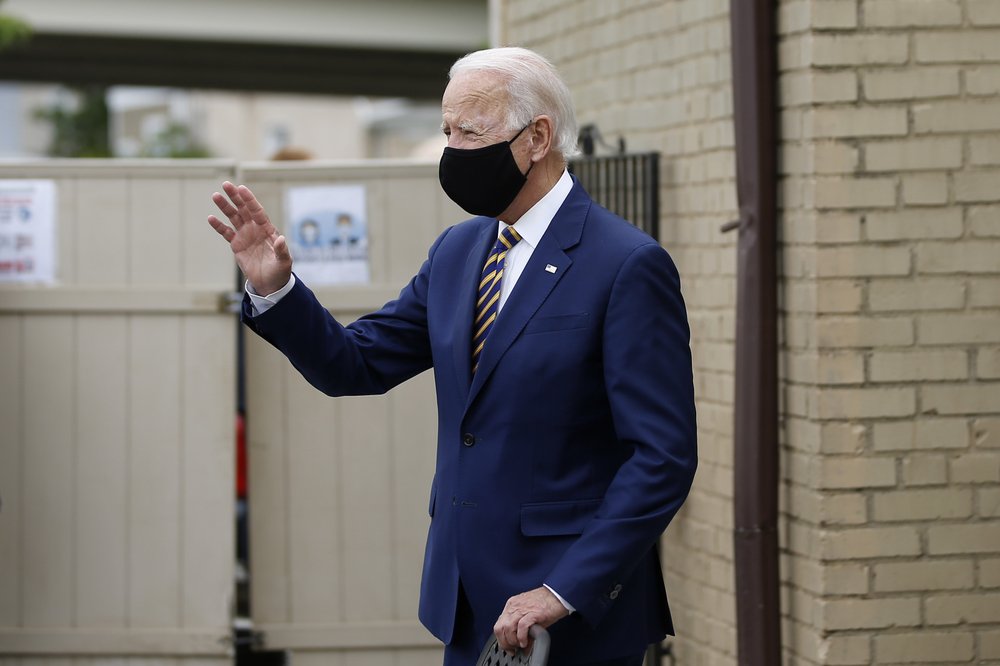 "Donald Trump wants to style himself as a wartime president," the presumptive Democratic presidential nominee said at a recreation center in the Philadelphia suburbs. "Unlike any other wartime leader, he takes no responsibility, he exercises no leadership, now he has just flat surrendered the fight."

Biden has steadily stepped up his attacks on Trump's leadership in recent weeks. But his remarks Wednesday were especially sharp, trying to counter the populism Trump hopes to ride to reelection with stern warnings about how dangerous such an approach would be.

At times pounding his podium for emphasis, Biden said the Republican president wants to declare the pandemic over even as the outbreak continues to kill Americans and disrupt the economy.

"We may lose some of the progress we've begun to make all because he's lost interest," Biden said.

The U.S. has topped 2 million coronavirus infections, and some states are reporting spikes in cases after reopening their economies. A surge has been reported this week in Florida and Arizona, likely political battlegrounds in the November election.

Still, Trump is eager for the country to return to normalcy. He's hoping that the reopening of businesses and other aspects of life will revive the economy — and his reelection prospects. Trump will be in Tulsa, Oklahoma, for his first major campaign rally in months on Saturday despite concerns from local health officials.

Biden is taking a much different course. He's spent much of his time at his Delaware home to prevent the spread of the virus. Most campaign activities, including fundraisers, have moved online, a strategy that probably will continue in the coming weeks.

Biden has announced a virtual fundraiser next week with former President Barack Obama, the first time the two have appeared together in months.

When Biden does make public appearances, they usually are limited to locations in Delaware or nearby Pennsylvania. Those events have included strict rules for wearing masks and practicing social distance.

He hasn't taken questions from reporters since April 2. Beyond Pennsylvania, Biden hasn't visited any of the premier battleground states such as Michigan and Wisconsin since the pandemic struck.

Biden's toned-down campaign style was on display before his Wednesday remarks when he appeared at a nearby soul food restaurant and bar to participate in a socially distanced listening session to hear how the pandemic has affected small businesses.

Sitting 6 feet apart from each other around tables outdoors, local business owners expressed concerns over a lack of guidance from the federal government on reopening.

Scott Richardson, the owner of Occasionally Yours Cafe and catering company in Swarthmore, Pennsylvania, said he cut his workforce from 12 employees to four. He told Biden that he voted for Trump in 2016, but now he says the president is more interested "in day trading" than long-range planning to combat the coronavirus.

Biden told the group that "no one" in the Trump administration "is taking responsibility" during the outbreak.

Biden's campaign has pledged to resume a normal campaign schedule that will take him around the country, but not before authorities and health officials deem it safe. Trump officials have argued that Biden is using the pandemic as an excuse for holding heavily controlled events.

Neither Trump nor Biden engages in many unscripted moments with voters. But Tim Murtaugh, a spokesman for the president's reelection campaign, slammed Biden for preferring "campaigning from the comfort of his basement" rather than "traveling the country meeting voters and making the case for his candidacy."

"These events have been either tightly controlled or covered by press in a pool arrangement," Murtaugh wrote of the former vice president's recent stops. "At what point will Biden subject himself to the scrutiny American voters deserve when considering the next President of the United States?"

Catch up on the 2020 election campaign with AP experts on our weekly politics podcast, "Ground Game."

This story has been corrected to reflect that the last name of the Occasionally Yours Cafe owner is Richardson, not Peterson.