WORLD Biden chides Trump for lack of cooperation on vaccine

Biden chides Trump for lack of cooperation on vaccine

Joe Biden met Thursday with governors from both parties and criticized President Donald Trump’s unprecedented attempt to block the peaceful transition of power, saying it was hindering the flow of information about programs to develop a vitally important coronavirus vaccine. 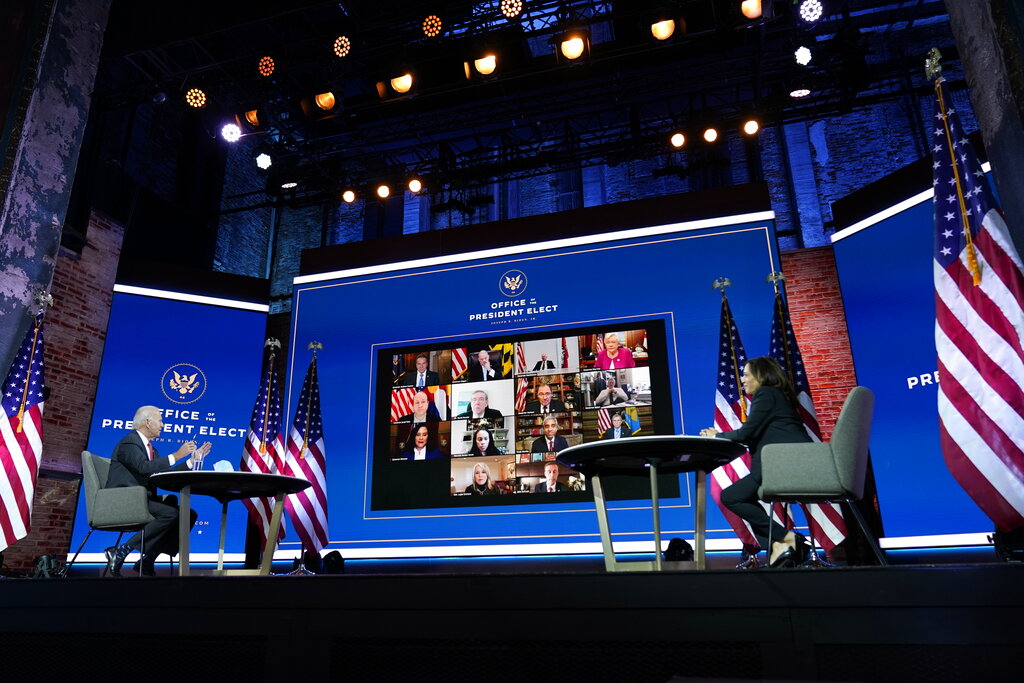 He also said he looked forward to bipartisan cooperation that can bolster efforts to slow the pandemic after he takes office.

The president-elect reiterated his previous pledges not to institute a nationwide shutdown to curb the virus's spread and repeated that more states instituting mask-wearing mandates could save tens of thousands of lives.

“Unfortunately, my administration hasn’t been able to get everything we need,” Biden said during a video conference with the National Governors Association’s leadership team, which consists of five Republicans and four Democrats.

“We haven’t been able to get into Operation Warp Speed, but we will take what we learned today and build it into our plan,” Biden said in remarks after the meeting, which included Republicans Larry Hogan of Maryland, Asa Hutchinson of Arkansas, Kay Ivey of Alabama, Charlie Baker of Massachusetts and Gary Herbert of Utah.

Afterward, Biden spoke about distribution of a vaccine once one is ready, saying, “There has to be a prioritization.”

“That’s why I’d like to know exactly what this administration has in mind in terms of their Operation Warp Speed and how they plan it,” he said of the Trump White House. “And that’s what we talked about with the governors today. They all mentioned the need to focus on the communities that have been left behind.”

Biden participated from a theater in Wilmington, Delaware, with Vice President-elect Kamala Harris. Also appearing online were the leaders from his virus task force.

He also took questions from reporters and revealed he'd decided on a treasury secretary nomination for his new administration. Biden refused to provide more details, except to say it was a choice that would satisfy Democrats from across the political spectrum — presumably including outspoken progressives who worried Biden might go for a safer, more moderate selection.

Among the Democrats on Thursday's videoconference was Gretchen Whitmer of Michigan, which has been among the states Trump has targeted for unfounded claims of voter fraud. Biden told those participating that the virus doesn't care about political divisions.

“There’s a real desire for real partnership between the states and the federal government,” Biden said.

The president-elect also promised state leaders he would “make sure you get the resources you need ... to beat this virus” and said he would frequently hold similar meetings with governors going forward.

Biden vowed to forgo a national shutdown “because every region, every area, every community can be different,” saying that imposing a countrywide mandate would be “counterproductive."

Instead, Biden noted that 10 governors had imposed statewide mask mandates to combat the virus, calling it a “patriotic duty.” He's previously vowed to ask all governors to impose such rules and go around holdouts to local and county officials to cover as much of the U.S. as possible.

Ivey told participants that both parties in Congress need to come together to provide more coronavirus response funding, according to a readout provided by her office. It made no mention of the Alabama governor recognizing Biden as president-elect.

Hogan, by contrast, told The Associated Press recently that Trump’s wild and unsupported claims of widespread voter fraud were “dangerous” and “embarrassing.”

“As I said on the day that the president-elect was declared the winner, his election has provided a mandate for cooperation,” Hogan said after the videoconference with Biden. "We look forward to working closely with the Biden-Harris administration as we continue to face this unprecedented global pandemic.”

Trump, meanwhile, came out Thursday with a new round of false claims of voter fraud in key states — even as courts continue to reject his challenges.

Beyond being a pillar of democracy, the orderly transfer of power after an election is especially critical this year given the extraordinary governing challenges Biden will inherit in just nine weeks. The pandemic is the nation's worst public health crisis in a century, state and local governments are facing massive budget shortfalls and millions of Americans remain out of work.

Hutchison said over the weekend that Biden would be the next president. He also called on the Trump administration to give Biden access to the intelligence briefings he needs to be fully prepared to lead the country on Jan. 20, Inauguration Day.

Still, more than two weeks after the Nov. 3 election, the Trump administration is refusing to let Biden receive detailed briefings on national security and pandemic planning.

With Trump dug in and Republicans on Capitol Hill largely unwilling to challenge him, Biden has been forced to turn to a diverse collection of outside allies to ratchet up the pressure on Trump to concede.

The CEOs of America's largest companies have released a statement recognizing Biden and Harris as the clear winners. The heads of the American Hospital Association, the American Medical Association and the American Nurses Association issued a joint statement on Tuesday urging the Trump administration to share “all critical information related to COVID-19” with Biden. Not doing so, they warned, would jeopardize American lives.

Trump, meanwhile, has been getting nowhere in the courts, and his scattershot effort to overturn Biden’s victory is shifting toward obscure election boards that certify the vote. The battle is centered in the states that sealed Biden’s win. In Michigan, two Republican election officials in the state’s largest county initially refused to certify results despite no evidence of fraud.

The officials then backtracked and voted to certify before flipping again on Wednesday and saying they “remain opposed to certification.”

"Incredibly damaging messages are being sent to the rest of the world about how democracy functions,” Biden said, adding that Trump's actions in Michigan were particularly troubling.

“What the president’s doing now is going to be another incident where he will go down in history as being one of the most irresponsible presidents," the president-elect said.