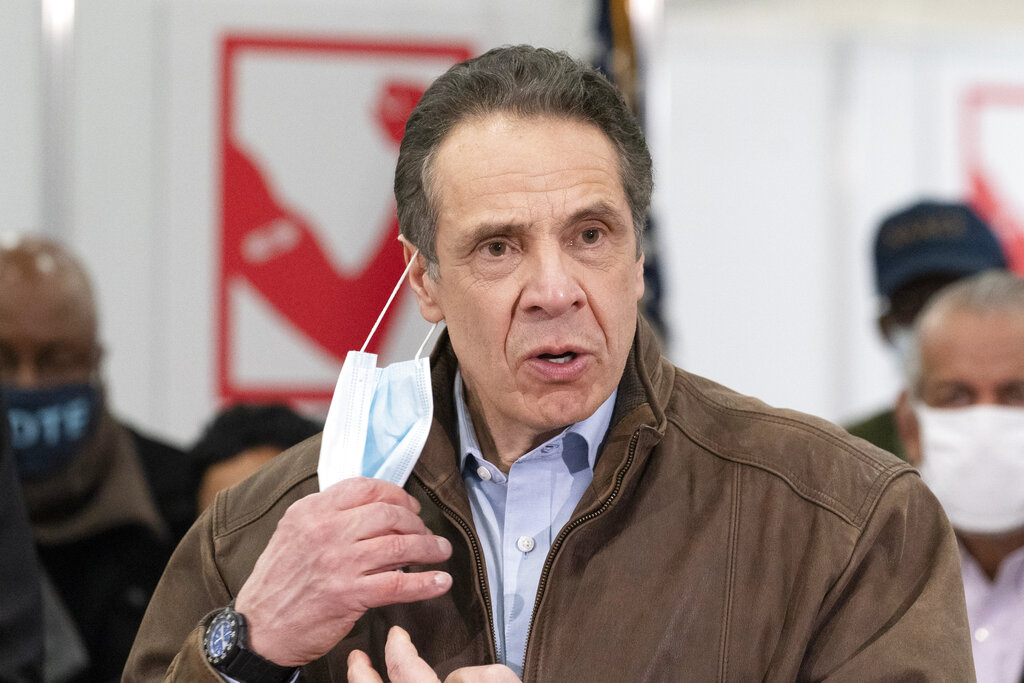 New York Gov. Andrew Cuomo removes his mask during a visit to a COVID-19 vaccination site, Monday, March 15, 2021, at the State University of New York in Old Westbury. The site is scheduled to open on Friday. (Photo: AP)

Biden made the remarks in an interview with ABC News that is scheduled to air Wednesday morning. When asked by anchor George Stephanopoulos if the investigation confirms the claims of the women, should Cuomo resign, Biden said “yes," adding, “I think he'd probably end up being prosecuted, too."

“It takes a lot of courage to come forward so the presumption is it should be taken seriously," Biden said. “And it should be investigated, and that’s what’s underway now.”

Cuomo is facing allegations that he sexually harassed or behaved inappropriately toward multiple women, including several former staffers. The former staffers have accused Cuomo of workplace harassment, including demeaning them with pet nicknames or making objectifying remarks about their appearance, subjecting them to unwanted kisses and touches or asking them about their sex lives.

Cuomo also faces an allegation that he groped a female staff member under her shirt after summoning her to the governor’s mansion in Albany late last year. He has denied touching any women inappropriately.

The three-term governor has rejected calls for his resignation from fellow Democrats, including New York’s two U.S. senators, Chuck Schumer and Kirsten Gillibrand, and has asked New Yorkers to await the results of an investigation headed by state Attorney General Letitia James.

James last week named a former federal prosecutor, Joon Kim, and employment discrimination attorney Anne Clark to lead the Cuomo investigation. They have full subpoena power and will document their findings in a public report.

The sexual harassment investigation is in addition to scrutiny that Cuomo is facing from federal prosecutors who are looking into how his administration handled data on COVID-19 outbreaks at nursing homes.