WORLD Biden defends handling of withdrawal from Afghanistan, sees 'no question' of US credibility

Biden defends handling of withdrawal from Afghanistan, sees 'no question' of US credibility 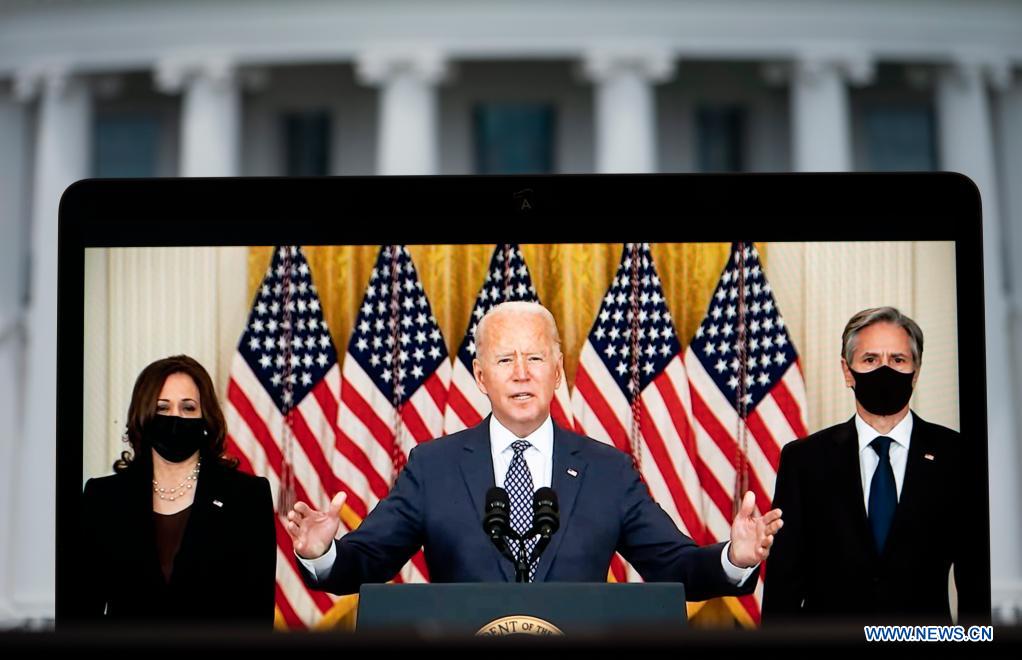 "This is one of the largest, most difficult air lifts in history, and the only country in the world capable of projecting this much power on the far side of the world with this degree of precision is the United States of America," said Biden, who has been widely criticized on the botched pullout, in a televised speech from the White House.

Biden said he has "seen no question of our credibility from our allies around the world."

"And all our allies have agreed with that ... every one of them knew and agreed with the decision I made to end - jointly end - our involvement in Afghanistan," said Biden with Vice President Kamala Harris, Secretary of State Antony Blinken, Secretary of Defense Lloyd Austin and National Security Adviser Jake Sullivan standing behind him.

"Let's put this thing in perspective here. What interest do we have in Afghanistan at this point with al Qaeda gone? We went to Afghanistan for the express purpose of getting rid of al Qaeda in Afghanistan as well as getting Osama bin Laden, and we did," Biden said.

Calling the past week "heartbreaking," Biden said the United States has made "significant progress" and evacuated from Afghanistan over 18,000 people since July and 13,000 since Aug. 14.

He pledged to use the full force of the U.S. military to complete the withdrawal and bring Americans and their Afghan allies who assisted the United States in the 20-year conflict to safety.

Nearly 6,000 troops are on the ground, providing runway security, and standing guard around the airport to assist civilian departure, said Biden, acknowledging the evacuation mission is "dangerous."

"We will get you home. Make no mistake, this evacuation mission is dangerous and involves risks to our armed forces. And it's being conducted under difficult circumstances. I cannot promise what the final outcome will be," he said.

This is Biden's second press conference at the White House since the Taliban took control of the Afghan capital of Kabul last weekend.

The world was shocked to see scenes of chaotic evacuation at the Kabul airport.

In his speech on Monday, Biden said Kabul's fall to the Taliban came much sooner than Washington had anticipated.

While saying he bears responsibility for the unfolding crisis in Afghanistan, Biden has also cast blame on top Afghan leaders, Afghan forces and his predecessor Donald Trump.

In an interview with ABC News on Wednesday, Biden said he believed the withdrawal could not have been executed without chaos ensuing and he was open to extending the Aug. 31 deadline for a total withdrawal from Afghanistan.

The Taliban took over Afghanistan just two weeks before the United States was planning to complete its withdrawal of troops from the war-torn country.