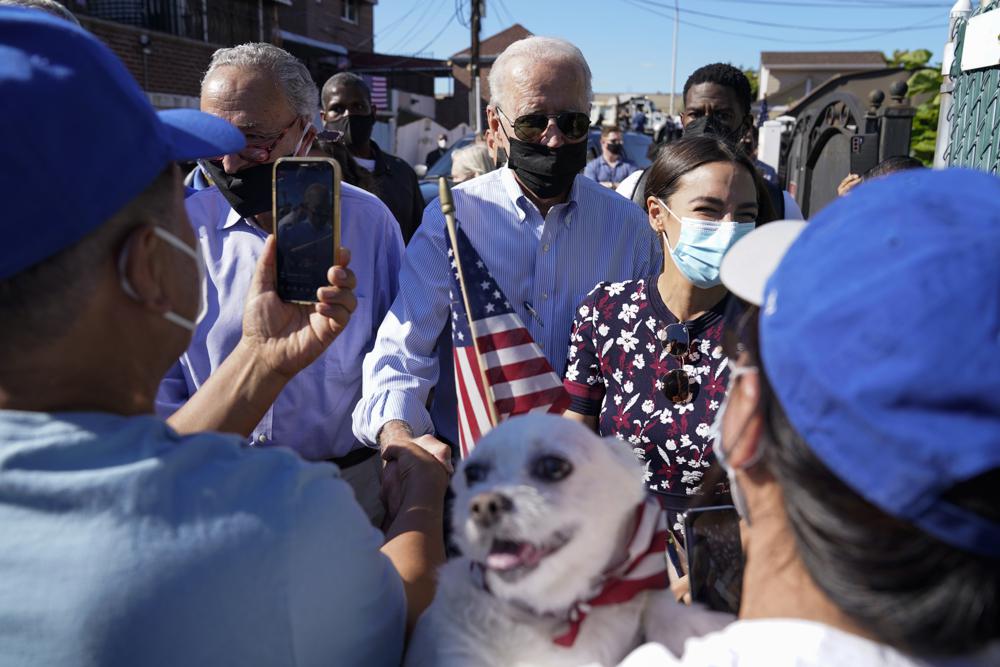 President Joe Biden talks with people as he tours a neighborhood impacted by flooding from the remnants of Hurricane Ida, Tuesday, Sept. 7, 2021, in the Queens borough of New York, with Senate Majority Leader Chuck Schumer of N.Y., and Rep. Alexandria Ocasio-Cortez, D-N.Y. (Photo: AP)

"We must seize this opportunity to build a big, bold pathway to critical careers, for a diverse generation of Americans ready to take on this existential crisis that we face,'' said Ali Zaidi, deputy White House climate adviser. "It's national service meets family-supporting careers meets the moment.''

The effort comes as the White House and many Democrats are intensifying their focus on climate change after a series of devastating storms recently battered much of the nation. Touring neighborhoods in New York and New Jersey this week that were devastated by flooding from the remnants of Hurricane Ida, Biden said climate change has become "everybody's crisis."

"The threat is here. It is not getting any better," Biden said. "The question is can it get worse?"

The proposed climate corps was not included in a bipartisan infrastructure bill approved by the Senate, but it is a key part of an emerging $3.5 trillion package backed by Democrats to help families and address climate change. A vote in the House on both bills could occur by the end of the month.

Rep. Joe Neguse, a Colorado Democrat who has co-sponsored a climate corps bill, said it's important to train the next generation of U.S. land managers, park rangers and other stewards of our natural resources.

"This bold investment is a necessary response to the climate crisis and prioritizes the maintenance and upkeep of public lands,'' he said.

While the jobs should pay at least $15 an hour, those likely to join the climate corps "are not doing it for the compensation,'' Neguse said. "They know it's important to connect to nature and do important work for their state and the nation.''

Details are still being worked out, but Neguse and other Democrats say the program should pay "a living wage'' while offering health care coverage and support for child care, housing, transportation and education.

David Popp, a professor of public administration at Syracuse University, said a key distinction between the original Civilian Conservation Corps and the new climate contingent is that the U.S. economy is not in a depression — great or otherwise — as it was during Franklin D. Roosevelt's presidency.

While U.S. employers added just 235,000 jobs in August, the unemployment rate decreased slightly to 5.2% as the economy continues to recover from the coronavirus pandemic.

Most of those being targeted for the new climate corps "could find employment elsewhere,'' Popp said, noting a proliferation of help-wanted signs at retail businesses across the nation.

"I don't know that an unemployed coal worker in West Virginia is going to move to Montana to take a minimum-wage job to restore streams,'' he said.

On the other hand, some of his own students are highly motivated by the climate crisis and may want to spend a year or two on an outdoor job that helps address an existential threat to the planet, Popp said.

Republicans largely dismiss the climate corps as a do-gooder proposal that would waste money and could even take away jobs from workers displaced by the pandemic and the push for so-called green jobs.

"My grandfather worked for the CCC, and I remember him telling me how terrible it was, how backbreaking the work was," said Arkansas Rep. Bruce Westerman, the top Republican on the House Natural Resources Committee.

"We don't need another FDR program, and the idea that this is going to help land management is a false idea as well," Westerman said.

At a committee meeting last week, Rep. Cliff Bentz, R-Ore., called the proposed climate corps "delusional,'' adding: "Why would we think people are going to suddenly jump at doing really, really hard, dirty, dangerous work because we offer them $15 an hour? That's not going to happen."

In a widely circulated piece, the conservative Wall Street Journal editorial page said Democrats want to "expand government into every corner of American life. It isn't enough to lecture Americans about the supposed perils of climate change. Now they also want to tax you and other Americans to pay your children to spend years lecturing you.''

The program will help communities recover from climate disasters such as Hurricane Ida and Western wildfires while creating "good-paying jobs that can turn into clean-economy careers,'' Markey said. In the process, the climate corps will "make the country a safer, healthier place that can compete in the global economy,'' he added.

The urgency of the climate crisis "recalls past chapters of national mobilization,'' Neguse said. "In standing up the Civilian Climate Corps, we will build on that legacy and existing infrastructure to meet the challenges of today."