KABUL, March 29 (Xinhua) -- US President Joe Biden has mulled over extending the May 1 deadline set last year by his predecessor Donald Trump with the Taliban for withdrawal of all US troops from Afghanistan. 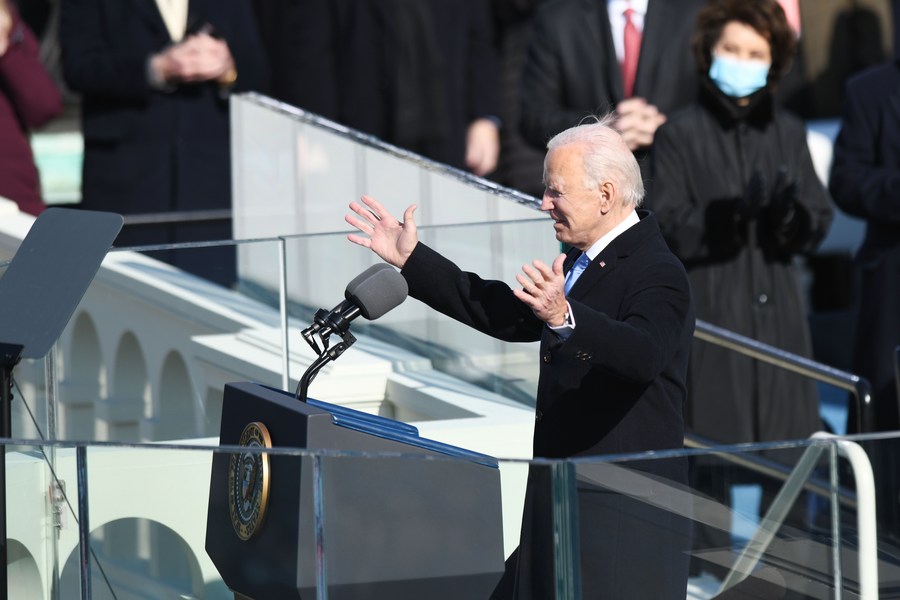 Joe Biden delivers his inaugural address after he was sworn in as the 46th US president in Washington, D.C., the United States, on Jan. 20, 2021. (Photo: Xinhua)

"It's going to be hard to meet the May 1 deadline" to pull out all troops, Biden told his first press conference on Thursday since he took office, while noting that he "can't picture" the troops still being there next year.

It was the administration's first direct answer to the withdrawal issue, yet without offering a precise timetable as to when the United States would end its military presence in the war-torn country.

US IN MILITARY QUAGMIRE

Biden's remarks came four days after US Secretary of Defense Lloyd Austin met with Afghan President Mohammad Ashraf Ghani in Kabul, after which he told reporters that the United States wants to see "a responsible end" to its longest war.

The deadline is part of the agreement the Trump administration signed with the Taliban in Doha last February. The Taliban still controls about half of Afghanistan after fighting against the NATO-led coalition forces and government troops in the Afghan War, which has lasted for nearly 20 years since the terrorist attacks of Sept. 11, 2001.

Under the deal, all US and foreign troops are set to withdraw from Afghanistan. In return, the Taliban promised to prevent al-Qaeda and other terrorist groups from using Afghan territory to threaten the United States and its allies.

As Biden wrestles with the troop withdrawal decision, the Taliban has warned of dire consequences if the United States fails to pull out as scheduled.

The Taliban tweeted Friday that the "Doha agreement is the shortest way to end the war in Afghanistan. If America fails to fulfill the agreement, the Islamic Emirate (name of the ousted Taliban regime) will be compelled to defend its religion and homeland."

The United States appeared to be pushing forward stalled peace talks between the two parties in a bid to leave the country sooner, though the Afghan government requires a US military presence to deter the Taliban, according to experts.

Earlier this month, US Secretary of State Antony Blinken wrote to Ghani, proposing a U.N.-led peace conference in Turkey.

Washington may be able to pressure the two parties into a peace agreement this year, yet it will remain insubstantial for ending the conflict, considering the Afghan government and the Taliban remain far apart on a number of issues, said Zhu Yongbiao, director of the Research Center for Afghanistan at China's Lanzhou University.

With regard to the US proposal of forming a transitional government, President Ghani reiterated that a general election was the only way forward for the transfer of power in the Asian country.

A Taliban leader told media this month that the Taliban would not join a transitional government.

"The Taliban have no intention of negotiating with the government at all," said Afghan political analyst Atiqullah Amarkhil, noting that the group urged US troops to leave but will not forgo their own military strength in dealing with the Afghan government.

Both Afghan analysts and senior US officers believe that the Afghan government needs strong support from the United States.

US Army General Richard Clarke, chief of US Special Operations Command, told the US Senate on Thursday that should US troops leave, Afghan government forces could be overrun by the Taliban, a situation that experts fear may create room for Jihadists.

The United States repeatedly hesitated about when to withdraw due to a persisting concern that the Taliban did not have the will or the ability to truly cut ties with al-Qaeda in a way stipulated in the Doha deal, said Zhu.

Therefore, it is not surprising that the Biden administration is likely to extend the troop withdrawal deadline, he noted.

Meanwhile, "the United States is in favor of maintaining intelligence and military presence in Afghanistan" to safeguard its interests in this region," said Amarkhil.