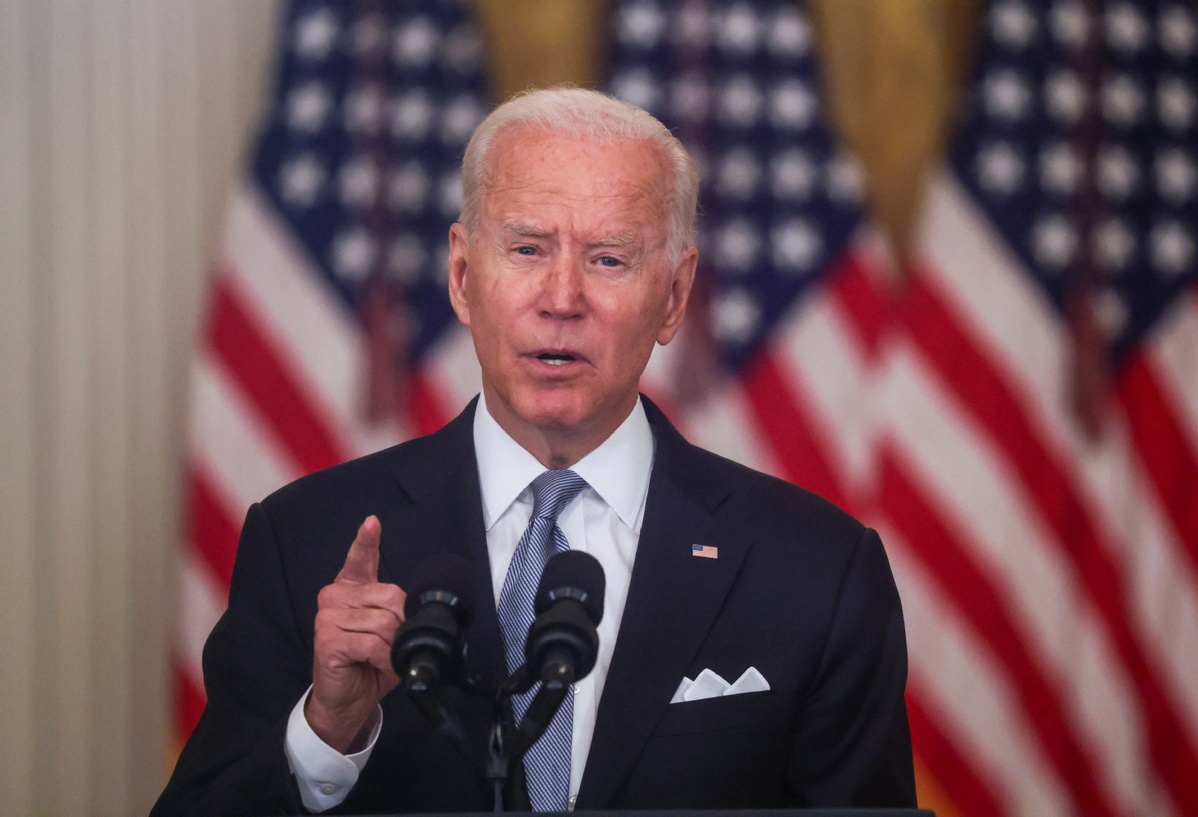 US President Joe Biden delivers remarks on the crisis in Afghanistan during a speech in the East Room at the White House in Washington on August 16, 2021. (Photo: Agencies)

US President Joe Biden made a forceful defense on Monday of the United States' troop withdrawal from Afghanistan, saying that US soldiers should not be fighting in a war in which Afghans themselves won't engage wholeheartedly. But that didn't wash with many critics of an exit that brought an ignominious end to the 20-year engagement.

The president's words came after images of the chaos at Kabul's airport were beamed around the world, with desperate Afghans trying to latch on to US military planes as the Taliban took control of the country. Several who resorted to that action fell to their death.

"The truth is, this did unfold more quickly than we had anticipated," Biden said. "Afghanistan political leaders gave up and fled the country. The Afghan military collapsed, sometimes without trying to fight.

"If anything, the developments of the past week reinforced that ending US military involvement in Afghanistan now was the right decision."

But on Capitol Hill, at least one member of the president's party was troubled by the implications of what he saw.

"We didn't need to be in this position; we didn't need to be seeing these scenes at Kabul airport with our Afghan friends climbing a C-17," Representative Jason Crow, a Colorado Democrat and former Army Ranger who served in Afghanistan, told The New York Times.

Biden, in defense of his accelerated withdrawal of US troops, said the original mission of counterterrorism had morphed into nation-building and counterinsurgency.

Biden said that when he took office in January, he inherited a deal that his predecessor Donald Trump had negotiated with the Taliban for US forces to pull out by May 1, 2021.

Trump, who traded accusations on Afghanistan with Biden on Saturday, said on Monday: "It's not that we left Afghanistan. It's the grossly incompetent way we left!"

Senate Minority Leader Mitch McConnell, a Republican, called the desperate scenes in the Afghan capital "the embarrassment of a superpower laid low".

Policy experts expressed divergent views on the fallout of the US withdrawal.

Richard N. Haass, president of the Council on Foreign Relations, wrote that the "hasty and poorly planned "withdrawal may not provide sufficient time to evacuate Afghans who worked with the US and Afghan governments.

"Beyond the local consequences, the grim aftermath of America's strategic and moral failure will reinforce questions about US reliability among friends and foes far and wide," he wrote on the council's website.

Anthony Cordesman, strategy chair at the Center for Strategic and International Studies, said that Biden "made a strong case－that no matter how long we stayed, we couldn't achieve the objective of somehow creating an effective government and democracy".

Ted Galen Carpenter, a senior fellow for defense and foreign policy studies at the Cato Institute, noted that being an advocate of US military interventions "apparently means never having to say you're sorry, no matter how obvious and severe the blunders".

"But continuing to risk the lives of US troops and pour billions of taxpayer dollars down the drain for decades to come in the forlorn hope that we can transform Afghanistan into a viable Western-style democracy is neither a realistic nor a moral option," Carpenter wrote in an article titled Why Afghanistan Abruptly Collapsed.

"Vietnam and Afghanistan (along with Iraq, Libya, Syria, and several other countries) are places in which US meddling has made matters worse rather than better."

Justin Logan, also a senior fellow at the Cato Institute, notes that US policy in Afghanistan and the government's message to citizens about it have been built on lies and delusions. "The American people, having happily swallowed those lies, are now aghast," he wrote on Monday.

Adam Brandon, president of FreedomWorks, a conservative group, said: "President Biden is not alone in bearing blame for the events unfolding in Afghanistan. The senior military and intelligence officials, who for years gave an inaccurate picture of the realities on the ground to Congress, must also be held responsible."

But Aaron David Miller, a senior fellow at the Carnegie Endowment for International Peace, said: "The only thing he (Biden) seemed to concede in terms of his responsibility was the fact that they had underestimated the speed at which the Taliban took territory and ultimately took Kabul."

In a webinar hosted by Code Pink on Monday, Zaher Wahab, an Afghan-American scholar, said: "We have to ask the question: Why did the Afghan military fail, given all the training, the technology, the expenses? ... It shows the failure of the American intelligence, the American military, the American policy, and the American diplomacy.

"First, it (the US) should never have attacked Afghanistan. It was illegitimate, illegal, immoral, inhuman. When it did, it should have left as soon as the Taliban had been dislodged. ... Why it stayed, we know, because it's called imperialism by a different name."