WASHINGTON, July 16 (Xinhua) -- US President Joe Biden and visiting German Chancellor Angela Merkel on Thursday came out of a meeting at the White House, without a deal on their dispute over the Nord Stream 2 gas pipeline project, as widely expected. 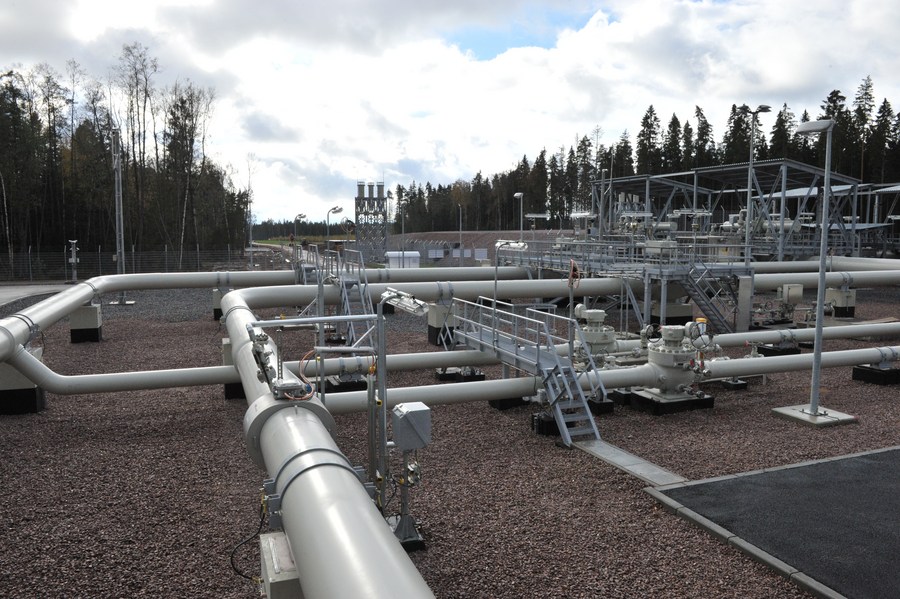 Picture taken on Oct. 8, 2012 shows Nord Stream pipeline equipments before the opening ceremony of the North Stream second gas link in Portovaya bay, some 60 kilometers from the town of Vyborg in northwestern Russia. (File Photo: Xinhua)

"I reiterated my concerns about Nord Stream 2," Biden told reporters at a joint press conference after the meeting. But he added they agreed that "Russia must not be allowed to use energy as a weapon to coerce or threaten its neighbors."

The 1,230-km gas pipeline, which is expected to be completed next month, would bring natural gas from Russia to Germany through the Baltic Sea. Washington has long maintained that the pipeline endangers energy security.

The United States and Germany have different assessments regarding the Nord Stream 2, Merkel said at the conference, while stressing both agreed that Ukraine will remain a transit country for natural gas.

As a part of the waiver, Germany and the United States must reach an agreement on the pipeline over the next three months.

Merkel is the first European leader to visit the White House since Biden took office. The visit is widely seen as Biden's efforts to restore the relationship between Washington and Berlin, which had been damaged by his predecessor Donald Trump.

Trump constantly blasted NATO allies for what he said was taking advantage of US willingness to foot the bill for Europe's defense for decades.

At times Trump dressed down European leaders in public, accusing them of not paying their fair share of defense costs. In 2019, Trump singled out Germany for failing to meet the 2-percent NATO military expenditure benchmark.

In sharp contrast, Biden sees European allies as vital to pursuing his foreign policy and in meeting challenges from nations Washington views as competitors.

"The cooperation between the United States and Germany is strong, and we hope to continue that, and I'm confident that we will," Biden said Thursday before the meeting with Merkel.

Biden called Merkel "a great friend, a personal friend, and a friend of the United States."

"I value the friendship," Merkel said at the White House.

William Courtney, a retired US ambassador and now an adjunct senior fellow at US nonprofit global think tank RAND Corporation, told Xinhua that "US-Germany relations are likely to become closer."

"It feels like the US has already conceded on Nord Stream 2 since Biden waived sanctions a few months ago. That was to my mind a mistake," Michael O'Hanlon, a senior fellow at the Brookings Institution, told Xinhua.

"That said, I think Biden will handle the overall relationship well and restore a strong sense of shared purpose," O'Hanlon said. "The real question, of course, as Germans rightly recognize, is what will happen in the US in 2025 and beyond."

US Democrats hold a slim majority in Congress, and it remains unclear what will happen in next year's midterm elections, as well as the 2024 race for the White House.