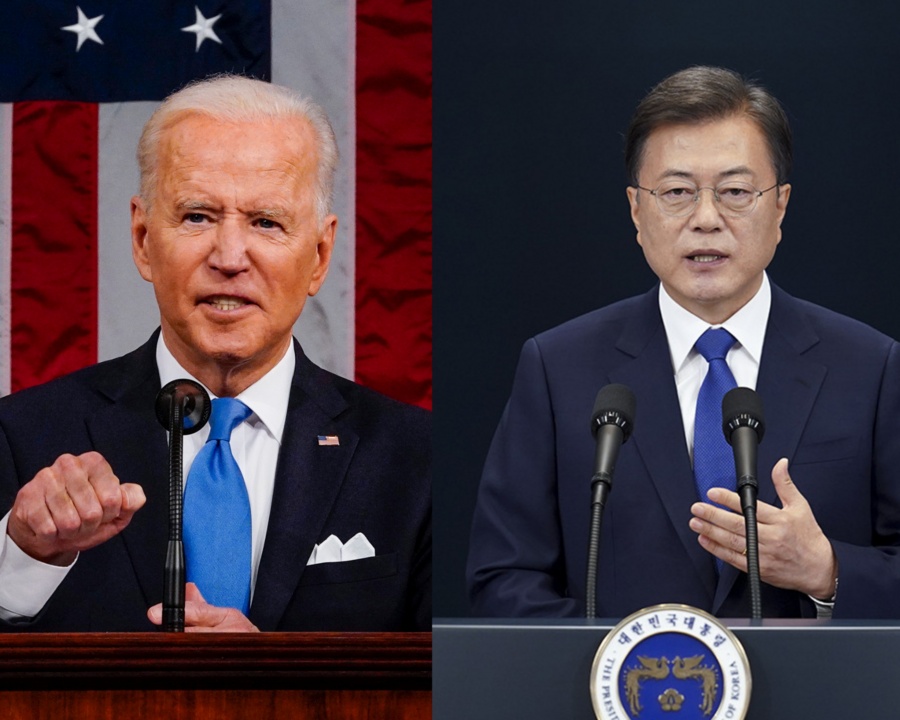 WASHINGTON, May 22 (Xinhua) -- U.S. President Joe Biden met Friday at the White House with South Korean President Moon Jae-in, discussing a range of issues, including the situation on the Korean Peninsula.

Moon is the second leader invited to the White House after Biden took office, after Japanese Prime Minister Yoshihide Suga.

During a joint press conference at the White House following their meeting, Biden said he and Moon discussed the shared approach to the Democratic People's Republic of Korea (DPRK).

"Our two nations also share a willingness to engage diplomatically with the DPRK, to take pragmatic steps that will reduce tensions as we move toward our ultimate goal of denuclearization of the Korean Peninsula," he said.

"We're under no illusions how difficult this is, none whatsoever," Biden told reporters. "And the past four administrations have not achieved the objective. It's an incredibly difficult objective."

Biden announced that career diplomat Sung Kim will serve as the U.S. Special Envoy for the DPRK to drive diplomatic efforts.

Moon, in his remarks, called achieving complete denuclearization and permanent peace on the Korean Peninsula the "most urgent common task" that the two allies must undertake.

He noted that Biden expressed support for the inter-Korean dialogue and cooperation. "Under close cooperation with the U.S., we will work to facilitate progress in inter-Korean relations, so as to achieve a virtuous cycle with U.S.-DPRK dialogue."

Biden did not rule out a meeting with DPRK leader Kim Jong Un, but stressed a precondition of the meeting would be Pyongyang's commitment to discussing its nuclear weapons.

"This meeting is all about setting the stage for the Biden administration's relationship with South Korea," Jenna Gibson, an expert on the Korean Peninsula at the University of Chicago, told Xinhua.

Gibson said that while the DPRK issue is on the priorities list of the Biden administration's agenda, it's not near the top.

"Even setting aside domestic issues like COVID recovery, Biden still has an extremely full plate at the moment," Gibson said. "I don't anticipate him delegating too much energy into actively working on the DPRK nuclear issue at this moment in time."

The DPRK "is one of the administration's foreign policy priorities, but it will likely fall behind efforts to restore the nuclear deal with Iran and climate change. The unanswered question is whether negotiations are a priority for Pyongyang," Stangarone said.

He also raised the issue that Biden might be out of step with Moon on dealing with the DPRK.

"Timing is perhaps the main difference in the approaches of Biden and Moon. Biden is open to making incremental progress, something South Korea is likely to support," said the expert.

"But with only a year left in office, Moon faces more pressure to restart talks" with the DPRK sooner, said the expert, adding "Biden is likely to be more deliberative and wants to see progress on a working level before moving forward."

The Biden administration at the end of April completed its policy review towards the DPRK. The White House said it had reached out to Pyongyang through several channels but had not yet received any response.

Kim Jong Un and former U.S. President Donald Trump held their first summit in Singapore in June 2018, agreeing on a complete denuclearization of and a lasting peace settlement on the Korean Peninsula.