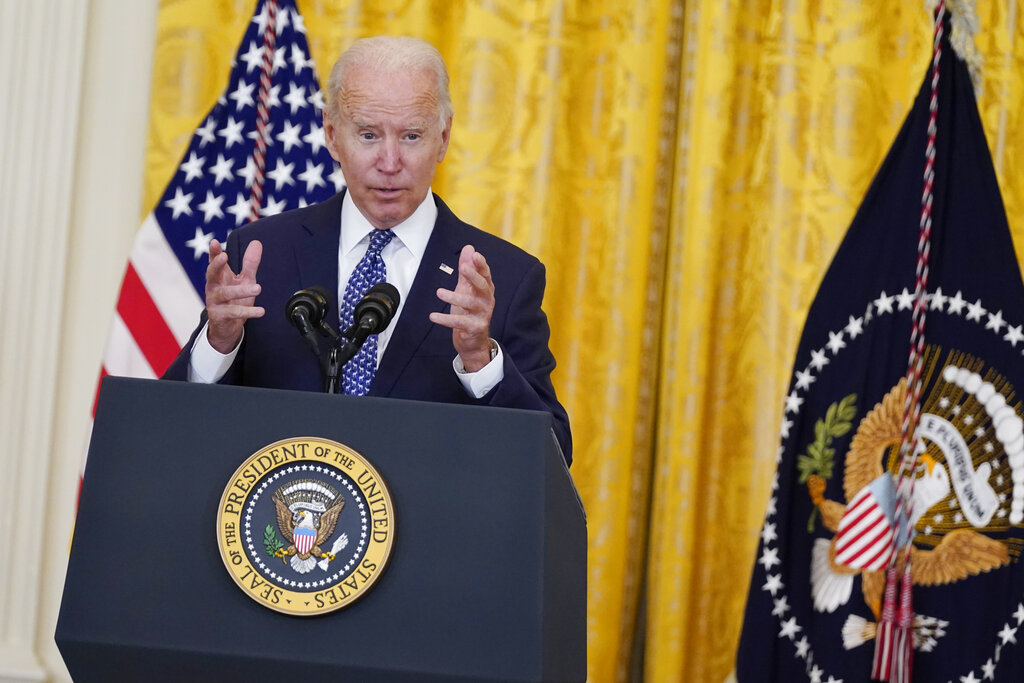 President Joe Biden speaks during an event to celebrate labor unions, in the East Room of the White House, Wednesday, Sept. 8, 2021, in Washington. (Photo: AP)

President Joe Biden glossed over important details and oversimplified the facts in his boast about support from the United Auto Workers union for his effort to dramatically increase sales of electric vehicles by decade's end.

In his remarks Wednesday, Biden failed to say that UAW did not endorse the EV targets he set in an executive order signed last month. The union's support is also dependent in part on robust government support for union-made cars in the form of tax credits in legislation pending in Congress — something that is far from guaranteed to happen.

A look at the claim:

BIDEN, praising the work of UAW members: “The main ‘Big Three’ (automakers) have decided along with the support of those unions on building, going electric, so we own that market.”

THE FACTS: Not exactly. While UAW has expressed general support for more EV sales, it has repeatedly declined to back goals urged by Biden as part of his ambitious plan to combat climate change, including the 40% to 50% target agreed to by the largest automakers.

Biden last month announced his plan to “own” the EV market over foreign competitors, signing an order setting a goal that half of all new vehicles sold in 2030 will be zero-emissions vehicles, which environmental groups say is needed to significantly reduce greenhouse gas emissions. That would be a seismic shift in the U.S. from internal combustion engines to battery-powered vehicles.

Transportation is the single biggest U.S. contributor to climate change.

The United Auto Workers union, in fact, has voiced concerns about being too hasty with an EV transition because of the potential impact on industry jobs. Since electric vehicles generally have 30% to 40% fewer parts and are simpler to build, fewer workers will be needed to assemble them. That will likely mean a reshuffling of jobs, as workers who once made engines, transmissions and other components for gas-powered cars have to switch to electric motors and batteries.

At the signing of Biden’s order, UAW did not endorse a target, pointedly saying it stands behind the president to ”support his ambition not just to grow electric vehicles but also our capacity to produce them domestically with good wages and benefits.”

Both UAW and the “Big Three" automakers — Ford, General Motors and Stellantis, formerly Fiat Chrysler — have made clear that a “dramatic shift” can only happen with incentives for electric vehicle purchases, adequate government funding for charging stations and money to expand electric vehicle manufacturing and the parts supply chain.

In a bipartisan infrastructure bill awaiting congressional passage, there is $7.5 billion for grants to build charging stations, about half of what Biden originally proposed. He also had wanted $100 billion for tax credits and rebates to entice people into buying electric vehicles. At least some of that money was expected to be incorporated in a $3.5 trillion spending bill that is facing resistance in Congress.