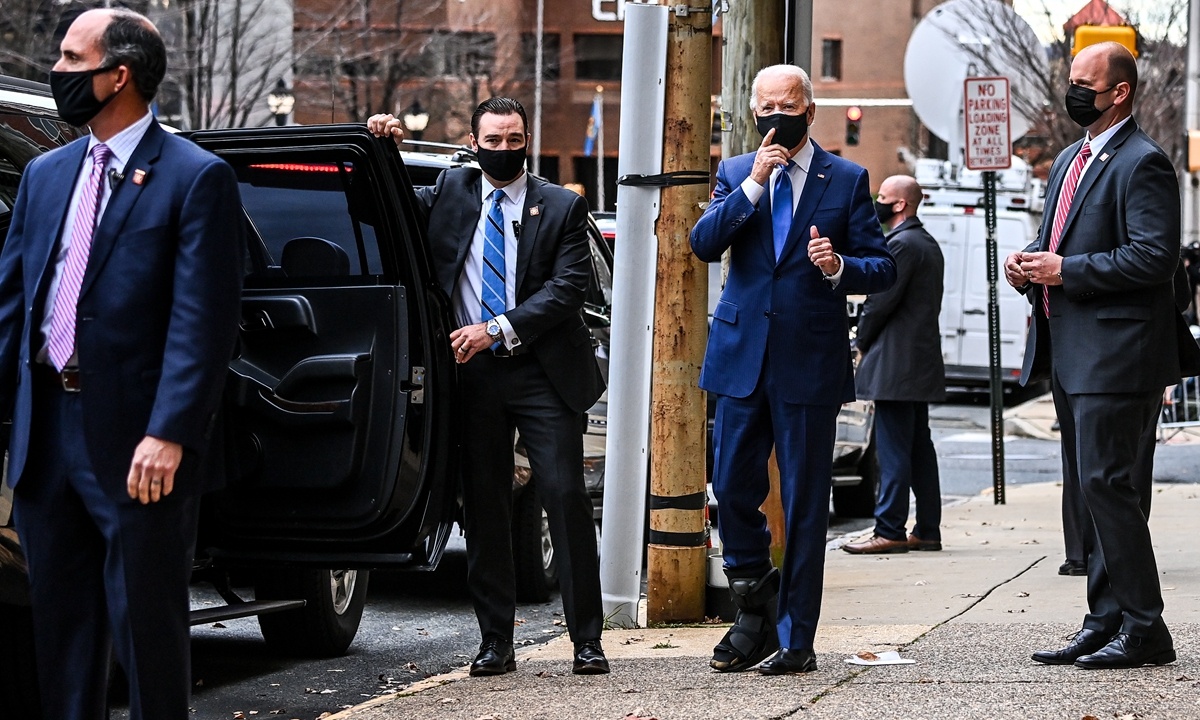 US President-elect Joe Biden (second right) wears a boot after he twisted his ankle as he departs after an event at The Queen Theater in Wilmington, Delaware, the US on Tuesday. (Photo: AFP)

US President-elect Joe Biden presented his economic team on Tuesday and pledged they would lead the charge on a plan to provide more relief for the faltering US economy, which his nominee for Treasury secretary called an "American tragedy."

The diverse group, featuring women and minorities in key roles, is set to inherit the fallout from millions of job losses - including an ongoing wave of corporations laying off workers and small businesses shutting their doors as the number of coronavirus cases spikes.

Even with good news on possible vaccines, economists warn they may not come soon enough to prevent further damage as an initial sharp recovery loses steam.

"I know times are tough, but I want you to know that help is on the way," Biden said at the event to introduce the "tested and experienced" team led by former Fed chief Janet Yellen, his pick for Treasury secretary.

He called on Congress to rapidly approve a "robust" new relief package, but said anything accomplished by the lame-duck legislature will not be enough.

"We need to act now and we need to work together," Biden said, promising to "build a new American economy that works for all Americans."

He said his team already is working on a new plan that can be launched "on day one" to revive the economy and create more than 18 million jobs through investments in infrastructure, clean energy and manufacturing.

The world's largest economy shed more than 20 million jobs in the early weeks of the pandemic, and has regained only about half of those.

Yellen previously made history as the first woman to lead the Fed, and would score another first if confirmed as Treasury secretary, a job that has never been held by a woman.

She is well regarded for navigating the central bank through the aftermath of the global financial crisis, and said the country is facing another "historic" crisis that is hitting the most vulnerable people the hardest.

"So many people struggling to put food on the table and pay bills and rent. It's an American tragedy," she said.

Outgoing Treasury Secretary Steven Mnuchin Tuesday reiterated his support for forging a compromise, although he said it should be a limited package.

"I will continue to work with Congress," Mnuchin said. "I urge Congress to pass something quickly."