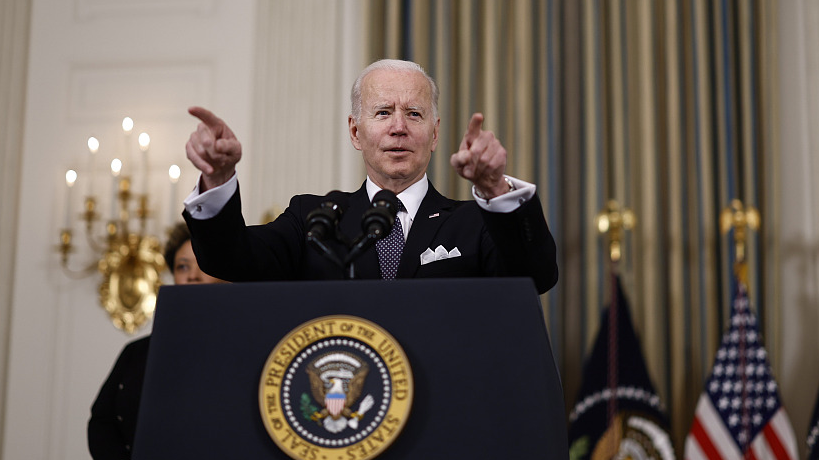 On March 28, U.S. President Joe Biden released a multitrillion dollar budget proposal. It came with a record peacetime national defense budget request of $813 billion to Congress, and played up the so-called China "challenge" on several fronts, to advance the plan's traction among hawks. "We're once again facing increased competition from other nation states — China and Russia — which are going to require investments to make things like space and cyber and other advanced capabilities," said Biden in his address.

As Americans struggle with rising prices, and await a longer-run U.S. growth pace of under 2%, ideological anxieties towards China ought to take a backseat, rather than be reinforced by a presidency increasingly at odds with public expectations.

For Biden, "future strategic competition with China" serves as a key rationale for projecting U.S. military and diplomatic strength, on the back of the budget plan. The challenge there is that heavy investment in military readiness does not send a message of assurance to skeptical American allies, including those in Asia, who are deep-down unwilling to see military adventurism risk regional aspirations for peace.

The Department of Defense was quick to point to the budget's perceived utility in implementing the 2022 National Defense Strategy, a document informed by groundless assertions of a "multi-domain threat" posed by Beijing to the United States.

The Pentagon, in its admiration for Biden's record peacetime national defense budget request, is also wrong to paint China as a "pacing challenge" that must serve as a priority objective for Washington in the Indo-Pacific region. Contrary to all the speculation, Beijing's military, economic and technological potential is never averse to the "international system," and is aimed at supporting its national priorities that are in line with peacebuilding and cooperation world-over. 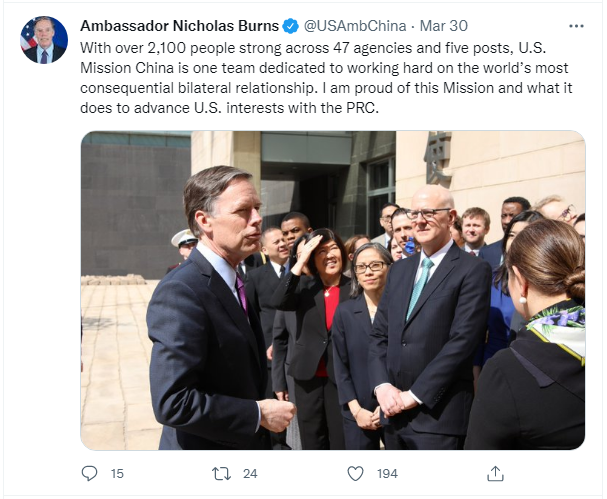 The U.S. Ambassador to China Nicholas Burns defines the U.S.-China ties as "the world's most consequential bilateral relationship." (Screenshot via Twitter)

Another cause for global alarm is the use of futile war scenarios with Beijing in Biden's defense spending push. Consider the $130 billion proposed for the production of new weaponry such as hypersonic missiles: the Biden administration's budget rationale is partly driven by the assumption that a potential future war with Beijing necessitates such investment.

It is important to be reminded that key U.S. partners, including those in Southeast Asia, don't share Washington's China animus, and view regional stability as pushback against destructive weaponry. These consistencies take the lid off the Pentagon's suggestion that it is the "future security environment" – and not Washington's personal desire to militarize – that is at the heart of such controversial modernization in capabilities.

Interestingly, Biden has billed the $5.8 trillion budget plan as a proposal that values the safety and security of Americans at home. Given the likelihood that U.S. Congress may push Biden's defense spending increase to a much larger sum, it is the American defense contractors – not the people – who will emerge as the chief beneficiaries. Consider the plan's outsized advantage to sanctioned military enterprises Lockheed Martin Corp and Raytheon Technologies. Both are longtime participants in Washington's unwarranted arms sales to China's Taiwan region, and were tapped by the Pentagon to serve an objective at odds with the public's view on war: Hasten the development of hypersonic weapons systems as a way of touting parity with Beijing. What this military obsession ignores is that these same defense companies have skirted oversight on spending, and disadvantaged the very American taxpayer that Biden insists he shall protect.

Ultimately, the $5.8 trillion comprehensive budget plan appears tall on rhetoric about an America reinvented, yet loses credibility on the safety and security of citizens and allies. The perceived wisdom is that by painting China as a "pacing challenge," Biden can successfully score a record-setting national defense budget and link it as the interest of the people.

If the end goal was salvaging a national leadership riddled with shortcomings, here is a perfect recipe to illuminate more weaknesses.