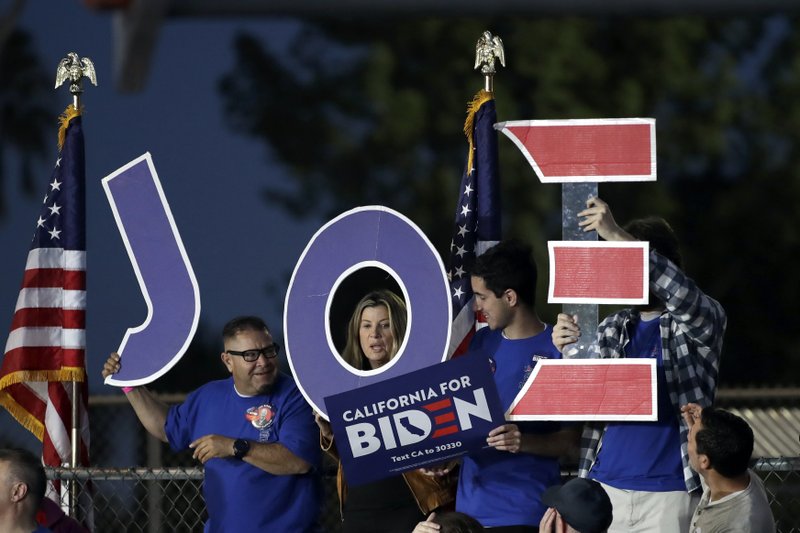 He won’t have that problem again.

Support for Biden from the Democratic establishment abruptly materialized Wednesday as influential donors lined up behind the former vice president following his romp through 10 of the 14 contests. The showing reshaped the primary into a two-person race between him and Vermont Sen. Bernie Sanders, providing clarity in what had been a crowded field.

In Los Angeles, a pricey Biden event suddenly sold out on Tuesday night. In Florida, a prominent fundraiser received an outpouring of phone calls from donors who now want to help Biden clinch the Democratic nomination.

Others who hadn’t been in touch with the campaign were nonetheless laying the groundwork for big-dollar events. Bryan Rafanelli, a major Democratic donor in Boston who was one of Pete Buttigieg’s top fundraisers, was flooded with requests to host a gathering after announcing his support for Biden on social media.

“I don’t have a date. I haven’t talked to the Biden people,” Rafanelli said. “I don’t want to get out over my skis. But it’s going to happen.”

Democratic megadonor Susie Tompkins Buell, who also backed Buttigieg before he dropped out, said in a text message that she now supports Biden and is open to hosting an event.

Biden has never been a particularly successful fundraiser. His perseverance over better-funded candidates, including two billionaires who poured their personal wealth into their campaigns, demonstrates the limits of unlimited money.

But it also underscores the indecision that gripped many moderates, donors included, who had several candidates to choose from until Biden cleared much of the field with a commanding win in Saturday’s South Carolina primary.

“It has been a lot easier to fundraise for Joe Biden in the last 72 hours than it had been over the previous 72 days,” said Alan Patricof, a Wall Street venture capitalist and longtime Biden supporter.

Now that Biden is in a tight contest with Sanders, his campaign is poised to be flooded with cash — the very resource he has sorely lacked. The money will come from donors who say they are nervous about Sanders’ open embrace of democratic socialism and fear his nomination would result in President Donald Trump’s reelection.

“Everyone likes a winner. It’s not very complicated,“ said Tom Nides, a former deputy secretary of state and adviser to Hillary Clinton. “Joe Biden has proven it’s not all about money and not all about organization — it’s about authenticity.”

Biden was running on fumes headed into Super Tuesday, drastically outspent across the country by billionaire former New York Mayor Mike Bloomberg. Billionaire Tom Steyer flooded the airwaves with pricey ads in South Carolina, where he tried to cut into Biden’s support from black voters. And for much of the contest, he lagged in fundraising behind Sanders, Buttigieg and Massachusetts Sen. Elizabeth Warren.

The sudden interest in Biden is intense — and overwhelming.

At Wednesday’s fundraiser in the posh Bel Air neighborhood of Los Angeles, there was no available parking, and valet service was over capacity, according to a person with direct knowledge of the event. Held at the home of Paramount Pictures executive Sherry Lansing, it exploded from 80 to 350 registered attendees, including actor Leonardo DiCaprio, in the days leading up to it.

A Florida consultant said out-of-state donors asked about flying in for a Biden fundraiser. Both people spoke on the condition of anonymity to discuss planning details.

Despite the flood of incoming cash, Biden’s newfound financial success could also prove to be a liability. Sanders took aim at him over the issue during a news conference in Vermont on Wednesday.

“You’ve got a candidate from the establishment going out to rich people’s homes, raising all kinds of money,” Sanders said.

Such rhetoric is precisely why some wealthy donors are uneasy about Sanders, who calls for political revolution, and are now eager to work with Biden.

For some longtime supporters, the change in fortunes is cathartic after a monthslong stretch of tough headlines about poorly attended town halls and uneven debate performances that seemed to reinforce a perception of Biden as someone doomed to lose.

“Primaries are always messy,” said Steve Westly, a Silicon Valley venture capitalist who has been raising money for Biden since he got in the race. “Momentum is everything, and people want to be a part of the wining side.”

Biden’s financial picture began to shift the week before the South Carolina primary. A super PAC backing him called Unite the Country, raised $2.5 million that week. Biden’s campaign also reported raising $10 million in the days after.

Since then, Biden aides say they’ve taken in $7.1 million online during a 42-hour period that included Super Tuesday. Strategists for Unite the Country, which can raise and spend unlimited sums so long as they don’t coordinate with Biden’s campaign, now expect to take in even more.

That will help get Biden’s message out while defending him from attacks by Sanders. The group, which is cutting an ad now, expects to be on the air soon in Missouri, Michigan and Mississippi.

“We are going to defend our guy,” said Unite the Country strategist Steve Schale.