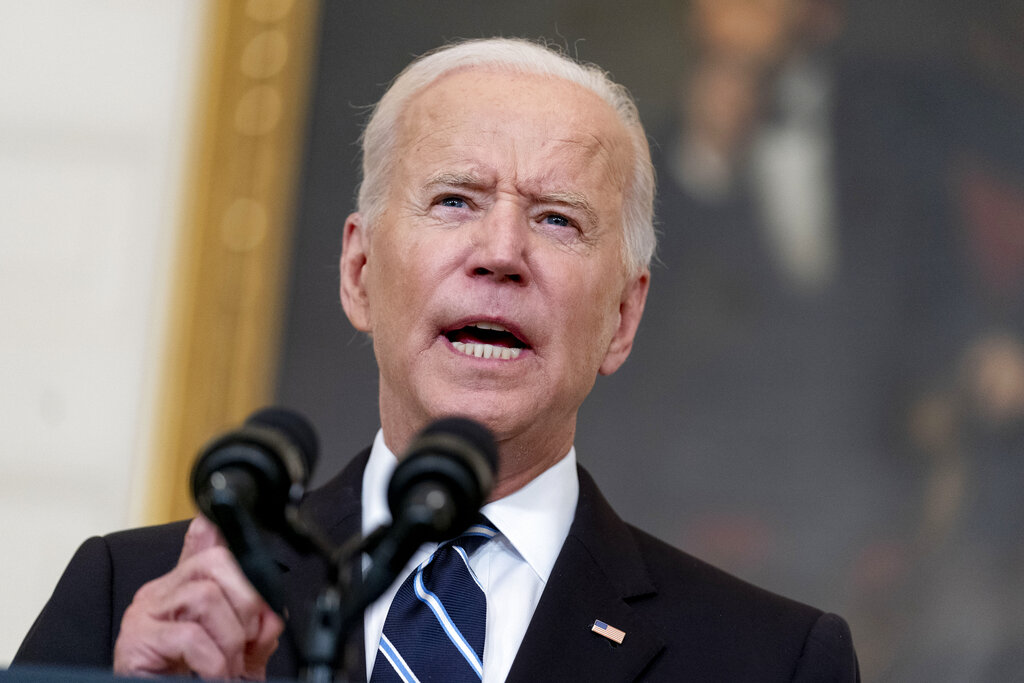 They're a source of frustration. A risk to their fellow citizens. A threat to the nation's economic recovery.

President Joe Biden is trying to concentrate the anger of the nation's inoculated majority against the stubborn 25% of eligible Americans who remain unvaccinated against COVID-19.

Nearly 8 months after declaring "war" on the coronavirus as he took office, Biden on Friday announced far-reaching new federal requirements that could force millions to get shots. In doing so, he embraced those who haven't rolled up their sleeves as a new foe amid a devastating surge in cases that is straining the nation's health system and constricting its economy.

"We've been patient, but our patience is wearing thin," Biden said from the State Dining Room. "And your refusal has cost all of us."

The unvaccinated minority, he added, "can cause a lot of damage, and they are."

The speech marked the starkest public airing of Biden's own frustrations over the direction of the COVID-19 pandemic and a striking departure from his familiar talk of national healing. In essence, he scolded a minority of the country for holding back the majority. And he had especially harsh words for public officials who have stoked or exploited vaccine fears for political gain.

Biden's forceful posture reflected a calculus that far more Americans will support his action than will be drawn to the visceral anger that some on the right directed at his announcement — evidenced, in his view, by the fact that a supermajority of the country has already been vaccinated.

It was also driven by self-interest, as Biden tries to defend his own job performance on the issue most important to voters.

The resurgence of the virus has sent his poll numbers to the lowest point yet of his presidency. An AP-NORC poll conducted in August found that 54% of Americans approved of Biden's stewardship of the pandemic, down from 66% the month before, driven by a drop in support among Republicans and political independents.

The drop in approval has coincided with a summer backslide in the fight against the virus. Biden blamed the spiking cases for August's slower-than-expected job growth and warned the nation could continue to face economic penalty if it doesn't get the virus under control.

It was just two months ago that Biden prematurely declared the nation's "independence" from the pandemic. Now, despite more than 75% of Americans having at least one dose of vaccine, the U.S. is seeing about 300% more new COVID-19 infections a day, about two-and-a-half times more hospitalizations, and nearly twice the number of deaths compared to the same time last year.

"We're in the tough stretch, and it could last for a while," Biden warned.

Speaking directly to the fears of Americans who have received a dose, Biden said, "For the vast majority of you who've gotten vaccinated, I understand your anger at those who haven't gotten vaccinated. I understand the anxiety about getting a breakthrough case." He pledged that his administration was moving forward swiftly to secure booster doses of the mRNA vaccines as soon as this month to provide more durable protection against the more transmissible delta variant.

In announcing that the Transportation Security Administration will double fines on travelers who refuse to wear masks on planes, Biden was unforgiving, "If you break the rules, be prepared to pay."

White House officials maintain Biden isn't trying to stoke anger in a vacuum but said he hopes that reflecting the irritation of the nation's majority — combined with new vaccine requirements — will serve as a productive step toward putting the virus back in check. Defeating the virus, they argue, now requires defeating the reluctance of the 80 million people who have yet to get a shot.

It's a head-spinning change in tone from a White House that spent much of the year steadfastly avoiding any appearance of criticism of those who were waiting to be vaccinated.

Federal, state and local governments invested billions on education, advertising and outreach about the safety and efficacy of the vaccines. They gave away cash, cars, tuition, sports tickets and beer. Even as some Republicans criticized Biden's handling of the vaccination rollout, the White House for months held its tongue.

But as more Americans rolled up their sleeves, officials said, Biden grew more comfortable first taking on those his administration blames for spreading misinformation about the shots and now imposing the vaccination requirements his administration had previously avoided.

Even as his posture has stiffened, Biden has thus far held off on even more coercive requirements, such as requiring shots for domestic air travel.

Still, the reaction from Biden's opponents was swift.

Mississippi Republican Gov. Tate Reeves tweeted: "The vaccine itself is life-saving, but this unconstitutional move is terrifying. This is still America, and we still believe in freedom from tyrants."

Ronna McDaniel, the chairwoman of the Republican National Committee, called it an "unconstitutional, un-American federal decree." South Carolina Republican Gov. Henry McMaster responded without nuance: "Rest assured, we will fight them to the gates of hell to protect the liberty and livelihood of every South Carolinian."

The White House is gearing up for legal challenges and believes that even if some of the mandates are tossed out, millions of Americans will get a shot because of the new requirements — saving lives and preventing the spread of the virus.

Biden has found unusual allies in the business community, which is eager for a return to normalcy after 18 months of pandemic disruption. They may not like Biden's proposed tax increases, but they appear to have bought into his argument that the nation can ill afford to allow the unvaccinated to "undo" progress on strengthening the economy.

"We look forward to working with the administration to ensure any vaccine requirements are structured in a way that does not negatively impact the operations of manufacturers that have been leading through the pandemic to keep Americans safe," said National Association of Manufacturers President and CEO Jay Timmons.

Despite the vehement reaction of Biden's opponents, the president can take comfort in certain data points.

An Axios/Ipsos poll conducted July 30-Aug, 2 found that 58% of Americans, including 79% of those who are vaccinated, said they blame the unvaccinated for rising COVID-19 cases and the spread of new variants in the U.S. The poll allowed multiple responses, but the share saying the unvaccinated were to blame was higher than those blaming other causes, including people from other countries traveling to the U.S. (32%) and Donald Trump (28%).

White House aides point to an even clearer metric — the more than 208 million Americans who have already gotten a shot.