WORLD Biden says Afghan forces must fight for themselves

Biden says Afghan forces must fight for themselves 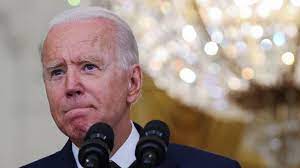 U.S. President Joe Biden said on Tuesday that the Afghan troops must fight for themselves as multiple cities have fallen to the Taliban in the past few days.

"We spent over a trillion dollars over 20 years. We trained and equipped with modern equipment over 300,000 Afghan forces. And Afghan leaders have to come together," Biden told reporters at the White House. "They've got to fight for themselves, fight for their nation."

The United States will continue to provide Afghan forces with close air support, food, equipment, salaries and make sure the Afghan air force is operable, said Biden. "But they've got to want to fight. They have outnumbered the Taliban."

"We are going to continue to keep our commitment," he added, saying he does not regret his decision to withdraw U.S. troops from the country.

Biden ordered the U.S. military to end its mission in Afghanistan by the end of this month. The U.S. Central Command said over 95 percent of the drawdown had been completed.

Last Monday, Afghan President Mohammad Ashraf Ghani said in his remarks to the parliament that Kabul had a six-month security plan to change the situation in the battleground. Meanwhile, he blamed the withdrawal of U.S. troops for the worsening situation.

The Taliban on Tuesday claimed it had seized Farah city, capital of Afghanistan's western Farah province, marking the seventh provincial capital to fall to the group in less than a week.

State Department spokesperson Ned Price said earlier in the day that the security situation in Afghanistan is of grave concern to the United States.

"What we are doing around the clock is seeking to find a way out of this," he told reporters in a daily briefing, noting that U.S. Special Representative for Afghanistan Reconciliation Zalmay Khalilzad is in Doha for meetings with representatives from regional countries to press for a reduction in the violence and a ceasefire.

The United States carried out airstrikes against the Taliban in recent days as the insurgent group made rapid military advances across the country.

Pentagon Press Secretary John Kirby said on Monday that the U.S. military will continue to use airstrikes to support Afghan forces "where and when feasible," but he declined to speculate if such air support will continue beyond Aug. 31.

He said the Afghan forces have the capability and advantages in combat with the Taliban, stressing the need for Kabul to exert both political and military leadership.

In recent weeks, many Afghan cities and about half of the country's 34 provinces have seen heavy battles and street fighting between Afghan forces and Taliban militants.

Afghan Defense Ministry said in a statement on Tuesday that up to 47 militants have been confirmed dead as fighting planes struck Taliban fighters' hideouts and positions in the southern Kandahar province.