WASHINGTON, Aug. 16 (Xinhua) -- U.S. President Joe Biden on Monday stood by his decision to withdraw U.S. troops from Afghanistan while acknowledging Kabul's collapse to the Taliban came much sooner than Washington had anticipated. 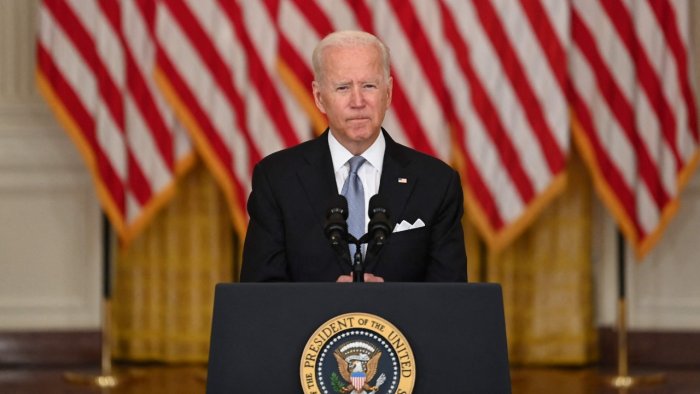 "I stand squarely behind my decision," said Biden in a televised speech from the White House. "The truth is this did unfold more quickly than we had anticipated."

The speech came one day after the Taliban completed a stunningly swift takeover of the war-torn country's capital of Kabul on Sunday after Afghan President Mohammad Ashraf Ghani left the country.

"If anything, the developments of the past week reinforced that ending U.S. military involvement in Afghanistan, now, was the right decision," said Biden who returned to the White House from Camp David ahead of schedule.

"American troops cannot and should not be fighting in a war and dying in a war that Afghan forces are not willing to fight for themselves," he said.

In just over a week, the Taliban, which the U.S. overthrew in 2001, went from winning control of its first provincial capital to taking over Kabul.

Saying he was willing to take criticism over the decision on troops withdrawal, Biden also cast blame on top Afghan leaders, Afghan forces and his predecessor Donald Trump for the unfolding crisis in Afghanistan.

"We have to be honest, our mission in Afghanistan is taking many missteps - made many missteps over the past two decades... I know my decision will be criticized, but I would rather take all that criticism than pass this decision on to another president... yet another one, a fifth one," he said.

Trump, who inked a deal with the Taliban to withdraw U.S. forces by this past May, also bears part of the responsibility for the current situation, said Biden.

"The choice I had to make as your president was either to follow through on that agreement or be prepared to go back to fighting the Taliban in the middle of the spring fighting season," Biden said. "There would be no ceasefire after May 1."

Biden said the U.S. mission in Afghanistan to defeat the Sept. 11 attackers and ensure al-Qaida could not use Afghanistan as a base to hit the United States had been completed.

"I made a commitment to the American people when I ran for president that I would bring America's military involvement in Afghanistan to an end. While it's been hard and messy and, yes, far from perfect," he said.

Biden said the United States will evacuate from Afghanistan thousands of American citizens who have been living and working in the country, warning the Taliban of "swift and forceful" response if these efforts come under attack.

The United States would expand refugee access to include other vulnerable Afghans not already covered by special immigrant visas, volunteers for nongovernmental organizations and personnel from U.S. news agencies, he said.

Defense Department press secretary John Kirby said Monday that 1,000 more troops would be deployed to Kabul, eventually bringing the total force there to more than 6,000. About 2,500 U.S. troops are currently on the ground.

Kirby confirmed two incidents in which U.S. troops fired on armed people at the airport, resulting in the death of two of them.

The situation in Afghanistan will continue to "remain fluid in the coming hours and likely in the coming days," State Department spokesperson Ned Price told reporters in a press briefing on Monday.

"There has not been a formal transfer of power," Price said while being asked whom the United States recognizes as a leader of Afghanistan, adding that the U.S. administration is still pushing for a political settlement.

"This is something that we are working again with the international community. You saw in the statement from the UN, a clear consensus emerge that a political settlement will be in everyone's interests," said Price.

U.S. Special Representative for Afghanistan Reconciliation Zalmay Khalilzad and his team remained in the Taliban's diplomatic base of Qatar where U.S. officials have been in talks with the group, Price said.

A majority of Americans disapproved of Biden's handling of U.S. military operations in Afghanistan, according to a new poll.

The survey, conducted by the Trafalgar Group, found that 69 percent of polled Americans disapproved of Biden's handling of U.S. military presence in the war-torn country, with only 23 percent approving.