Biden says he picked South Carolina as spot for apology

Democratic presidential candidate Joe Biden said Sunday he chose South Carolina to deliver an apology for his controversial remarks about segregationist senators because he wanted to offer it to an audience most likely to have been offended by his words. 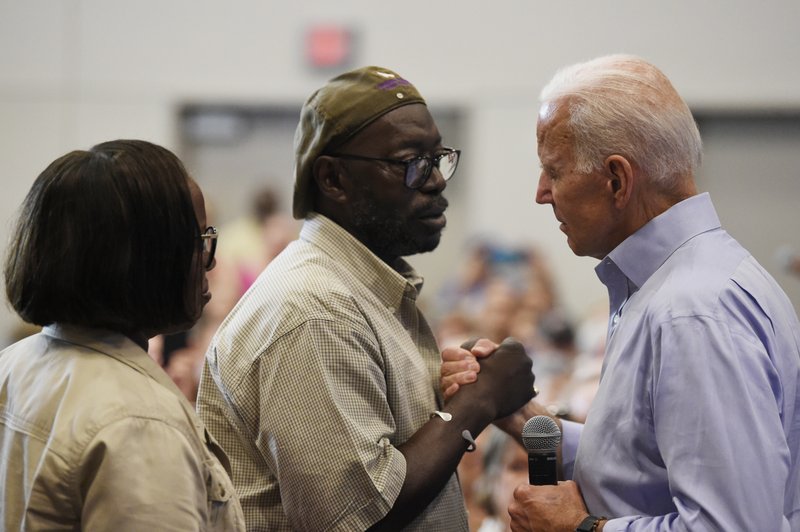 Kamala Harris, a rival for the Democratic nomination who sharply criticized Biden for those remarks and his views on federally mandated busing, used her campaign trip to the state Sunday to praise Biden for apologizing.

South Carolina looms large over the early months of the Democratic contest because it is fourth in line behind Iowa, New Hampshire and Nevada in voting for a nominee, is the first state in the South to vote, and has the largest African American electorate in the early states. As the state is a test of black support, both Biden and Harris as well as other Democrats have been addressing African American issues during campaign visits to the state.

The criticism of Biden began last month after he recalled how, as a young senator from Delaware, he worked on some issues with two Southern Democratic segregationists in the US Senate even though they agreed on little, offering that period as an example of a long-ago time of civility and himself as a consensus-seeker.

"Was I wrong a few weeks ago?" Biden asked a mostly black audience of several hundred people in Sumter on Saturday, the first day of a weekend visit to South Carolina. "Yes, I was. I regret it, and I'm sorry for any of the pain of misconception that caused anybody."

At a Charleston restaurant on Sunday, Biden was asked why he was apologizing now for remarks from several weeks ago.

"It's the first opportunity I've had to do it in a fulsome way. If any comments I made were taken in a way that people took offense from them, and I am truly sorry for that, that was not my intention," the former vice president said.

Biden added later: "The fact of the matter is, that's why I chose here in South Carolina and chose an audience that in fact would be the most likely to have been offended by anything that was said."

Harris, visiting Hartsville on Sunday, said Biden was "right to recognize the impact of his words" and praised him for "having the courage to do it."

Though the issue is not at the forefront of the 2020 primary, it could resonate in a state with a complicated history with race and segregation.

During his weekend in the state, Biden defended his record on racial issues and reminded voters of his ties to former President Barack Obama, whose popularity in South Carolina remains high. Harris countered by saying voters are "going to make their decisions based not just on who they were associated with, but ... the work we've done, and most importantly our plans for the future of America."

On a different issue but one close to home for South Carolina voters, Biden said Sunday he wants to make mental health and post-traumatic services among his top health care priorities if elected president.

During a town hall meeting in Charleston, Biden said that dealing with mental health care "is the single most consequential thing that we have got to take care of in America right now."

Biden spoke in response to a question from Felicia Sanders, a survivor of the 2015 massacre at Charleston's Mother Emanuel AME Church. Sanders said she has been traumatized since the shooting, in which nine were killed.