WORLD Biden says he plans to run again in 2024

Biden says he plans to run again in 2024 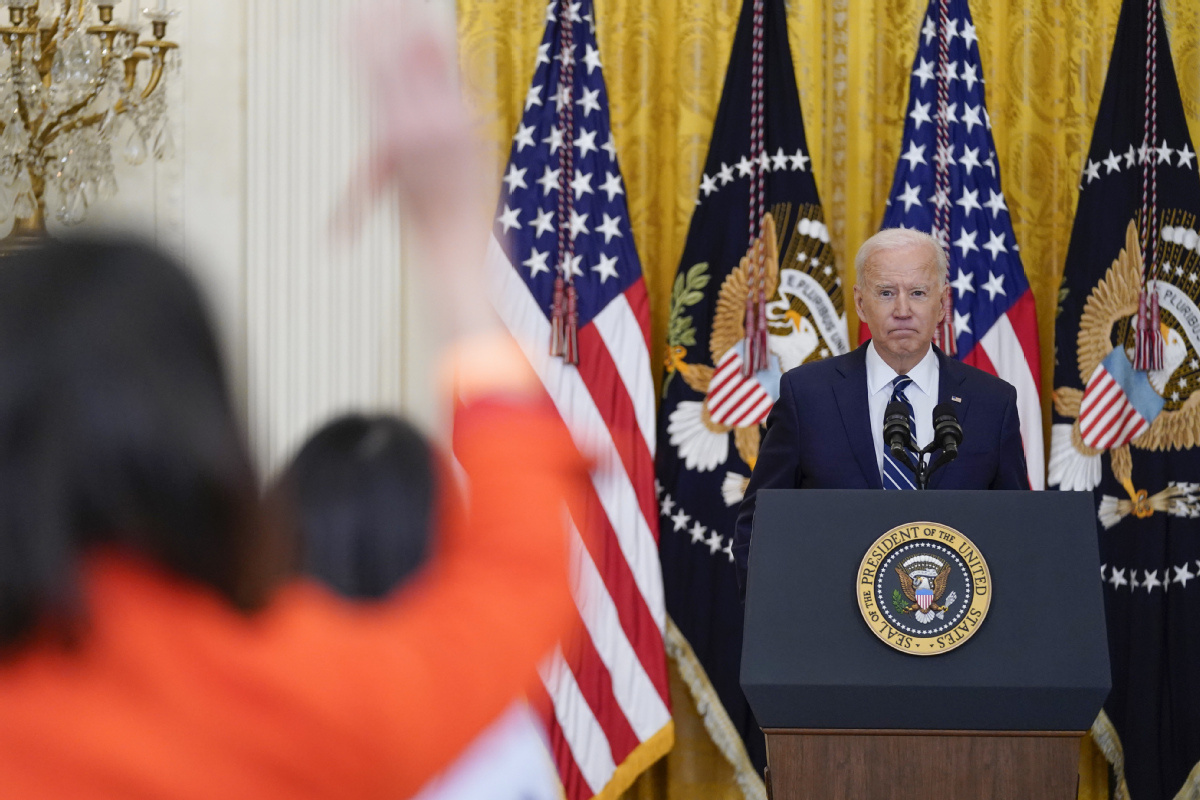 US President Joe Biden speaks during a news conference in the White House on Thursday. (Photo: Agencies)

US President Joe Biden on Thursday said he expects to run for president again in 2024 and defended his policy to provide shelter to unaccompanied children crossing the border from Mexico at his first solo news conference since taking office.

Appearing before reporters for more than an hour, Biden seemed well-prepared, read from written papers occasionally and calmly took questions.

Only 40 reporters were permitted in the East Room for the news conference because of COVID-19 restrictions; all wore face masks and were seated apart. Biden entered the room wearing a mask and took it off to answer questions.

Traditionally, there is no question as to whether a first-term president will run for reelection. But questions about Biden's 2024 intentions have swirled since even before his November victory－because of his age. At 78, Biden is the oldest person to assume the presidency on Jan 20.

In office for only two months, his 2024 plans have a direct effect on his political strength. If viewed as a one-term president, Biden would effectively be a lame duck with diminished sway at home and abroad as he pursues an aggressive agenda.

Given a high-profile opportunity to clarify his status on Thursday, he sought to create the impression he was not a lame duck, but he avoided making any definite promises.

Struggling to contain a surge in border crossings, Biden said no previous administration had refused care and shelter to children coming over from Mexico－except that of his predecessor Trump.

"I'm not going to do it," said Biden, noting he had selected Harris to lead diplomatic efforts with Mexico, Honduras, Guatemala and El Salvador aimed at stemming the migration flow.

Biden backed away from a May 1 deadline to withdraw US troops in Afghanistan after Trump tried but failed to pull them out before leaving office. There are about 2,500 US troops there.

"It's going to be hard to meet the May 1 deadline," said Biden. But he added:"We are not staying a long time" in Afghanistan, the site of the US' longest war. He said he did not think the troops would still be there next year.

Biden also called for Republicans in the US Congress to help him move forward with his agenda as he takes on issues like gun control, climate change and immigration reform.

On the mass shootings taking place days apart over the past two weeks that killed altogether 18 people, Biden, who has urged Congress to pass gun reform bills, played down the urgency of the legislative actions this time.

"Successful presidents, better than me, have been successful, in large part, because they know how to time what they're doing," he said."Order it. Decide priorities."

He said he believes the Democratic-controlled US Senate should make it harder for Republicans to use a parliamentary blocking maneuver called the filibuster that requires 60 votes to advance most legislation in the 100-seat chamber, saying it is being abused.

Biden was repeatedly pressed to defend his migration policy along the US border with Mexico.

Biden said the increase in migration was cyclical.

"There is a significant increase in the number of people coming to the border in the winter months," he said."It happens every year."

Agencies, Ai Heping in New York and Xinhua contributed to this story.