Striking a defiant tone, President Joe Biden said Monday that he stands “squarely behind” his decision to withdraw U.S. forces from Afghanistan as he acknowledged the “gut-wrenching” images coming out of the country after the swift Taliban takeover of the government. 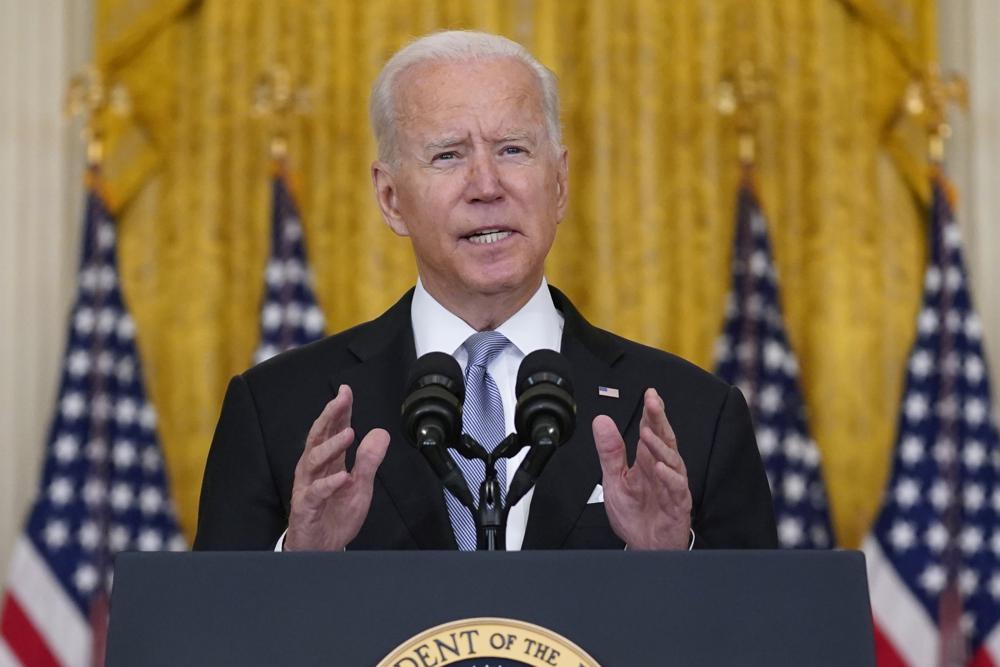 Biden said he had to choose between sticking to a previously negotiated agreement to withdraw U.S. troops this year or sending thousands more service members back into Afghanistan to fight a “third decade” of war.

Biden, sounding resolute in the face of withering criticism of his handling of the situation, said he chose the first option so as not to repeat past mistakes. He reiterated that he had no regrets.

“I stand squarely behind my decision,” the president told the nation in a televised address from the White House East Room after he flew back from the Camp David presidential retreat. “After 20 years, I've learned the hard way that there was never a good time to withdraw U.S. forces.”

Many disagree with Biden's decision, angered by the chaos the world witnessed over the weekend as the Taliban ultimately captured Kabul, the capital, and Afghanistan's president left the country.

Biden said he'd rather take the criticism over the fallout than pass the decision of how and when to withdraw to a fifth U.S. president. He said the decision to leave Afghanistan is “the right one for America" because keeping a U.S. presence there was no longer a U.S. national security interest.

Biden described the images coming out of Afghanistan — especially at the airport in Kabul, where Afghans descended in hopes of fleeing the country — as “gut-wrenching." Video of Afghans clinging to a U.S. Air Force plane and running alongside it as prepared to take off had circulated widely on the internet.

But he did not admit any U.S. fault in how the drawdown was executed. And after batting away the notion of a rapid Taliban takeover when questioned a little over a month ago, Biden acknowledged Monday that "the truth is this did unfold more quickly than we had anticipated.”

He pledged that the U.S. will continue to support the Afghan people, push for regional diplomacy and speak out for the rights of Afghans.

Senior U.S. military officials said the chaos at the airport in Kabul left seven people dead Monday, including some who fell from a departing American military transport jet. The officials spoke on condition of anonymity because they were not authorized to publicly discuss ongoing operations.

Afghans rushed onto the tarmac as thousands tried to escape after the Taliban seized power. Some clung to the side of a U.S. military plane before takeoff, in a widely shared video that captured the desperation as America’s 20-year war comes to a chaotic end.

Another video showed the Afghans falling as the plane gained altitude over Kabul. U.S. troops resorted to firing warning shots and using helicopters to clear a path for transport aircraft.

The Pentagon confirmed Monday that U.S. forces shot and killed two individuals it said were armed, as Biden ordered another battalion of troops — about 1,000 — to secure the airfield, which was closed to arrivals and departures for hours Monday because of civilians on the runway.

The speed of the Afghan government’s collapse and the ensuing chaos posed the most serious test yet of Biden as commander in chief, and he came under intense criticism from Republicans who said he had failed.

Yet the president said the rapid end of the Afghan government only vindicated his decision, noting how the Afghan army surrendered to the Taliban.

“American troops cannot and should not be fighting the war, and dying in a war that Afghan forces are not willing to fight for themselves," Biden said.

Biden, who is viewed as an experienced foreign policy hand dating to his decades-long career in the Senate, including as chairman of the Foreign Relations Committee, expressed confidence in his decision and said he was prepared to take the heat.

He said he was “deeply saddened by the facts we now face, but I do not regret my decision.”

Biden is the fourth U.S. president to confront challenges in Afghanistan and had insisted he wouldn’t hand America’s longest war to his successor. But he is under pressure to explain how security in Afghanistan unraveled so quickly, especially since he and others in the administration had insisted it wouldn’t happen.

“The jury is still out, but the likelihood there’s going to be the Taliban overrunning everything and owning the whole country is highly unlikely,” Biden said on July 8.

Just last week, though, administration officials warned privately that the military was crumbling, prompting Biden on Thursday to order thousands of American troops into the region to speed up evacuation plans.

Presidents Barack Obama and Donald Trump also yearned to leave Afghanistan, but ultimately stood down in the face of resistance from military leaders and other political concerns. Biden, on the other hand, has been steadfast in his refusal to change the Aug. 31 deadline, in part because of his belief that the American public is on his side.

A late July ABC News/Ipsos poll, for instance, showed 55% of Americans approving of Biden’s handling of the troop withdrawal.

Most Republicans have not pushed Biden to keep troops in Afghanistan over the long term and they also supported Trump’s own push to exit the country. Still, some in the GOP stepped up their critique of Biden’s withdrawal strategy and said images from Sunday of American helicopters circling the U.S. Embassy in Kabul evoked the humiliating departure of U.S. personnel from Vietnam.

Senate Republican leader Mitch McConnell deemed the scenes of withdrawal as “the embarrassment of a superpower laid low.”