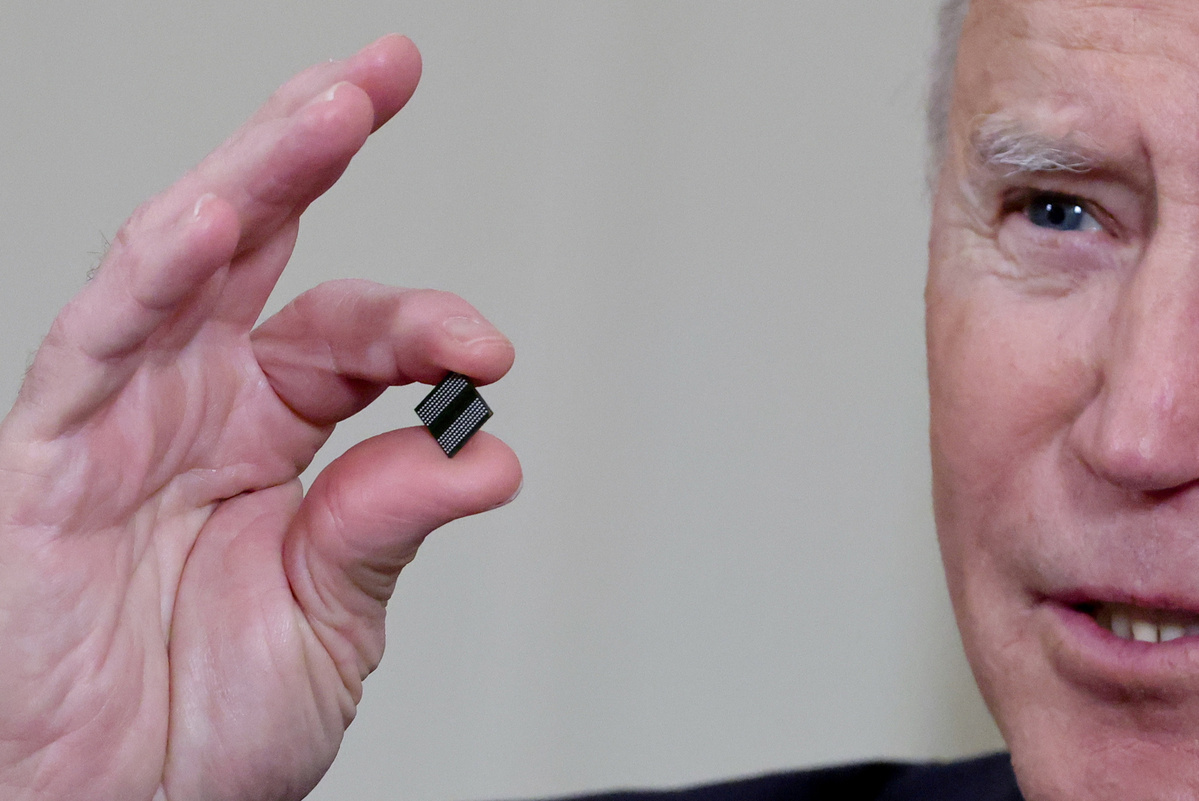 US President Joe Biden holds a semiconductor chip as he speaks prior to signing an executive order, aimed at addressing a global semiconductor chip shortage, in the State Dining Room at the White House in Washington, US, February 24, 2021. [Photo/Agencies]

The White House released its interim national security strategy guidance on Wednesday, vowing to build back better at home and re-embrace international cooperation while stressing that "strategic competition" with China should not preclude collaboration.

In the 24-page document, US President Joe Biden said many of the "biggest threats" the country faces respect no borders or walls and must be met with collective action.

Posing profound dangers are pandemics and other biological risks, the climate crisis, cyber and digital threats, international economic disruptions, humanitarian crises, violent extremism and terrorism, and the proliferation of nuclear weapons and other weapons of mass destruction.

The document outlines a spectrum of challenges the Biden administration hopes to tackle, including the pandemic, "a crushing economic downturn, a crisis of racial justice and deepening climate emergency".

The "interim" strategy is expected to be followed by Biden's inaugural National Security Strategy, which will be released later this year, said Jen Psaki, his press secretary.

Biden signals another reversal from predecessor Donald Trump's "America first" strategy by recommitting to alliances and partnerships, but he seems to have kept an assessment from Trump's National Security Strategy that "economic security is national security".

He said the US will "again embrace international cooperation", including joining with the international community to tackle the climate crisis and other shared challenges and resuming US leadership in multilateral organizations.

Biden also stressed that US strength abroad derives from building back better at home, which should start by "decisively responding to the public health and economic crises unleashed by COVID-19".

The document singled out China and Russia as main threats and vowed to build up "enduring advantages" and present an agenda seeking to outcompete China and any other nation.

Despite the concern of the US side, Beijing has made it clear that it does not want to replace US dominance in the world.

"The bilateral relationship is no zero-sum game; the success of one does not have to entail the other's failure," State Councilor and Foreign Minister Wang Yi said on Feb 22 at a virtual forum held at the ministry.

Chinese Ambassador to the US Cui Tiankai also said at the event, "China has had no intention whatsoever to challenge or displace any country, let alone make it its strategic goal."

At the same time, the interim strategy appeared to toe the line of Biden's consistent, pragmatic China policy since taking office: Keep engaging China if it is in the interests of the US.

"We also recognize that strategic competition does not, and should not, preclude working with China when it is in our national interest to do so," the document says, adding that renewing US advantages ensures engagement with China "from a position of confidence and strength".

It said Washington will conduct practical, results-oriented diplomacy with Beijing and work to reduce the risk of misperception and miscalculation.

That seems to be a nod to the first phone conversation, in early February, between Biden and President Xi Jinping, in which Xi said the two sides should reestablish the various dialogue mechanisms, read each other's policy intentions accurately and avoid misunderstanding and miscalculation.

"We will welcome the Chinese government's cooperation on issues such as climate change, global health security, arms control and nonproliferation where our national fates are intertwined," the document says.