WORLD Biden speaks with Ukrainian president ahead of US-Russia summit

Biden speaks with Ukrainian president ahead of US-Russia summit 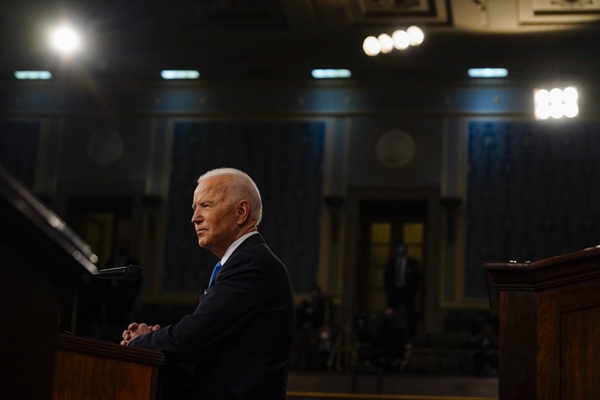 U.S. President Joe Biden on Monday reaffirmed U.S. support to Kiev in a phone call with his Ukrainian counterpart Volodymyr Zelensky, an effort to reassure Ukraine ahead of a U.S.-Russia summit later this month.

U.S. National Security Adviser Jake Sullivan said at a White House briefing that Biden told Zelensky that he "looks forward to welcoming him to the White House here in Washington this summer."

In a statement, Zelensky said he accepted the invitation. In their phone call, Biden reaffirmed support for providing a pathway for Ukraine to join the North Atlantic Treaty Organization (NATO), he added.

The phone call came as Kiev has raised concerns about Biden's upcoming meeting with Russian President Vladimir Putin and the recent U.S. move on the Nord Stream 2 gas pipeline project between Russia and Germany.

In a recent interview with Axios, a U.S. news website, Zelensky said he was "surprised" by and "disappointed" at the U.S. decision to waive sanctions against the company and CEO behind the Nord Stream 2 project.

Ukraine has been in conflict with Russia over Crimea, which became part of Russia in 2014.

Sullivan on Monday said the Biden administration does not expect significant deliverables from the summit. The relationship between the United States and Russia is about verification instead of trust, he added.

Putin on Friday also downplayed the prospects of his first face-to-face meeting with the U.S. president, saying it is unlikely to end in a breakthrough.

Biden will begin the first foreign trip of his presidency later this week. He will visit the UK from June 9 to 13 to attend the Group of Seven (G7) Summit and hold bilateral meetings with leaders of G7 members.

He will then travel to Brussels, Belgium to participate in the NATO Summit, and his meeting with Putin is scheduled on June 16 in Geneva, Switzerland.