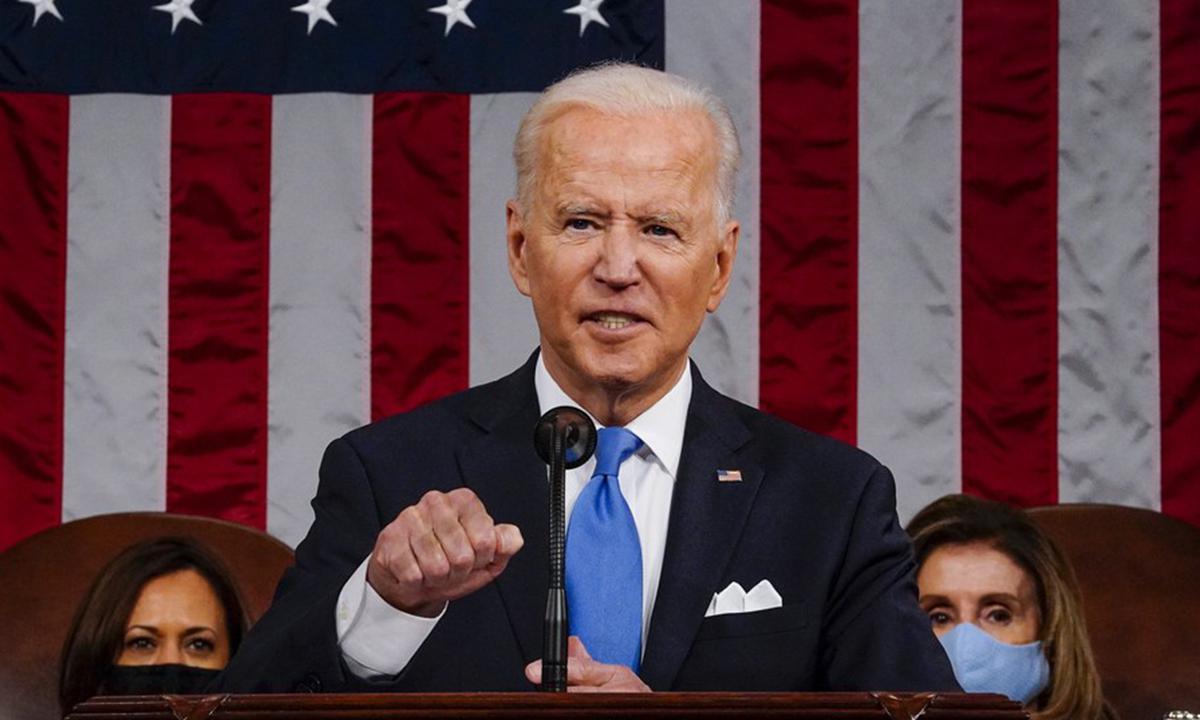 On surface, the Biden administration stresses "competition", instead of confrontation pursued by its predecessors, but the US is actually becoming more hostile as it hypes the issue of the COVID-19 originto stigmatize China again, with Chinese experts warning that the US "competition" policy is in essence confrontation, and this has reflected the declining confidence of Washington's elites on healthy and fair competition with China.

Chinese Foreign Ministry spokesperson Zhao Lijian said at Thursday's routine press conference that China-US relations are just like other relations between major powers - the competition is inevitable. "But using 'competition' to define or dominate China-US relations is absolutely wrong, as this will only cause confrontation and conflicts."

The competition between China and the US should be healthy, which could help both sides improve together, to march forward together, rather than life-or-death competition, Zhao said, noting that "China firmly opposes the US to use competition as a pretext to contain, exclude and crack down on China."

Zhao's remarks are a response to Kurt Campbell, the US coordinator for Indo-Pacific affairs on the National Security Council, who said the era of engagement with China is over.

Campbell, who is Biden's Asia Czar, said Wednesday that US policy toward China will now operate under a "new set of strategic parameters," and "the dominant paradigm is going to be competition," according to Bloomberg.

However, even as Biden ordered the US intelligence community to probe the origin of the COVID-19, a move that apparently targeting China, and his Asia Czar declared an "end" to a period of engagement with China, Chinese and US senior trade officials held their first phone call since Biden took office and struck a relatively positive note in clear contrast to recent tense rhetoric from the US.

All of these recent actions made by the US have sent a sign - the US is losing confidence to win the competition fairly, so it needs to be nasty again, said Chinese experts, who hold that the communication is necessary as the decoupling with China can't be realized.

US President Joe Biden said Wednesday he has directed the US intelligence community to redouble their efforts in investigating the origins of the COVID-19 pandemic and report back to him in 90 days. The announcement comes after "a US intelligence report" hyped the "lab leak" theory that indicate "the origin of the COVID-19 is from China's Wuhan Institute of Virology."

"Biden's order has no respect to science. The investigation on the COVID-19 origin is a scientific issue which should be done by scientists with no political bias and without a deadline. He was just giving orders to his intelligence agencies to produce 'evidence' to smear China," Lü Xiang, an expert on US studies at the Chinese Academy of Social Sciences, told the Global Times.

The intelligence report for virus tracing, in essence, serves the political agenda and the results won't favor China. "Otherwise, it should be scientists, not intelligence agents, to do the job," Diao Daming, an expert on US studies at the Renmin University of China in Beijing, told the Global Times on Thursday.

Using intelligence agencies to "produce the evidence whatever they want" to serve strategic purpose is a long-standing infamous tradition of the US, Lü said, adding that "everyone remembers the 'evidence' that the CIA provided to prove Iraq has weapons of mass destruction, and now the Biden administration might want to play the same nasty trick again."

The US has realized that China's strength receives no significant impact amid the COVID-19 pandemic, and China's reputation and influence are even improving in some regions, especially in the third world, as China is the biggest supplier of vaccines and other medical materials in the world while the US makes no significant contribution, and politicians in Washington don't want to see this at all, said analysts.

The healthy competition should look like the US providing more vaccines to more countries, to stop meaningless propaganda warfare against China, and work together with China to save more lives, and let the rest of the world judge which country is doing better in the global fight against the COVID-19, said a Beijing-based expert on international relations who requested anonymity.

"The COVID-19 battle resembles anti-fascism fight in World War II. Who led the world to win the fight became the leader in the post-war era. Now is the crucial time to see who is more qualified to be that leader in the post-pandemic era," he noted.

The Biden administration won't compete with China in a healthy way, because in nature, the capitalist system is selfish and those capitalists and big corporations behind the Biden administration won't let the White House do so, and the US has no confidence to win such competition with China due to lack of capability to produce massive amount of vaccines and medical materials," he said.

The so-called virus tracing report will be concluded in 90 days and the timing will overlap with some significant planned events in China such as the 100th founding anniversary of the Communist Party of China, and the Biden administration will likely use it to launch an ideological offensive against China, Diao said.

Chinese officials and scholars have warned the US again and again that a zero-sum game is wrong, but US politicians are just obsessed in the zero-sum game, because they hate to see that China barely received harm while they are failing to heal America, said Chinese analysts.

Besides the fight against the pandemic, political elites in Washington are also losing faith in US economic recovery as rounds of stimulus packages have only produced limited effects, and in late 2021 or early 2022, the US economy will hit serious problems, Lü said.

"Cracking down on China and saving the US are irrelevant, but the decision-makers and elites in Washington think this way - when I get a cold, you should have fever as well, and pneumonia would be better," Lü noted.

In other fields like the Taiwan question, the Beijing 2022 Winter Olympics, Xinjiang and Hong Kong affairs, or regional hot spot issues like the turbulence in Myanmar and upcoming power transitions this year in some Southeast Asian countries like the Philippines, the US will make efforts to create trouble for China, at least to slow down China's development, said experts.

"In nature, the Biden administration is also playing the game of confrontation with China, not competition," Lü said.

Although the Biden administration wants to put the "competition" at the center of the China-US relations, Washington still has a desire to communicate with China.

During the phone call between Chinese Vice Premier Liu He and US Trade Representative Katherine Tai, the two sides held "candid, pragmatic and constructive exchanges with an attitude of equality and mutual respect," the Chinese Commerce Ministry said in a statement on Thursday. For its part, the office of the US Trade Representative also described the exchange as "candid" in a statement.

While details of the talks remain unclear, "the dialogue itself is positive," He Weiwen, a former economic and commercial counselor at the Chinese consulates general in San Francisco and New York, told the Global Times on Thursday, adding that the talks mostly focused on issues of principle rather than specifics given huge differences between the two sides over trade issues.

However, the phone call, which took place at the US' request after weeks of calling for a meeting, underscored the Biden administration's core strategy of pursuing both confrontation and engagement with China, according to He. "We should see clearly the nature of the US' toughness toward China has not and will not change. We can't have any illusion about that," he said.

Still, the trade talks highlighted the role of trade between the two countries as a stabilizer for the bilateral relationship, despite major differences on policies, analysts noted, pointing to growing bilateral trade despite a free fall in bilateral relations. In the first quarter of 2021, China's exports to the US jumped 62.7 percent year-on-year, while China's imports from the US increased 57.9 percent, according to Chinese official data. Despite disputes, the two countries have also continued the phase one trade agreement.

The conversation between Liu and Tai is not surprising as the US had expressed willingness to have such communication, Diao said, noting even if the US wants to use "competition" to define bilateral ties, the two sides will have to communicate on the role of competition, and explore possible areas for cooperation.

Different forces inside the Biden administration are competing for influence on the finalization of the strategy on China when the president himself seems not to have a clear and determined idea yet, so maybe Campbell's remarks can't represent the final stance. Other forces who still support the engagement with China might make their move as well, Diao noted.