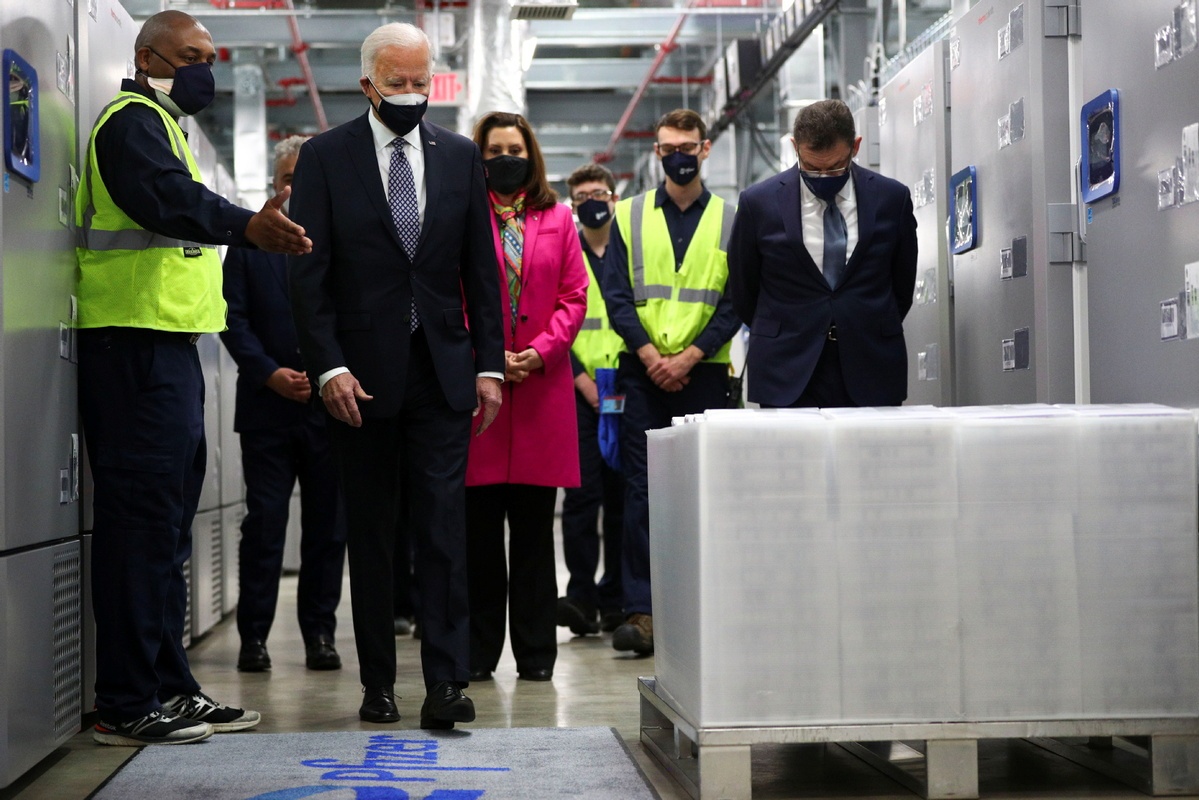 US President Joe Biden looks at a pallet of vaccines as he tours a Pfizer manufacturing plant producing the coronavirus disease (COVID-19) vaccine in Kalamazoo, Michigan, US, February 19, 2021. (Photo: Agencies)

The disruptions caused by frigid temperatures, snow and ice left the White House and states scrambling to make up lost ground as three days' worth of vaccine shipments were temporarily delayed. The president's trip to see Pfizer's largest plant had been pushed back a day due to a storm affecting the nation's capital.

At the Michigan plant, Biden walked through an area called the "freezer farm," which houses some 350 ultra-cold freezers, each capable of storing 360,000 doses of the Pfizer-BioNtech vaccine. Double-masked, the president stopped to talk with some of the workers, but it was difficult for reporters on the trip to hear what was said.

Earlier in the day, White House coronavirus response adviser Andy Slavitt said the federal government, states and local vaccinators are going to have to redouble efforts to catch up after the interruptions. The setback comes just as the vaccination campaign seemed to be on the verge of hitting its stride. All the backlogged doses should be delivered in the next several days, Slavitt said, still confident that the pace of vaccinations will recover.

Biden has set a goal of administering 100 million shots in his administration's first 100 days, and it seemed likely that could be easily accomplished before the storms.

The plant Biden toured, near Kalamazoo, produces one of the two federally-approved COVID-19 shots. According to the CDC, the two-dose Pfizer-BioNtech vaccine has been administered about 30 million times since it received emergency use authorization from the Food and Drug Administration on Dec. 11.

Nonetheless bad weather forced many injection sites to temporarily close, from Texas to New England, and held up shipments of needed doses. In Memphis, a city where some of the doses are stranded, the storm stymied 77-year-old Bill Bayne in his pursuit of his second dose. He got his first shot Jan. 29 and was told he'd hear back about the second sometime this week. With local vaccination sites shut down, no notification came.

Bayne said the eight inches of snow outside his home is the most he's seen in 50 years of living there.

"I want that shot bad enough," Bayne said. "I would've gotten there some way." White House adviser Slavitt said the 6 million doses delayed won't spoil and the vaccine is "safe and sound" under refrigeration.

But as shipments resume and scale up, vaccinators in communities across the country are going to have to work overtime to get shots into arms. "We as an entire nation will have to pull together to get back on track," Slavitt told reporters at the White House coronavirus briefing.

Slavitt said about 1.4 million doses were being shipped Friday as the work of clearing the backlog begins.

A confluence of factors combined to throw off the vaccination effort. First, shippers like FedEx, UPS, and pharmaceutical distributor McKesson all faced challenges with snowed-in workers. Then, said Slavitt, road closures in many states kept trucks from delivering their assigned doses of vaccine. And finally, more than 2,000 vaccination sites were in areas with power outages.

Still, the government is going ahead with plans to open five new mass vaccination centers, one in Philadelphia, and four others in the Florida cities of Miami, Orlando, Tampa and Jacksonville.

The US had administered an average of 1.7 million doses per day in the week that ended on Tuesday, evidence that the pace of the vaccination program was picking up. Now, the question is how long it will take to recover from the impact of the weather-related delays. Press secretary Jen Psaki said the White House was closely monitoring vaccine deliveries and working with manufacturers, shipping companies and states to speed their distribution.

The delays were so severe that Massachusetts Gov. Charlie Baker on Thursday suggested he would explore sending his state's national guard to collect doses from icebound shipping hubs in Memphis, Tennessee, and Louisville, Kentucky.

The Republican governor said the state "may have some real issues with supply delivery this week," and "we have been told it would be a few days late, based on some of the issues around weather in other parts of the country." The Virginia Department of Health reported Thursday that it was expecting delays on about 90% of its expected 120,000 doses this week and warned that the delays could cascade into next week.

"Even if the roads are clear in Virginia, the fulfillment of orders and the movement of these vaccine and ancillary supplies may be delayed in other parts of the country," the department said in a news release.

In North Carolina, none of the more than 163,000 first and second doses of the Moderna vaccine scheduled to arrive this week have been delivered by Biden's administration, the state health department said. The state also noted that only a limited number of the nearly 127,000 expected Pfizer vaccines have been shipped.

Oklahoma moved to reschedule vaccine clinics to this weekend, when it expects its 110,000 doses to be delivered, aiming to make up appointments from this week.

The ripple effects extended far beyond areas experiencing winter weather. In Arizona, the bulk of the state's anticipated shipment of Moderna doses was delayed until early next week, forcing the postponement of some vaccination appointments.

The White House is encouraging states to extend hours for vaccination clinics once they reopen and to swiftly rebook postponed appointments.

"We want to make sure that as we've lost some time in some states for people to get needles in arms, that our partners do all they can to make up that lost ground," said coronavirus coordinator Jeff Zients.