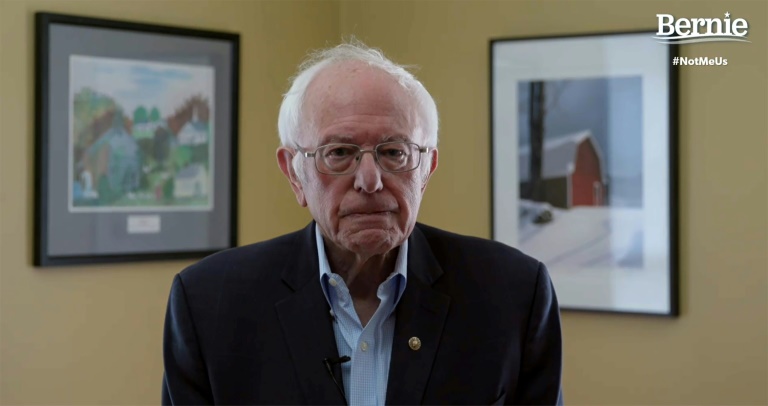 In this video still image from the Bernie Sanders Presidential Campaign, Sanders announces the suspension of his presidential campaign. (Photo: AFP)

The feisty 78-year-old democratic socialist shook up the 2020 race with his relentless pursuit of "economic justice" for all Americans and a demand for universal health care.

But he acknowledged his campaign had fallen short, as party voters determined Biden would be a stronger candidate to go up against Trump in the general election.

"I have concluded that this battle for the Democratic nomination will not be successful," Sanders told supporters in a livestream from his home, where he has remained for the bulk of the coronavirus pandemic that put all in-person campaigning on hold.

"Vice president Biden will be the nominee," he said, adding that he congratulated his rival, a "very decent man, who I will work with to move our progressive ideas forward."

Sanders, who challenged Hillary Clinton for the party's nomination in 2016, mounted a formidable 2020 bid.

He raised astonishing amounts of money from record numbers of donors, becoming the frontrunner early this year and earning the most votes in the first three state-wide contests.

But he was eclipsed by a surging Biden, who won the vast majority of remaining primaries and now holds a commanding lead in the all-important race for delegates who choose the nominee.

Sanders brought his liberal ideological platform -- including a call for universal health care and a $15 hourly minimum wage -- into the mainstream.

AFP/File / Mandel NGANDemocratic presidential hopefuls former US vice president Joe Biden (L) and Senator Bernie Sanders greeted each other with a safe elbow bump before the start of the 11th Democratic Party 2020 presidential debate on March 15, 2020

"Together we have transformed American consciousness as to what kind of nation we can become, and have taken this country a major step forward in the never-ending struggle for economic justice," Sanders said.

Several lawmakers have come out in support of his policies, and Biden has shifted leftward to incorporate some Sanders positions, although he does not support Sanders's Medicare for All plan.

Biden immediately hailed Sanders as "a good man, a great leader, and one of the most powerful voices for change in our country."

He urged Sanders supporters to join his campaign, which already has the backing of nearly all other ex-rivals in the race including senators Kamala Harris and Amy Klobuchar, and former Indiana mayor Pete Buttigieg.

"I see you, I hear you, and I understand the urgency of what it is we have to get done in this country," Biden said in a statement to Sanders and his supporters.

"I hope you will join us. You are more than welcome. You're needed."

Trump made his own pitch for Sanders's supporters, though in a more abrasive tone.

"Bernie Sanders is OUT!" the president posted on Twitter. "The Bernie people should come to the Republican Party, TRADE!" Trump said.

Trump won the 2016 election with help from disaffected working-class voters who believed they were being left behind by politicians in Washington.

Sanders also appeals to those voters.

He said he would not remain in an unwinnable campaign that would "interfere" with important anti-coronavirus work while the country is gripped by crisis.

Biden said his focus is on ending the pandemic, but promised to continue campaigning despite the logistical challenges.

"First things first: how we're going to keep America safe and get this crisis under control and provide economic assistance," he said during a virtual fundraiser.

'Strengths where I have weaknesses'

And he repeated a pledge to choose a woman as his running mate -- a topic on which he said he has asked former president Barack Obama for advice.

At a second virtual fundraiser later in the day, he seemed to imply he had an eye on former rival Harris, who had hoped to become the first black woman president.

The two had one particularly memorable clash on a debate stage before she dropped out of the primary in December and later endorsed his candidacy.

"And I'm so lucky to have you as part of this, this partnership going forward," Biden said of 55-year-old Harris, who also made a virtual appearance Wednesday.

"We can make a great deal of difference, and the biggest thing we can do is make Donald Trump a one-term president. So I'm coming for you, kid," Biden said.

Trump injected his own comments into his rivals' contest during a coronavirus briefing, wondering why Obama had not yet endorsed his former vice president, who Trump regularly dismisses as "Sleepy Joe."

"He knows something that you don't know," Trump warned voters of Obama's silence so far.

But Obama did not endorse the previous Democratic presidential candidate Hillary Clinton, his former secretary of state, until June 2016, after it became clear she would be the party's nominee.

Sanders stressed he would remain on the ballot and seek to gain as many delegates as possible in order to "exert significant influence" over the direction of the party.

And while Biden may be to the center of Sanders, former Obama team member Jon Favreau pointed out last month that Biden "will run on the most progressive platform of any Democratic nominee in history," crediting Sanders and his supporters for that change in the party's ideology.