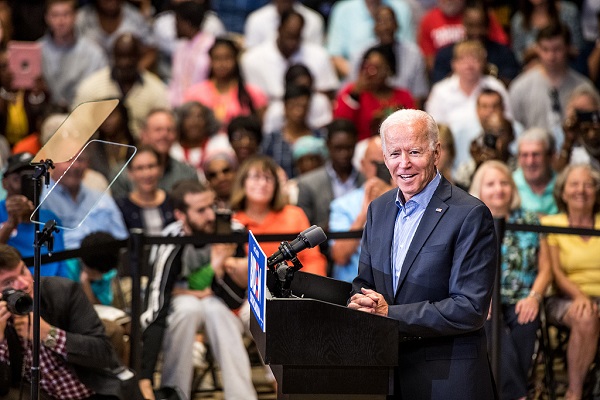 U.S. media reported that an unidentified intelligence official filed a whistleblower complaint in mid-August, alleging that Trump communicated with a foreign leader and made an unspecified "promise." The complaint was filed with the inspector general for the intelligence community, an independent watchdog.

"If these reports are true, then there is truly no bottom to President Trump's willingness to abuse his power and abase our country," Biden, former U.S. vice president, said in a statement released Friday evening.

"This behavior is particularly abhorrent because it exploits the foreign policy of our country and undermines our national security for political purposes," Biden said.

At least part of the complaint involved Ukraine, The Washington Post and The New York Times both reported, citing anonymous sources.

House Democrats have been probing a July phone call between Trump and Ukrainian President Volodymyr Zelensky to see whether Trump and his attorney Rudolph Giuliani sought to manipulate Kiev into helping his re-election campaign.

The Wall Street Journal, in an exclusive report Friday, said that Trump had urged Zelensky roughly eight times in the phone call to work with Giuliani in seeking information about Biden's son, Hunter Biden, that could be damaging to Biden senior's campaign.

According to the Journal report, Giuliani had said in an interview that he met with top Ukrainian officials in June and August and discussed the prospect of an investigation into Biden's dealings with a Ukrainian gas company where his son served as a board member during his vice presidency.

Biden, during his trips to Ukraine as vice president, had pressured the Ukrainian government to oust former prosecutor general Viktor Shokin, who had investigated the gas company, the Journal said, adding that Giuliani suggested that the former vice president's motivation was to protect his son.

Giuliani defended the possibility of Trump urging Zelensky to scrutinize Biden, tweeting late Thursday that "a President telling a Pres-elect of a well known corrupt country he better investigate corruption that affects US is doing his job."

Biden, for his part, lashed out at the assertions alleging his wrongdoing concerning Ukraine. "Not one single credible outlet has given any credibility to these assertions. Not one single one," he was quoted by the Post as saying after a campaign event Friday.

"At minimum, Donald Trump should immediately release the transcript of the call in question, so that the American people can judge for themselves, and direct the Office of the Director National Intelligence to stop stonewalling and release the whistleblower notification to the Congress," Biden said in the statement.

Acting Director of National Intelligence (DNI) Joseph Maguire has been withholding the whistleblower complaint from Congress. 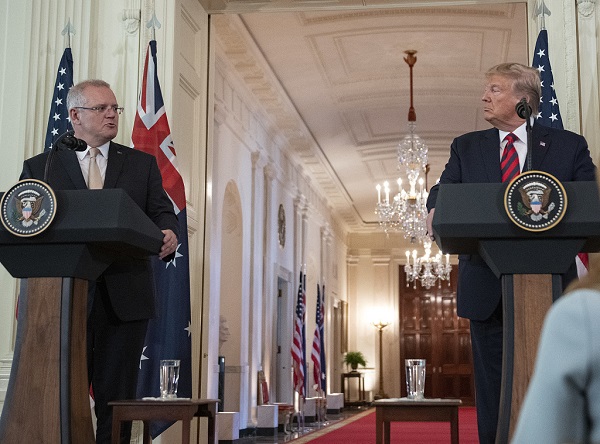 During a joint press availability in the Oval Office with visiting Australian Prime Minister Scott Morrison on Friday, Trump said that his conversations with leaders around the world were "always appropriate ... at the highest level, always appropriate."

"It's just another political hack job. That's all it is," Trump said of the complaint. He said he didn't know the identity of the whistleblower. "I just hear it's a partisan person, meaning it comes out from another party."

The president said that it didn't matter what he discussed with Zelensky, and that the phone call was "a beautiful conversation."

He reiterated the need to investigate Biden's effort to oust the former Ukrainian prosecutor general. "Somebody ought to look into Joe Biden's statement, because it was disgraceful, where he talked about billions of dollars he's not giving to a certain country, unless a certain prosecutor is taken off the case."

Also on Friday, House Speaker Nancy Pelosi urged the release of the whistleblower complaint. "The President and Acting (DNI's) stonewalling must end immediately, and the whistleblower must be provided with every protection guaranteed by the law to defend the integrity of our government and ensure accountability and trust," she said in a statement.

House Intelligence Committee Chairman Adam Schiff, a Californian Democrat, also demanded that Congress get access to the complaint. He warned Thursday of possible legal action while lambasting the decision by Maguire, the acting DNI, to conceal the information.

Michael Atkinson, the inspector general for the intelligence community, met behind closed doors with the House Intelligence Committee on Thursday, according to the Journal report, but he didn't reveal the substance of the complaint, nor did he say whether it involved the president.