WORLD Biden: US Congress should protect abortion rights, if necessary

Biden: US Congress should protect abortion rights, if necessary 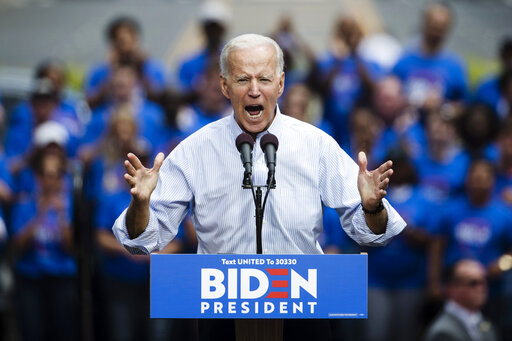 The hot-button issue has shot to the forefront of the Democratic primary following a spate of new Republican-backed state laws curbing access to abortion. With all the two dozen Democratic White House hopefuls supportive of abortion rights, the debate in the party has centered on how aggressive they should be if the Supreme Court were to eventually overturn legalized abortion nationwide.

Biden released a video on Thursday blasting the GOP-backed state laws as "pernicious" and "wrong." He stopped short in the video of endorsing congressional action and offered no specifics on how he would defend Roe v. Wade, the landmark 1973 Supreme Court decision that is now potentially threatened with new legal challenges.

Asked by The Associated Press whether Biden believed the high court decision should be codified in law, the campaign initially pointed to the video, then later added that the former vice president would support legislation "should it become necessary." A campaign aide then clarified that Biden would support action immediately, regardless of whether the Supreme Court overturned Roe.

The campaign's responses highlight what Biden, a devout Roman Catholic, once called his "middle of the road" approach on abortion. As a young senator, he expressed reservations that the Supreme Court "went too far" in its abortion decision. Since then, he's joined the mainstream of the Democratic Party in defending Roe, though as a senator he sometimes voted with abortion-rights foes on bills related to late-term terminations.

As a moderate figure in a party whose loudest factions often embrace more doctrinaire positions, Biden is already walking a tightrope in the Democratic Party. And his evolving statements on abortion over his four decades in politics could give an opening to rivals who have seized on the Republican push to overturn Roe as a way to affirm their commitment to abortion rights.

Sens. Kirsten Gillibrand of New York, Cory Booker of New Jersey and Elizabeth Warren of Massachusetts endorsed new federal laws safeguarding women's right to a legal abortion after Alabama passed a statute that amounts to an outright abortion ban. Sen. Kamala Harris of California also has supported the codification of Roe on the campaign trail, and Sen. Bernie Sanders of Vermont told the AP on Tuesday that he backs federal lawmaking on abortion rights.

Several of the senators visited the steps of the Supreme Court on Tuesday for one of hundreds of nationwide rallies organized by activist groups to protest state-level abortion restrictions. Gillibrand urged an energetic crowd of more than 100 people to "organize, advocate and vote" in order to ensure abortion rights are protected.

Biden did not attend such a rally Tuesday, instead releasing the video as he was in Orlando, Florida, for a campaign fundraiser.

"What this is all about is trying to get an appeal to the Supreme Court in the hope that the conservative justice the president has in fact put on the court will vote to overrule Roe v. Wade, the law of the land," Biden said. "It's wrong. It's pernicious. And we have to stop it."

Biden has long had to navigate the complicated politics of abortion.

Referencing his faith, he's noted often that he believes his church's teachings that abortion is morally wrong but added that shouldn't dictate public policy.

"I refuse to impose my religious beliefs on other people," he said in his Tuesday email to supporters.

As a young senator when Roe was first decided, Biden worried that the decision "went too far," a quote that was resurrected and redistributed on social media earlier this year. He later became a staunch defender of the high court decision.

"I've stuck to my middle-of-the-road position on abortion for more than 30 years," he wrote in his 2007 book "Promises to Keep." ''I still vote against partial birth abortion and federal funding, and I'd like to make it easier for scared young mothers to choose not to have an abortion, but I will also vote against a constitutional amendment that strips a woman of her right to make her own choice."

He was referring in part to his decades of support for the Hyde Amendment, which has forbidden government insurance programs from covering abortion. He was captured on video in recent weeks telling an activist he no longer supports the Hyde Amendment.