Three of the four CEOs of major American tech companies testified on Capitol Hill that they had no knowledge of technology theft by China at their businesses. 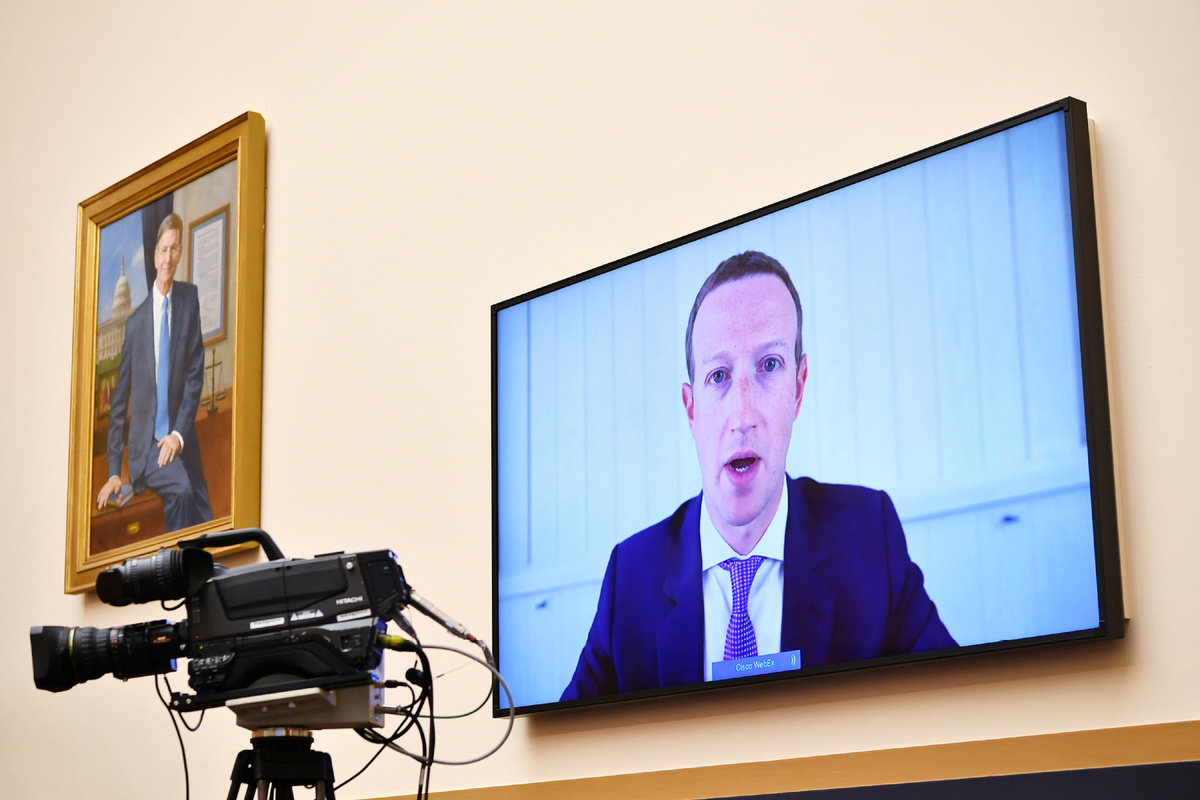 Facebook CEO Mark Zuckerberg testifies before the House Judiciary Subcommittee on Antitrust, Commercial and Administrative Law during a hearing on "Online Platforms and Market Power", in the Rayburn House office Building on Capitol Hill, in Washington, US, July 29, 2020. (Photo: Agencies)

The testimony Wednesday was telling at a time when Chinese companies are facing national security accusations by the US on numerous fronts, from telecom giant Huawei to popular social media video app TikTok.

"I know of no case of ours where it occurred," Cook replied to the question posed by Representative Greg Steube, a Florida Republican. "I can only speak to firsthand knowledge."

During Cook's opening statement, he called iPhone maker Apple "a uniquely American company". But he also praised Shenzhen-based Huawei, which the US has repeatedly worked to portray as a national security threat and has coaxed some of its allies not to use the gear of the company, a leader in 5G (fifth-generation) mobile wireless technology.

"We also know that customers have a lot of choices and that our products face fierce competition," Cook said. "Companies like Samsung, LG, Huawei and Google have built successful businesses with different approaches. We're OK with that. Our goal is the best, not the most."

"I have no firsthand knowledge of any information stolen from Google," said Pichar of the company that runs the world's most widely used search engine.

Bezos, the world's richest person who runs an omnipresent e-commerce company, mulled the question out loud before answering that it was something, "I've read reports of, but don't have personal experience."

Republican Representative Matt Gaetz of Florida asked whether all the companies embraced American values, and they said they did.

Gaetz also asked about Google's artificial intelligence center in China and about the company's relationships with Chinese universities.

"Why would an American company with American values so directly aid the Chinese military but have ethical concerns about working with the US military?" Gaetz asked.

Pichai replied: "We are not working with the Chinese military. It's absolutely false. … We have clarified what we're doing in China compared to our peers — it is very, very limited in nature. Our AI work in China is limited to a handful of people working on open-source projects."

Zuckerberg said the allegations of technology theft were "well documented", but didn't provide any specific examples.

He said the fastest-growing app in the world is TikTok, which is owned by the Chinese company ByteDance.

"History shows that if we don't keep innovating, someone will replace every company here today. … If you look at where the top technology companies come from, a decade ago, the vast majority were American. Today, almost half are Chinese."

Zuckerberg's testimony seemed at odds with his previously expressed ardor for China.

In October 2014, he held a 30-minute Q&A session entirely in Mandarin at Tsinghua University in China, when he had joined the school's advisory board.

"I'm very glad to be in Beijing," he said to the audience that day. "I love this city. My Chinese is really a mess, but I study using Chinese every day."

At a Canada-China Economic Forum on Monday, Paul Evans, a professor in the School of Public Policy and Global Affairs at the University of British Columbia, said the ban on Huawei's 5G technology is just "the tip of a very large iceberg in the chilly waters of techno-nationalism".

"Techno-nationalism … blurs the distinction between economic advantage, military capability and technological and scientific capacity. It treats them all as matters of national power and national security," Evans told the forum.

Evans said that US techno-nationalism is about maintaining "maximum spectrum dominance" in sectors ranging from telecommunications and artificial intelligence to biomedicine.

"I think the US is worried not at all about trade imbalances and intellectual property. It is worried and upset about a certain kind of Chinese technological prowess, and the most fear is from China's innovation capacity," he said.

In December 2018, Huawei CFO Meng Wanzhou, the daughter of the company's founder Ren Zhengfei, was arrested by Canadian authorities at the Vancouver International Airport at the request of the US. She has been held under house arrest in Vancouver.