Katmandu (People's Daily) - “I believe that the visit of his Excellency Xi Jinping will elevate the existing bilateral relations to a new height,” Nepalese President Bidya Devi Bhandari told People’s Daily on Wednesday before the Chinese president’s state visit to the country. “This is also a historical opportunity for us, ” Bhandari said. 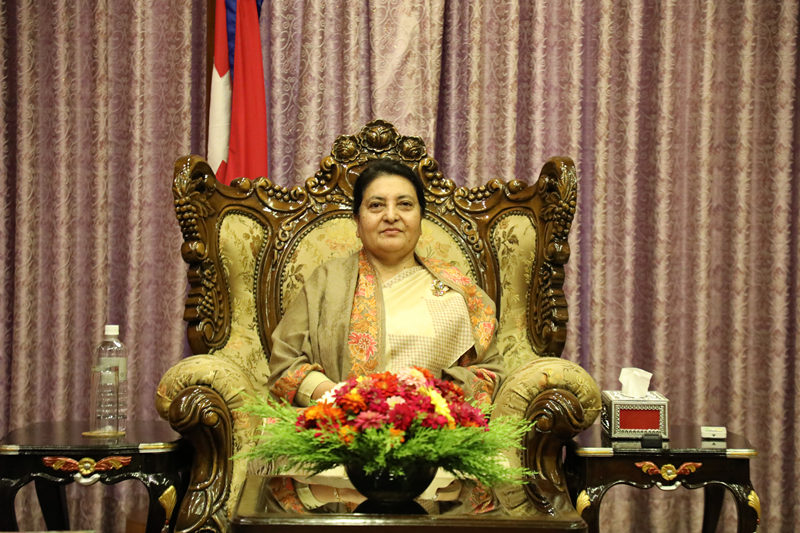 Bhandari said Xi’s visit to Nepal has been attached high importance, and the Nepalese people have been doing all necessary preparation accordingly.

Bhandari said Nepal has maintained its unwavering commitment to the One-China Policy. The government is committed to not allowing any activities targeted against China in our territory. This has also been Nepal’s national policy. And China has always embraced the principles of peaceful co-existence, cooperation and non-interference in the conduct of bilateral relations between the two countries.

Bhandari pointed out that Nepal and China have been enjoying excellent relations for centuries. The relations that existed even before the beginning of formal relations have become multi-dimensional, expanding to economic, socio-cultural and people-to-people level after the establishment of diplomatic relations.

In the days to come, mutual trust and understanding between Nepal and China shall further be consolidated, Bhandari said.

In the interview, Bhandari extended her congratulations and greetings on the occasion of 70th anniversary of the founding of the People’s Republic of China.

“China’s development has been an inspiration to all countries around the world and has inspired peace loving people for prosperity. The progress made by about one fourth of humanity is incomparable. Other communities around the world have also been benefitted from China’s unparalleled achievements,” she said.

Bhandari told People’s Daily that increasing the impact of the Belt and Road Initiative (BRI), put forward by President Xi, is being felt globally. She said Nepal has decided to cooperate under the BRI with utmost priority since the initiative has helped increase connectivity between different countries, which has also increased cross cultural and people-to-people engagements.

Furthermore, Bhandari underlined that relations at the emotional level will also be established among different countries and peoples.

“We believe that Nepal and its people will benefit from the initiative. Proper implementation of the BRI will benefit the whole neighborhood,” Bhandari said.