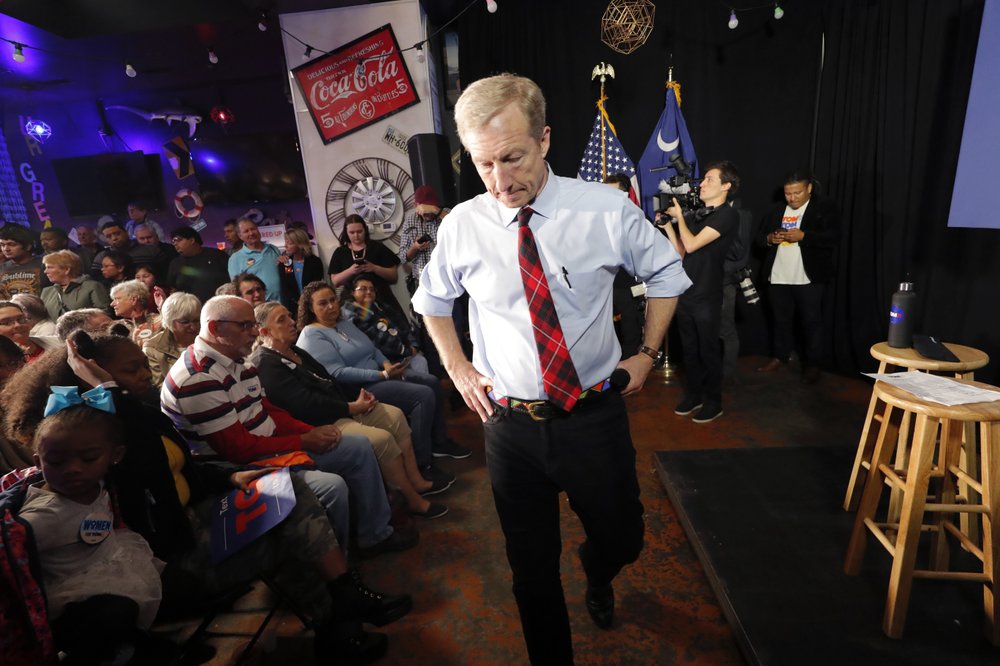 Billionaire activist Tom Steyer, who poured millions of dollars into his Democratic presidential campaign, is ending his bid after a third-place finish in the South Carolina primary.

Steyer announced Saturday night in Columbia that he was dropping out of the White House race. After spending nearly $24 million on television advertising in the state, he finished behind former Vice President Joe Biden and Vermont Sen. Bernie Sanders on Saturday. It was Steyer’s best showing in the 2020 race but not enough to keep him in the contest.

“Honestly, I can’t see a path where I can win the presidency,” Steyer said.

Steyer rose to national prominence as a climate change activist and by investing heavily in a campaign to impeach President Donald Trump. His presidential campaign was heavily focused on South Carolina, where he sought to appeal to black voters by decrying yawning inequalities in American life that he said were caused by racism.

“Am I going to continue to work on every single one of these issues?” Steyer said in announcing his departure. “Yes, of course I am. I’ve never stopped.”

With a net worth estimated by Forbes as $1.6 billion, Steyer was a presence in the Democratic contest well before he made his candidacy official in July 2019, blanketing the airwaves with $10 million in television ads advocating for Trump’s impeachment.

Steyer’s “Need to Impeach” campaign spawned speculation that the 62-year-old would go a step further and also challenge Trump at the ballot box. In the meantime, though, the near-constant ads maintained high visibility for Steyer, who also launched a multicity town hall tour and petition campaign. He traveled to Des Moines, Iowa, in January 2019 to say that he wouldn’t run for the White House, only to change his mind six months later and enter the race.

Officially in the contest, Steyer said he was prepared to spend $100 million toward his presidential ambitions and would remain committed to giving at least $50 more million this election cycle to outside groups he helped create, including Need to Impeach. But Steyer’s wealth was characterized as a liability in a puritanical Democratic primary, with both Bernie Sanders and Elizabeth Warren decrying the presence of billionaires in the 2020 race.

Warren, who didn’t mention Steyer by name, tweeted after he announced his candidacy: “The Democratic primary should not be decided by billionaires, whether they’re funding Super PACs or funding themselves.” Sanders said that while he may “like Tom personally,” he is “a bit tired of seeing billionaires trying to buy political power.” Both also mentioned it in fundraising appeals.

But Steyer’s wealth provided him with the ability to campaign nationwide, hiring full complements of state-based staff and continuing to flood the airwaves. Through Feb. 25, Steyer had spent about $186 million on ads, according to the tracking firm Advertising Analytics, though that figure would soon be dwarfed by former New York City Mayor Michael Bloomberg’s even more massive spending.

Steyer’s late entry caused him to miss the first few Democratic debates, but he began qualifying for the debates starting with the fourth one and made every stage but one from then on, appearing with his trademark red tartan tie. He earned fewer airtime minutes than others but made his mark particularly as it pertained to his top issue, climate change.

Even still, Steyer continued to pivot back to his criticism of Trump, reiterating his pre-candidacy calls for ousting the Republican from the White House, either electorally or via impeachment, as that process got underway in Washington.

On the trail, Steyer focused much of his effort in South Carolina, home to the first Southern primary, as well as the first state to test a candidate’s performance with a heavily black electorate. His wife relocated to the state for the duration of his campaign, and he spent almost $24 million on TV advertising — more than all the other candidates combined — in his quest for his first top finish in four contests, targeting minority-owned media in particular with a half-million-dollar spend on black radio.

He racked up notable endorsements, including the chiefs of the Legislative Black Caucus and Democratic Black Caucus, as well as the Greenwood, South Carolina, woman behind President Barack Obama’s vaunted campaign chant, “Fired up, ready to go.”

In his policy rollouts and campaign speeches in the state, Steyer frequently noted his view that race, and what he saw as race-based injustices, were an undercurrent for many societal problems, including access to health care, environmental well-being and the need for criminal justice reform.

“There’s a significant racial component in almost every single policy area,” Steyer told reporters during a South Carolina bus tour in mid-January. “I think that there’s been a desire for a long time to bury this and not talk about it, and hope that it goes away. It’s not going away.”

But the road wasn’t always smooth, there or in other early voting places. A top Steyer aide in South Carolina was forced to resign in November after it was revealed that he accessed volunteer data from the campaign of Democratic rival Kamala Harris, who dropped out in December. And a few days later, a top Steyer aide in Iowa resigned after The Associated Press reported he had privately offered campaign contributions to local politicians in exchange for supporting Steyer.

While his first political bid, the presidential effort was not the first time Steyer had considered running for office. He eyed bids for governor of California in 2018 and the Senate in 2016.