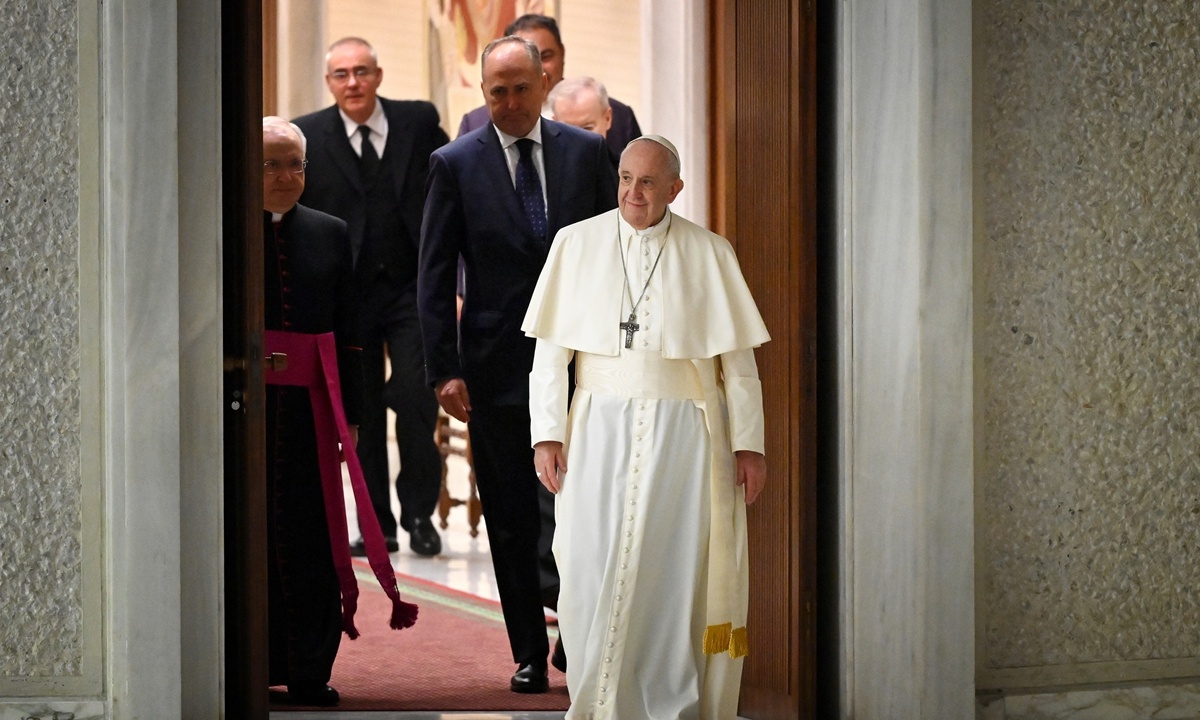 Pope Francis arrives to lead his weekly general audience in the Paul VI hall at the Vatican on Wednesday. Wednesday Papal Audiences usually take place in Saint Peter's Square at 10 or 10:30 am and last about 90 minutes. (Photo: agencies)

The renewal of a provisional bishop agreement between China and the Vatican not only reflects strong and healthy momentum between the two countries in bishop appointment, but also carries special importance of the Holy See's goodwill to move forward relations with China, despite that the Vatican faces mounting pressure to abolish the deal, observers said.

Italian media Corriere della Sera was the latest to report that China and the Vatican will announce on Thursday the renewal of the bishop agreement, which was signed in September 2018.

Although no official announcement has been made, and the Holy See Press Office did not respond to the Global Times' inquiry as of press time, observers who are paying close attention to the matter told the Global Times that they are sure about the renewal., despite increasing pressure on the Vatican to suspend the deal.

China and the Vatican have been communicating, and the provisional agreement remains the strong basis for continuing the dialogue, Antonio Spadaro, an Italian Jesuit priest and editor-in-chief of La Civiltà Cattolica, a Rome-based periodical, told the Global Times, noting that there is no reason to think that the agreement should be renewed in an uneventful way.

The renewal of the agreement would send the Chinese Catholic Church a clear signal that the Vatican is seeking a healthy development in China, Zhan Silu, vice chairman of the Bishops' Conference of the Catholic Church in China and bishop of the diocese of Mindong, East China's Fujian Province, told the Global Times.

Previously, US Secretary of State Mike Pompeo warned that the Pope would lose his "moral authority" if he continued the deal, ahead of the former's visit to Italy and the Vatican in September. But when he arrived in the Vatican, he was met with a cold shoulder from the Pope.

Spadaro said that pressure on the Holy See not to renew the agreement gives the agreement special importance, and is testament to the goodwill to move forward with confidence along the road taken.

Della Sera also indicated that if the agreement pushes through, the two parties may be able to establish formal diplomatic ties in two years' time.

But observers remain cautious on this proposal. Wang Meixiu, a retired expert specializing in Catholic studies at the Chinese Academy of Social Sciences in Beijing, doubts if China and the Vatican could achieve diplomatic ties within two years. "The Holy See may want to, as it cares about the church… but China has more concerns."

She said after the renewal, how the agreement is implemented determines the future. In China, new bishop candidates should be elected for the Pope to approve and appoint, Wang said. "This could further promote Chinese Catholics' love for the country and the church to be a good citizen, as well as boost the confidence of China and the Vatican."