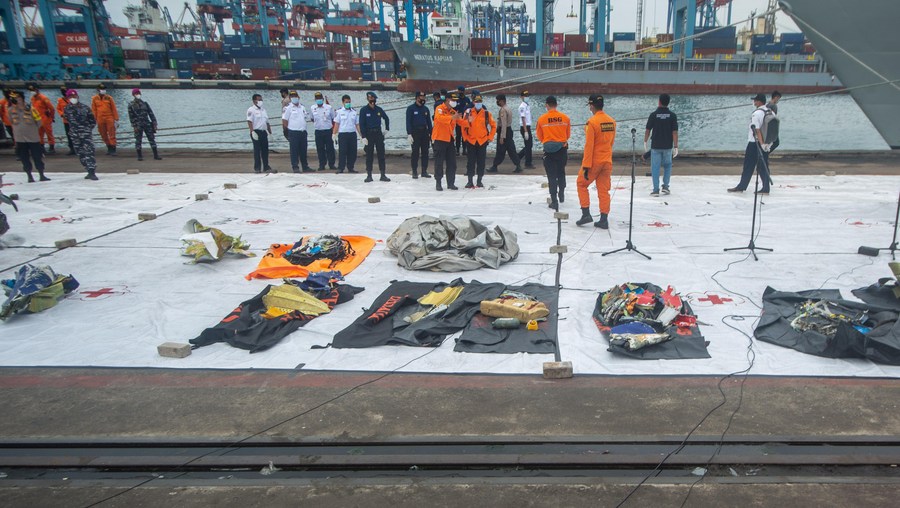 Indonesia's National Transportation Safety Committee display the debris of the Sriwijaya Air plane found during the search at the Search and Rescue Command center at Tanjung Priok Port in Jakarta, Indonesia, on Jan. 11, 2021. (Photo: Xinhua)

The divers also found the underwater locator beacon (ULB) of the FDR and the ULB of the cockpit voice recorder (CVR) in the area which has been previously spotted, the commander said.

Tjahjanto believed that the position of the CVR would be in a spot around the area.

"I got information from the Navy chief of staff at 4:40 p.m. (Jakarta time) that a black box has been retrieved," he told a press conference at the Jakarta International Container Terminal.

Each FDR and CVR is equipped with an underwater locator beacon.

Head of the National Transportation Safety Committee (KNKT) Soerjanto Tjahjanto said that it would take between two days and five days to download all the contents of the FDR. Then it would be analyzed by the investigators to find out the cause of the fatal flight accident.

The Sriwijaya Airplane with flight number SJ-182 and operated by a budget airline crashed shortly after taking off from the international airport Soekarno-Hatta in Jakarta on Saturday.

The plane with 62 people on board was heading to Pontianak city of West Kalimantan province.